Movie Review: Enjoy Your Ride Through The Sleek, Stylized World of “Drive All Night”

The term “neo-noir” gets thrown around a lot since it’s back in vogue to use shadow play and Dutch angles to convey moral ambiguity. Personally, I believe it’s simple pushback to the MCU, which, while great, is not cinematically or morally challenging. Conversely, DRIVE ALL NIGHT is not only stylish and dark, but lingers in the space between good and bad, and is really enjoyable when it isn’t getting lost in its own pseudo-surrealism. 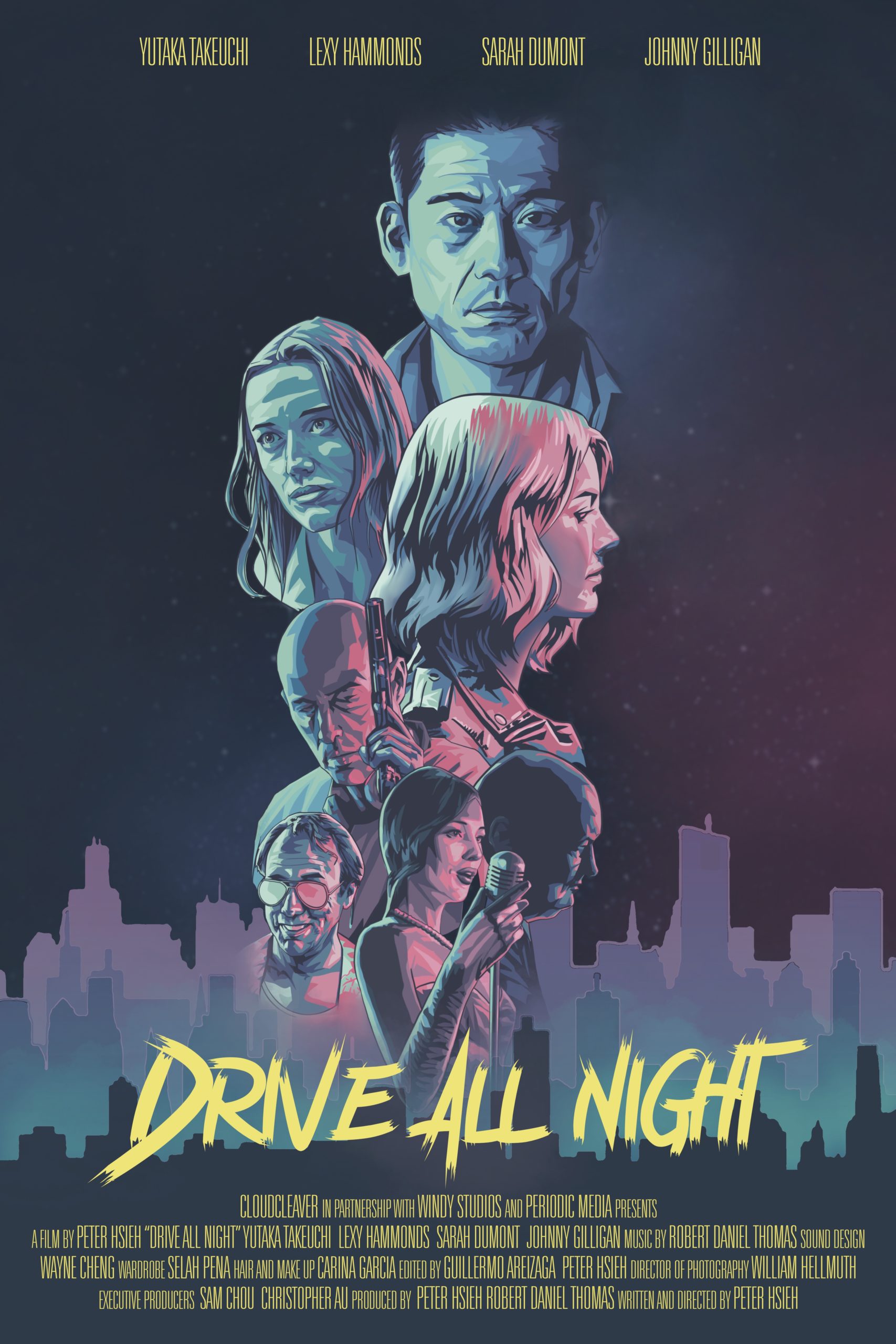 The film follows good-natured but definitely holding a dark secret Dave (Yutaka Takeuchi, The Defenders) who loves to pull all-nighter shifts as a cab driver. Sometimes he takes time out of his schedule to half-heartedly flirt with beleaguered but smiling server Morgan (Sarah Dumont, Scouts Guide to the Zombie Apocalypse). Dave’s auto-pilot existence is complicated by the sudden appearance of Cara (Lexy Hammonds, Crazy Love) who simply hires Dave to drive all night (gosh!) while also visiting increasingly strange locations. There also seems to be a crime lord lurking in the background of the drama, who puts a call out to hunt down a nameless girl, which, it is easy to extrapolate, is Cara. This results in a hitman being hired, who is having trouble hunting her down since she’s, you know, constantly mobile.

Everything that’s just been described is just a loose interpretation of the events, since most scenes are a series of disconnected moments, the logical procession of which is more or less left up to the audience. The plot concerning Cara, who seems to be on a quest of revenge against the crime lord, happens mostly in the background, and the film instead focuses on the burgeoning friendship and romance between she and Dave as he is swayed by her confidence and intelligence and she is pulled in by Dave’s simple goodness. This progression happens in cabs, bars, arcades, and diners, all filled to the brim with neon. As the night goes on, their adventure gets increasingly dreamlike, with characters sometimes floating down bizarre hallways or through space before rejoining us in the “real” world. These disjointed scenes are meant to make the night seem surreal, but frankly, they just seem tacked on to flex some artistic muscle.

The world is strange and stylish, with arcade bars standing in for high-end gangster hangouts. Video games definitely hold a big place in this world, since we are meant to truly marvel at Cara’s intelligence as evidence by her ability to beat Mortal Kombat, or her knowledge of the map 256 glitch from the original Pac-Man. This might have been more impressive trivia in a pre-Ready Player One world, but at this point, everyone and their pet rock knows about this glitch. Still, I love video games, so it’s nice to see them represented as big portions of society instead of just niche hobbies, which most Hollywood films tend to do.

Speaking of video games, a cool part of this film is that all the missing bits of action and plot may be covered in the free DRIVE ALL NIGHT mobile game from Windy Studios. Since the movie’s world is rich and visually stunning, it’s a great way to immerse audiences while also not padding the runtime. It makes a great amount of sense for a movie that so prominently features video games to have a tie-in game itself, and giving it away for free is a classy move since lesser studios might have been tempted to make a quick buck. The free ‘Drive All Night’ game is available today in the App Store for iOS and Google Play Store for Android.

Of course, in a slow burn like DRIVE ALL NIGHT, the charm of the film will be heavily reliant on the acting ability of its leads, so it’s a good thing they got Yutaka Takeuchi and Lexy Hammonds to act the shit out of this. Takeuchi’s Dave is endlessly likable, sweet, and amicable; he seems to really enjoy being in on the adventure, and never seems out of his element. Hammonds’ Cara is also a perfect driving force: aloof, cocky, and mysterious, but also flirtatious and bullheaded. Hammonds creates a fully fleshed-out character that isn’t just a mechanism for shadowy plot points. You like her sometimes, hate her at others, but you never really stop rooting for her.

As long as you can get past the hollow surreal aspects of DRIVE ALL NIGHT you’ll find a charming universe of crime, neon lights, video games, and humans with real struggles. It’s one of the few recent films that actually lives up to the term neo-noir, so if that sounds like your bag, check it out.

Tickets for ‘Drive All Night’ at Cinequest’s virtual screening room are on sale now at www.cinequest.org