With DASHCAM, the question that is often asked of found-footage horror films arises again: Why are the protagonists of so many of these movies made to be assholes? Too often, the person behind the camera-within-the-story, and thus our ostensible identification figure, is a real jerk; occasionally this works when it’s part of a meaningful character arc (as in the current festival fave DEADSTREAM), but usually it just makes following the action a real chore. And so it is with DASHCAM, the second vérité chiller by Rob Savage, who broke out with 2020’s HOST.

I wasn’t as huge a fan of HOST as many critics and fans–I found some of its terror tricks to be overly familiar–but I did appreciate the way its presentation of a Zoom meeting gone awry very effectively tapped into the new anxieties of life under pandemic restrictions, with characters you could identify with. The “heroine” of DASHCAM is also dealing with the stresses of lockdown, and not very well. Annie Hardy plays a same-named vlogger who livestreams a show called BandCar from her vehicle, riffing and rapping based on the comments that scroll up the lower left of her screen. Though she’s piloting a car, she has a mouth like a truck driver and has virulent right-wing views about vaccination, masking, etc. 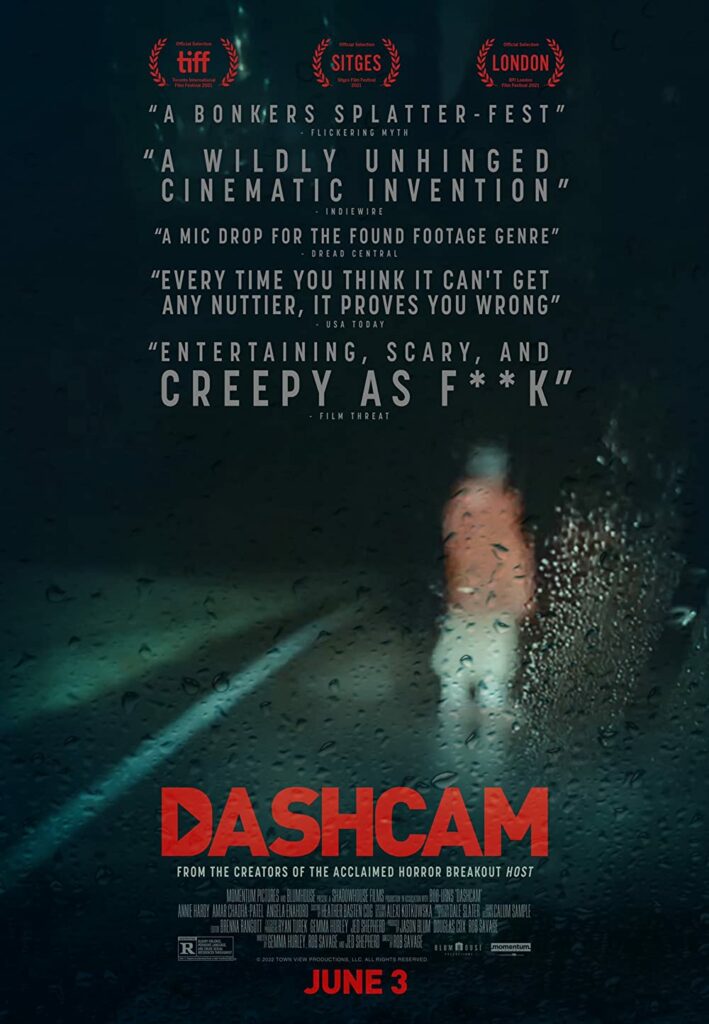 Apparently Hardy is playing an extreme exaggeration of her real-life on-line persona (which I’m not familiar with), but whatever the case, the Annie in DASHCAM quickly establishes herself as a callous, selfish boor, who is tired of having to do things like follow basic public-health precautions in Los Angeles and decides to flee to the UK. (Animal lovers will turn against her early on when she’s seen saying goodbye to her cat and then locking up her apartment, having evidently made no arrangements for the kitty’s care during what will likely be a long absence.) In London, she lets herself into the apartment of former bandmate Stretch (Amar Chadha-Patel) and his girlfriend Gemma (Jemma Moore), and quickly alienates him and everyone else she comes across, including the staff of a restaurant who eject the ranting, screaming Annie when she won’t put a mask on. When Stretch also throws her out, she retaliates by stealing his car, and then answers one of his food-delivery calls, which takes her to a spooky, apparently deserted café.

There are a few moody moments here and elsewhere during the first act of DASHCAM (another occurs in an eerily empty LAX) if you can look past the grating troll at its center–who, of course, dons a MAGA hat at one point. Then it gets to the meat of its horror when it turns out she’s been summoned to deliver not dinner, but an elderly, apparently sick woman named Angela (Angela Enahoro), who soils herself in graphic detail in the back of the car. This gross-out is another turnoff in DASHCAM, beyond the fact that, as Angela is revealed to be more than she appears and the night turns into a nightmare, Annie remains the same obnoxious vulgarian. The horrors she’s confronted with are of the supernatural kind, and the movie misses the chance to tie her ordeal in with her worldview, to confront her about her own excesses. There’s no sense of cosmic justice here, just bad things happening to a bad person it’s impossible to care about.

DASHCAM also falls into a repetitive narrative pattern: Annie (and Stretch, who rejoins her) are confronted by something awful, go running off into the darkness, stop to briefly recover, get confronted by something else awful, etc. At least three times, one or both of them find a potential escape vehicle, only to wind up crashing it in their panic. Savage and co-writers Gemma Hurley and Jed Shepherd attempt to up the ante as they go along, but the tone is so heartless that it’s hard to know whether it’s meant as tragic or dark-comedic when one accident claims the lives of a young couple just coming from their wedding (in the middle of the night during the worst of the pandemic? Uh-huh…). The very fact that DASHCAM is set against one of the worst worldwide calamities in human history, and the only point of view it takes is that of someone as self-absorbed and unfeeling as Annie, feels disingenuous at best and grossly insensitive at worst.

On top of all that, DASHCAM begs another frequent found-footage question, that of why the protagonist keeps recording. We see everything through the phone Annie uses for her BandCar livestream, which somehow keeps streaming even as it repeatedly loses and regains the signal. It’s plausible that Annie and occasionally Stretch keep the phone on so they can use its flashlight to guide them through the darkness, but wouldn’t they turn the camera off to save on battery power? Their gruesome odyssey takes them to a couple of creepy settings, like a derelict amusement park, and Savage offers an occasionally potent image; there’s also fun to be had reading the scrolling comments that offer some satire of Internet culture. Certainly, they’re more entertaining than watching Annie repeatedly saying things like “Shit in my mouth, cocks in my face” as she runs for her life, to increasingly diminishing returns. The final insult is that the movie doesn’t actually end; it just stops, and wraps up with an attempted meta credits sequence that kills any investment we might have had with the story, and turns it into one big joke.