Movie Review: “CURSE OF AURORE” sidelines its own scary subject

Back when I was attending the 2005 Fantasia film festival in Montreal, there were posters everywhere, and I also saw the trailer, for AURORE, a historical drama recounting a case from Quebec’s past as horrific as anything screening at the fest. In the early 1900s, little Aurore Gagnon was consistently and traumatically abused by her father and stepmother, finally succumbing to numerous inflicted injuries at age 10 in 1920. The notoriety around her suffering and fate has lived on down through the succeeding years, and has provided the inspiration–though not enough, unfortunately–for the found-footage fright film CURSE OF AURORE.

CURSE achieves a bit of early verisimilitude by opening with real-life YouTuber Casey Nolan discussing dark web mystery boxes, of the type he has actually explored on his hugely popular Mind Seed TV channel. He has just received a package containing what appears to be forensic evidence of murder and a USB drive, the contents of which make up the rest of the movie. This begins as newly arrived Aaron (Lex Wilson) and Kevin (Jordan Kaplan) are greeted at a Quebec airport by longtime friend Lena (Llana Barron), and we watch through their shared camera as Lena takes them to a family house one town over from Fortierville, where Aurore lived and died. The trio already has a completed feature languishing without distribution, and Lena believes they should adopt Aurore as the subject of a new project. 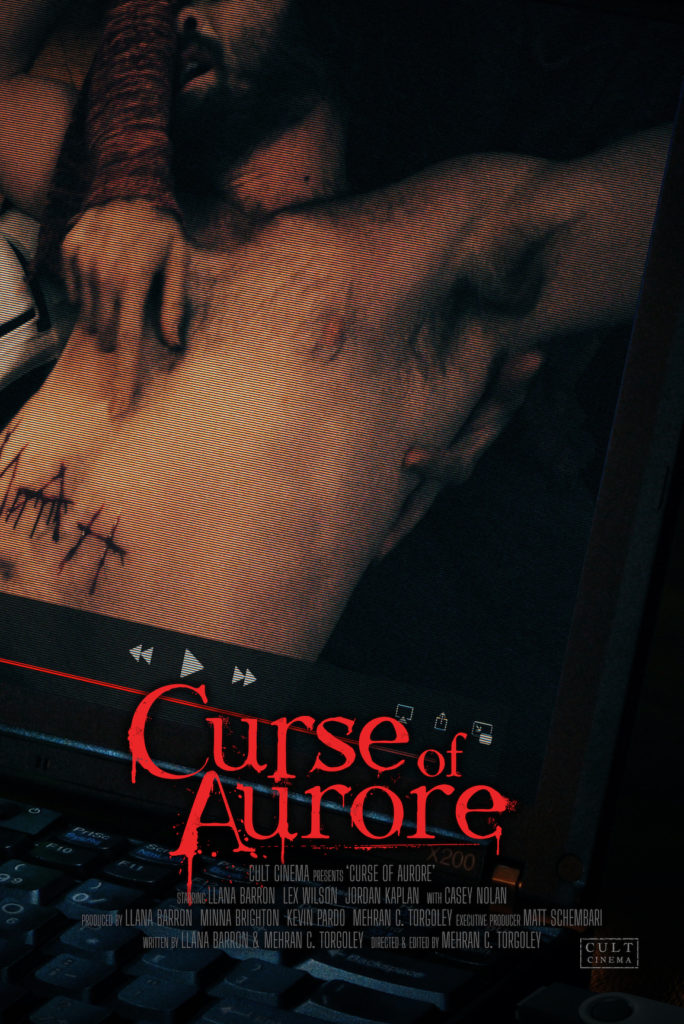 There’s the seed of a good idea here–filmmakers pursuing a real-life tragedy and opening up a dangerous can of worms–but it isn’t sufficiently developed in the script by Barron and director/editor Mehran C. Torgoley. The tone is more travelogue than terror for quite a while, as the friends go shopping, the guys have their first poutine, they visit key sites from Aurore’s life and death, etc. There are hints that they’re venturing into unsettling territory–an overabundance of religious totems in the place they’re staying, a late-night procession into the house next door, some of the locals don’t take kindly to having cameras pointed at them–which remain largely incidental. Even when a late-night drive leaves them stranded in the middle of nowhere, forcing them to seek help at the house of a spiritualist who gives Lena a Tarot reading (no prizes for guessing which card turns up), the situation isn’t milked for as much dread as it could have been.

The three actors are personable with good chemistry, and the time spent with them is pleasant enough, if not very compelling. Every so often, the film digs a little deeper into their characters, most notably in a well-played scene where a drunk Lena confesses her insecurities, but these don’t come to much, and their personality traits are largely plot-driven. Kevin is foolishly kleptomaniacal in ways that will inevitably get them into trouble, and Aaron can be implausibly obtuse: When an image of the ghostly Aurore is clearly visible on video footage of the trio driving, he insists it must be a smudge on the windshield.

It is when they sight this spectre that they decide they should keep consistently shooting in order to catch her again–an idea that could have been introduced sooner, as CURSE OF AURORE, like many of its vérité-horror ilk, doesn’t quite justify its leads keeping the camera running everywhere they go. Similarly, when an old friend of Lena’s turns out to have an uncle who lives in the Gagnon house, and a visit there carries strong intimations of Aurore’s unquiet spirit, you get the feeling this sequence should have occurred at the end of the first act, not past the hour mark.

The movie’s key issue, however, is that Aurore’s specific backstory doesn’t inform the present-day story in any meaningful way. She could have been any dead little girl and it would have no effect on this plot, and there isn’t enough novelty to the long-in-coming horrific/supernatural ingredients to compensate. CURSE OF AURORE is competently put together, and it convinces as found footage (though the addition of digital video glitches is a gimmick that really should have been retired by now), even as what’s on that footage doesn’t take enough advantage of the possibilities it sets up for itself.