Under its specific circumstances, it’s especially appropriate and understandable that the creators of the latest JEEPERS CREEPERS movie have taken it in a different direction than its predecessors. And given the contentiousness among horror fans surrounding those earlier movies, and specifically their director, especially in recent years, the announcement that JEEPERS CREEPERS: REBORN would take place at a horror convention suggested all kinds of provocative possibilities. They could have even directly addressed the large elephant in the room and made a sleazy producer one of the “Creepers.” Instead, the only thing fresh about this movie it that it doesn’t incorporate or reference specific characters or events from the first through third JEEPERS, but otherwise, everything about it is tiresomely familiar.

JEEPERS CREEPERS: REBORN opens with Dee Wallace and ALIEN NATION’s Gary Graham essentially remaking the opening act of the original film, only to then reveal that what we’ve been watching for the last 10 minutes is an online recreation for a true-mysteries series episode about the Creeper. (We’re told this couple “have never been seen since,” begging the question of how anyone knows what happened to them in order to recreate it.) In REBORN’s world, the Creeper is a rural Louisiana legend that has had three movies made about it (wink wink), and Laine (Sydney Craven) and her boyfriend Chase (Imran Adams) are driving to the Horror Hound Weekend, where it will be celebrated. He’s planning to propose during the trip, she’s pregnant but hasn’t told him, and he remains clueless even after she has him suddenly pull over so she can be sick. 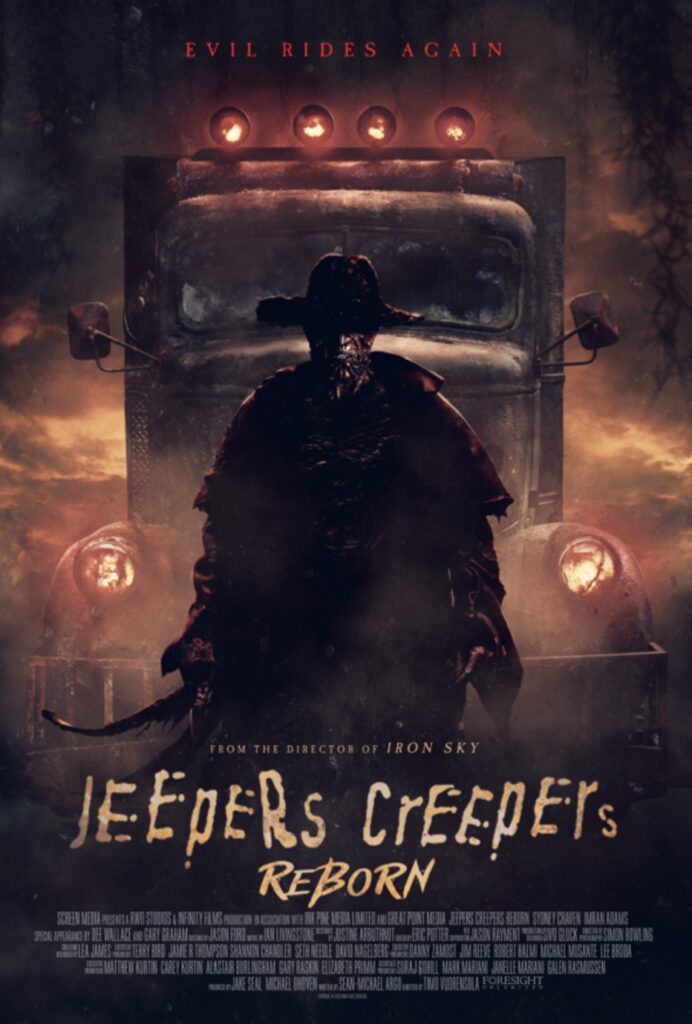 The banalities don’t end with those character beats: Soon Laine and Chase make a stop at a roadside attraction full of arcane items, the proprietor acts weird and calls a conspirator after they leave, and Laine has psychic flashes of herself involved in a scary ritual. These are evidently intended to establish a new mythology surrounding the Creeper, but they never go anywhere, making them the only things worse than clichéd setups, which are clichéd setups with no payoffs. After Laine and Chase check into a hotel, Chase breaks out a bunch of character costumes for them to wear at the festival, and Laine has no interest in them until she does, whereupon she puts on a little horror-fashion show for Chase with ersatz Rob Zombie on the soundtrack.

By this point, some viewers may be ready to check out, and the story hasn’t even gotten to the festival, which doesn’t resemble the real HorrorHound Weekend or any other typical genre convention, but is rather what Chase describes as “The Coachella of cosplay,” albeit on a far smaller budget. It’s an outdoor overnight event where everyone’s in fright garb but a guy can run screaming through the crowd with a knife in his chest and fool onlookers into thinking he’s really been stabbed, and where Laine says, “What if there’s a psycho lurking in the crowd?” while the Creeper hovers in the foreground just to make the point obvious. Only about 10 minutes or so are spent at Horror Hound, before Laine and Chase are manipulated into traveling with some of the staff to the remote Barnabett House, ostensibly the site of an escape-room challenge but actually the Creeper’s lair, where every room is pierced by shafts of light with no discernable source.

Throughout JEEPERS CREEPERS: REBORN but especially at Barnabett House, there’s a chintzy look to the sets, the copious CG and greenscreen environments, and even the Creeper’s outfit and makeup. That makes it an even worse idea to give us so many good looks at the villain from the start, which dissipates any honest mystery about him. Instead, we get Laine’s brother being killed early on when he goes into the woods to “tinkle tailor my soldier spy” (seriously)–and then he’s promptly forgotten about by Laine and the movie–and the narrative settles into a generic stalked-in-the-spooky-house rut for the last half. Here, there’s a low body count and no memorable kills, and Laine at one point is tied down to an altar with a sharp dagger within very easy reach. And if you think that’s groan-worthy, wait till you hear REBORN’s idea of hero-moment dialogue at the climax.

Or don’t. Separating the art from the artist for a moment, the first JEEPERS CREEPERS built genuine tension amidst palpable back-roads atmosphere, while JEEPERS CREEPERS 2 upped the action content to become both scary and exciting. JEEPERS CREEPERS: REBORN has little of the first film’s mood; though set in Louisiana, it appears to have largely been shot in the UK, with several actors struggling with their American accents and only a couple attempting Southern drawls. Their characters elicit no sympathy and the halfhearted attempts to reinvent the Creeper come to naught, climaxing with a setpiece lifted from a Stephen King classic. The filmmakers couldn’t even afford to use the classic “Jeepers Creepers” song; instead, we’re treated thrice to a new tune called “Hungry Eyes,” which, to put it kindly, is no substitute.