Trailers for BOYS FROM COUNTY HELL, the latest offering from director Chris Baugh (Bad Day for the Cut), will try to lure you in with the promise of a high-energy, comedic romp that’s capped off with a battle against the undead. But Shudder’s newest exclusive is a red herring of the most exquisite sort; this is not splat-stick Irish horror. In truth, BOYS FROM COUNTY HELL is an outing with rich, humanistic qualities, the right amount of gore, and a smattering of comedy whose sum is much greater than its parts.

Deep within Ireland’s lush greenery and scenic countryside lies Six Mile Hill. It’s here that locals spin yarns about famed author Bram Stoker’s masterpiece Dracula and how it was inspired, maybe, by the town’s own vampire legend, Abhartach. To shake a bit of coin from morbidly curious tourists, friends Eugene (Jack Rowan), William (Fra Fee), and SP (Michael Hough) lead expeditions out to the supposed gravesite of the fabled creature, an imposing cairn, which happens to be situated on a plot of land belonging to William’s father George (John Lynch). It’s a fairly rote affair that William has grown tired of. He informs his mates of his plans to leave town and strike out in search of a better life, but not before spending a final night imbibing at “The Stoker,” the local watering hole tended by girlfriend Claire (Louisa Harland). On his way home, William is dashed to death in a gruesome manner against the ominous marker and thus begins the first of several deviations from typical vampire traditions that imbue the film with a welcome twist on the mythos. Right around the same time, Eugene’s dad, Francie (Nigel O’Neill) and his construction crew land a contract to develop a new bypass that runs through town right through Abhartach’s assumed gravesite. Despite warnings from nearly everyone, the crew demolishes the site and unleash carnage upon their idyllic haven. 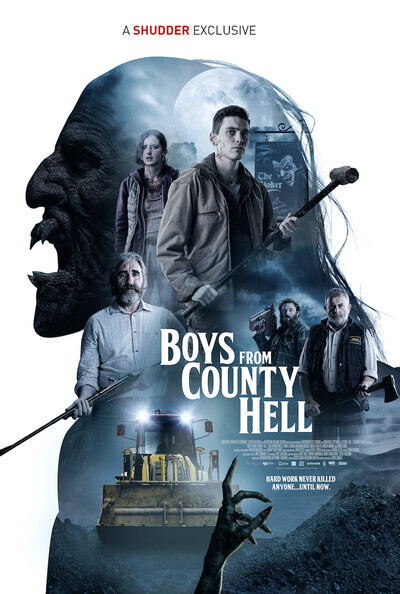 BOYS FROM COUNTY HELL attempts to walk the line between several different genres and while director, Chris Baugh does suffer in its attempts to be too many things to too many viewers. This isn’t a slight against the film, although this is one of those rare cases where an extra 10 or 15 minutes of plot development to flesh out individual ideas would have been beneficial. That being said, it is somewhat odd that promotional materials place such emphasis on the film’s comedy aspects, seeing as how there’s so much to resonate with here beyond comic relief. Make no mistake, there are moments of hilarity, but each is delivered in a manner that feels natural and organic and never in a way that forces other significant qualities into the shadows.

That’s a good thing, too, because the human nature of BOYS FROM COUNTY HELL is where it shines its brightest. The motivations behind a well-wishing father who spurns his son’s listless drift through life, the emotions felt after the loss of a close friend, and the fear instilled in those who know better than to deface the resting place of a long-dead menace; when Baugh wants you to feel these things, he makes sure that you do. But even in attempting to play to so many masters, BOYS FROM COUNTY HELL doesn’t lose sight of what it is. Baugh’s take on vampiric lore breaks from the conventional, and it’s rather amusing to watch as Eugene and crew attempt to employ long-held beliefs about how to destroy bloodsuckers, only to have them fail miserably.

Horror-comedy is a delicate balancing act, but Baugh manages to pull it off by toning down some of the comedy to highlight dread and despair, and although a little more context wouldn’t have hurt, there’s still a good time to be had here. Come into BOYS FROM COUNTY HELL anticipating LMFAO content and you may find yourself disappointed, but expect a well-written narrative that delivers a few chuckles where appropriate, an easily relatable cast of characters with fantastic depth, and a story that’ll get you right in the feels, and you’ll be glad for this fresh take on well-trodden territory.

BOYS FROM COUNTY HELL is now streaming exclusively on Shudder.