Movie Review: “Bloodthirsty” Will Sate Your Hunger for Lycanthropes

An artist’s struggle to create can feel like a monster all its own. The inner turmoil, self doubt, and inescapable frustration can create enough trauma to fill volumes. Horror films like The Devil’s Candy and The House That Jack Built show a painter and an architect, respectively, creating art with their own demented twist, but what of the pain it takes to get there? Similarly, BLOODTHIRSTY looks at a young musician as she struggles to record an album, and the dark discoveries she makes about herself as she throws herself into her art.

Grey (Lauren Beatty) has made one excellent album. Few musicians would be satisfied to stop there, but she is struggling to get past the fear of failure over her sophomore effort. In what seems like a Hail Mary attempt to appease her record company and push herself musically, she hires producer, Vaughn (Greg Bryk). He has Grey and her girlfriend Charlie (Katharine King So) come stay at his remote home while the record is completed. Grey is excited and nervous, and Charlie is doing her best to play the part of a supportive partner.

Vaughn’s methods are slightly unusual. Not only is the isolation from society a bit jarring, but pushing Grey to the edge of her wits and stopping recording sessions to go sprint in the snow are questionable practices from a man who is just supposed to be mixing audio tracks. And no number of Charlie’s objections can distract from the fact that the music Grey and Vaughn are making together is good. Really good.

But this artistic isolation can only take them so far away from the real world. Grey has vivid visions of becoming a wolf. Or, at least she thinks they’re just visions. And Vaughn’s personal history of having lost a muse to suicide years previously sneaks into both their lives and alters their dynamic. The deeper they get into the album, the more trapped they are by their personal demons.

BLOODTHIRSTY manages to do what so many singer-focused films cannot: the music is truly wonderful. As we hear the development from a musical phrase, sometimes just a few bars that emerge from the top of Grey’s thoughts, into a fully arranged pop beauty, the evolution from idea to ditty is captured in a way that feels organic and meaningful. Though Vaughn significantly shapes a lot of her songs, the nascent tunes start with Grey. The songs in BLOODTHIRSTY are all written by Lowell, a singer/songwriter who also co-wrote the film with her mother, Wendy Hill-Tout. 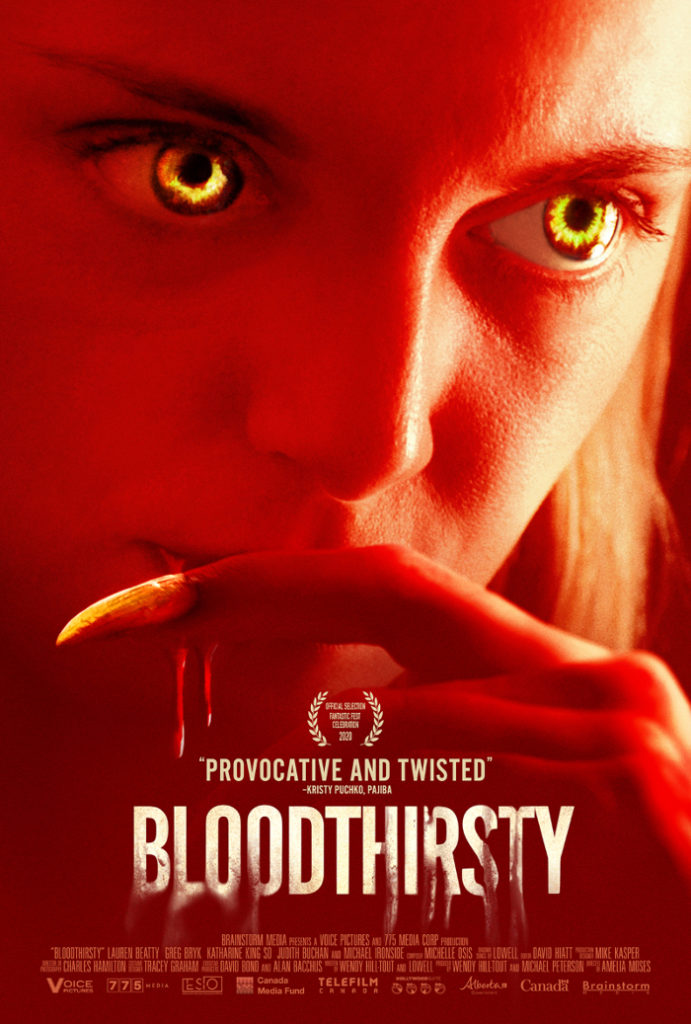 This is the second time in the past year that Beatty has starred in a film directed by Amelia Moses. The duo’s Bleed With Me was similarly isolated and blood soaked, when the time came. They appear to work well together, and Beatty consistently disappears into these roles of women struggling with transformation. While there is ultimately a strong horror payoff near the end of BLOODTHIRSTY, the film toils with the relationship between muse and artist, and has an overabundance of exposition.

There is no doubt that the relationship between Grey and Vaughn is complicated. While she inspires him, ultimately it should be up to her to create and drive her art. BLOODTHIRSTY seems aware of this nuance, though even as it mixes in the complication of her queerness and the potential for shapeshifting, the film never seems to come down in favor of this relationship or against it. An older man takes away certain layers of agency and identity for a young, vulnerable woman, and yet it is presented as if this process is making her into her true self. This doesn’t sit right with the film’s more socially progressive elements.

BLOODTHIRSTY also has a problem with exposition. Its lack of exposition initially comes across as a graceful embrace of ambiguity and trust in the audience, but this self-assured manner is all but shattered when, at the height of the horror, the plot hits the brakes and instead subjects us to a thorough, verbal explanation about what has happened and what will happen. Not every exposition scene is as abrupt or unnecessary, but up to this point, BLOODTHIRSTY has such a good thing going, it should have kept it up.This is not to say BLOODTHIRSTY is heavily flawed or to be avoided. These dings are mere chinks in the armour of an overwhelmingly poetic and disturbing film about an artist’s struggle with identity amidst creation. The music is incredible and Beatty’s performance is deserving of laurels.

BLOODTHIRSTY is now available to stream from Brainstorm Media.