Movie Review: “BARBARIAN” is full of shocking surprises (which we won’t give away)

The end credits of BARBARIAN include a thank-you to Jordan Peele. I don’t know whether Peele contributed in any significant way to this film, or whether writer/director Zach Cregger, previously best known as one of The Whitest Kids U’ Know troupe, is simply acknowledging Peele as a trailblazer in proving that someone celebrated for sketch comedy could very successfully transition to the feature horror world. In any case, BARBARIAN definitively proves about Cregger what GET OUT did about Peele: that he’s a born genre filmmaker.

BARBARIAN doesn’t aim for the sociopolitical resonance of Peele’s work, though it does have a “Nope” moment and the basic premise confronts a POC lead with threatening white people. Actually, make that potentially threatening for most of the lengthy first act, which proceeds from a surefire modern scary-movie premise. Tess (Georgina Campbell) arrives late one night to an Airbnb on the outskirts of Detroit, only to find the key isn’t there and the owner isn’t reachable by phone. Then it turns out someone has already checked in: Keith, who arouses audience unease right away since he’s played by Bill Skarsgård, who so indelibly enacted Pennywise in the IT duo. Tess is understandably reticent to share the house with a guy she doesn’t know, but the night is rainy, the neighborhood seems sketchy, there are no open hotels nearby and Keith does his best to assure that it’s the safest option. 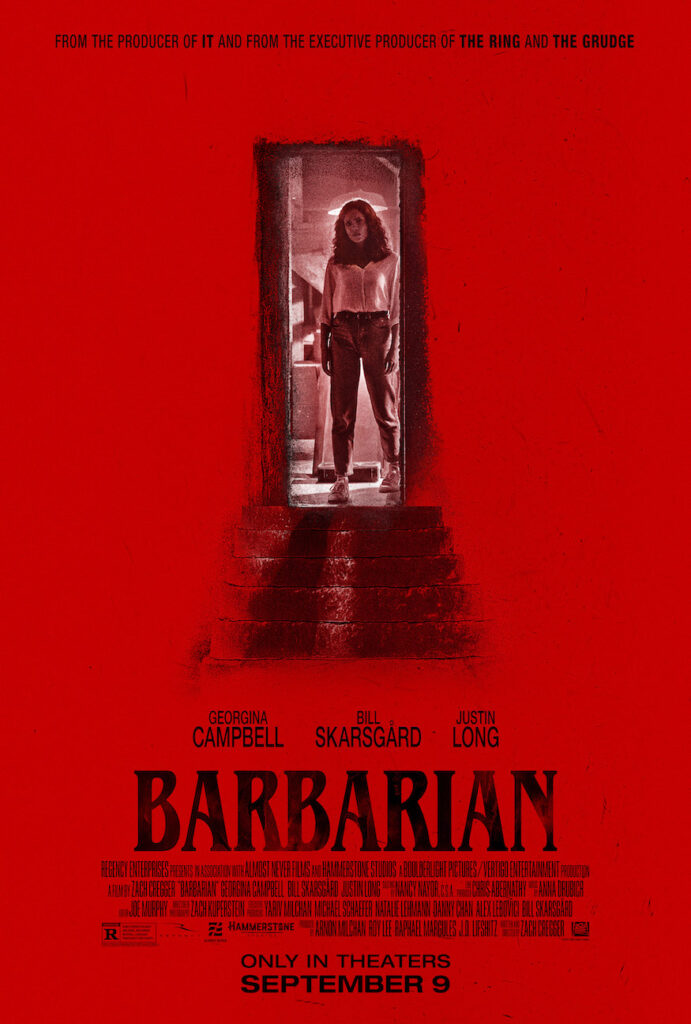 Throughout this portion of BARBARIAN, Cregger and his two leads perform a dance of suspicion that genuinely keeps you guessing about Keith’s intentions, what he’s really doing there and whether Tess should trust him. Campbell and Skarsgård play off each other expertly, and Tess acts pretty reasonably under the circumstances, even as the audience (which, unlike Tess, knows she’s in a horror film) suspects that getting the hell out of there and going anyplace else might be the best course of action. At the same time, Keith comes to seem like he might be not only a decent guy, but someone Tess can relate to. That’s important to keep us on Tess’ side when Keith later goes missing, and Tess, while searching for him, discovers a part of the house she shouldn’t…

And all that stuff is in the trailer, so any description of BARBARIAN’s plot will stop here. There’s a whole lot more to the movie that that preview doesn’t even touch on, and part of Cregger’s achievement with BARBARIAN is that he’s able to make a couple of major storytelling pivots that nonetheless tie seamlessly into the narrative he’s established from the beginning. Suffice to say that there’s a lot more to that house, its owners and its history than first meet the eye, and while exploring all of them, Cregger and co. venture into some seriously perverse and gruesome areas. The first half of BARBARIAN expertly cranks up the tension in psychological and atmospheric ways, all so that the second can hit us with all manner of bizarre and twisted sights that range from nervously amusing to genuinely horrifying.

From minute one, Cregger demonstrates that he knows exactly what he’s doing, and an ability to perfectly vary and adapt his filmmaking approach to the tone and time he’s presenting. He even makes story turns that might at first seem counterproductive work for him, as when [MILD SPOILER ALERT] Tess makes it through the first night in the house, and steps out of it into the daylight–only for the cold light of morning to reveal just how bad a neighborhood she’s stuck in. Like the Detroit-set DON’T BREATHE, BARBARIAN was shot in Eastern Europe (in this case Bulgaria), with a seamless mix of that lensing and a couple of days’ filming in the actual Motor City to present a suburban hellscape no one would ever want to visit.

Kudos for that, and the success of BARBARIAN in general, also go to the superb craft team, including DP Zach Kuperstein (THE EYES OF MY MOTHER, THE VIGIL), who submerges us in ever-creepier layers of darkness; production designer Rossitsa Bakeva, whose work inexorably proceeds from the normal and comfortable to the decrepit and squeam-inducing; and Anna Drubich, composer of the score that does a lot to keep the viewer on edge. BARBARIAN is a true horror sleeper, one best seen with a large audience guaranteed to enthusiastically respond to its go-for-broke creativity and no-holds-barred grotesquerie.