Xander Perkins (Chris Kozlowski) is a hard-drinking, down on his luck witch with no future and no direction until he takes a nerdy, high school loser under his wing in BAD WITCH. If that storyline seems vaguely familiar, it should. BAD WITCH is essentially a scattershot attempt to squeeze the plot of Terry Zwigoff’s hit 2003 black comedy Bad Santa into an ill-fitting Halloween costume.

In the film’s opening, young Xander (Clark Furlong) discovers the burned skeletal remains of a man tied to a chair in his father’s garage. Along with the corpse, he finds handwritten notes containing mysterious symbols, drawings of demons, and revenge spells. The film then flashes forward to the present where an adult Xander, having apparently followed in his father’s footsteps, uses the dark arts to sleep with women, get high, and exact petty revenge. Forced to reevaluate his life when a victim of one of his spells has him beaten within an inch of his life, Xander decides to lay low with his best friend Henry (James Hennigan). Henry, who’s known Xander since high school, allows him to stay on the condition that he stops practicing black magic. In an underdeveloped plot point, we learn that witches who abstain from spellcasting suffer painful withdrawals that result in their bodies decaying and deteriorating.

In a bid to leave black magic behind him, Xander gets hired as a dishwasher at a local diner where he meets waiter Roland Grimm (Jackson Trent).  Roland, a stereotypical nerd, is the target of relentless bullying by football hero Conrad (Jonathan Helwig) and his fashion-forward henchman Hans (Abe Kim). Sympathetic to his plight, Xander befriends Roland and teaches him the ways of witchcraft to help get back at his tormentors and win the heart of his crush, Veronica (Clare Lefebure). Yet, just as all seems to be finally working out for the magical duo, Xander and Roland face the terrifying consequences of dabbling in the supernatural. 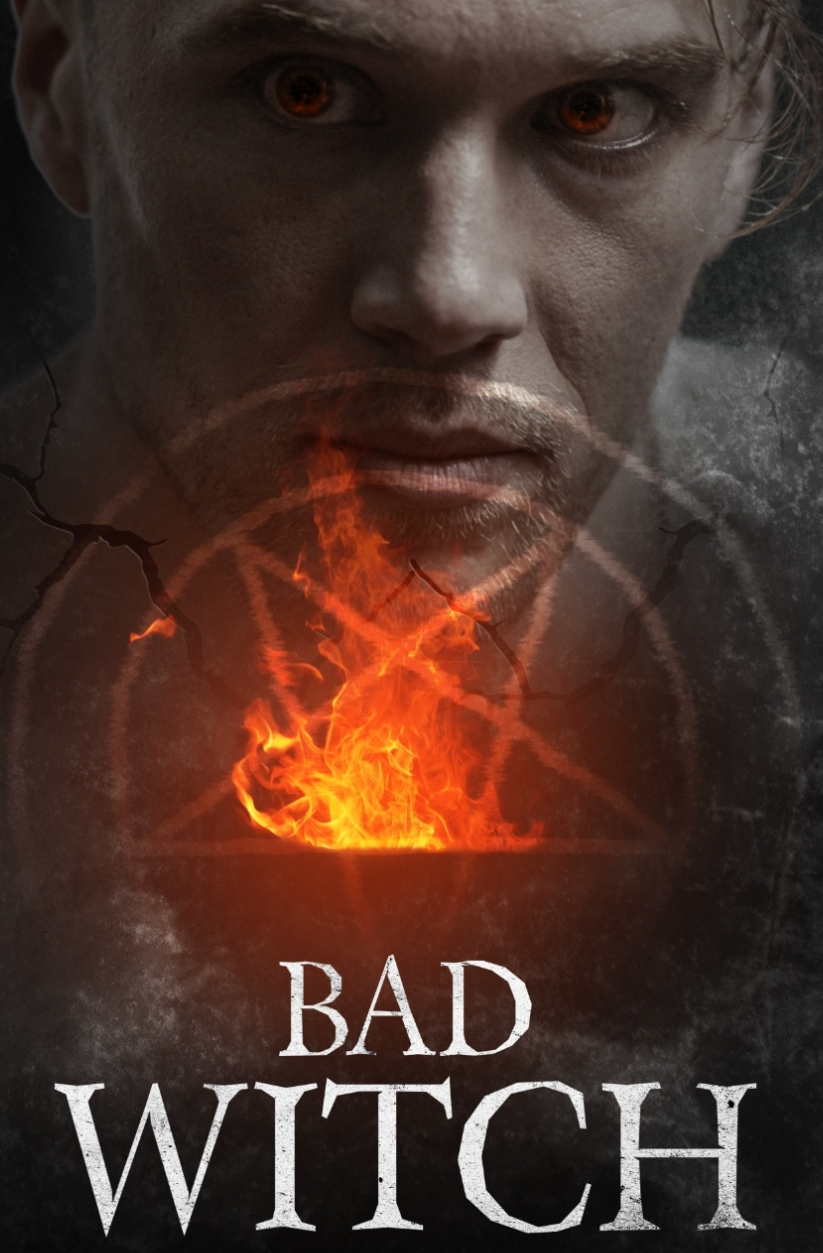 As a low-budget horror movie, BAD WITCH suffers from all the common flaws associated with the genre. The performances are unseasoned and occasionally stilted and stagey. However, the cast’s chemistry and commitment to delivering such inanities as, “You’re right. I think I have to give up black magic” straightfaced keep the movie engaging. From a technical perspective, the camera work, editing, and sound are all very good, making BAD WITCH a surprisingly polished film. However, the special makeup effects are inconsistent with scenes of gore that are alternately effective and laughable. Art direction is virtually nonexistent. In a bewildering example of the film’s lack of imagination, Xander’s various grimoires, emblazed with such titles as “Spells” and “Magic,” appear to be taken directly from the New Age shelf at Barnes and Noble.

Clocking in at just over an hour and twenty minutes, BAD WITCH somehow still feels padded. Directors Land and Fink linger on scenes that do little to advance the plot while glossing over key moments that are essential to establishing exposition and fleshing out some of the more interesting elements of the film’s witchcraft mythology. At any rate, a bit of character building would have been much more enjoyable than sitting through the cringe-worthy training montage that features Xander and Roland cheerfully whacking each other with pool noodles while wearing dimestore witch hats.

BAD WITCH’s main flaw, however, is its identity crisis. Tonally, it vacillates from deadly grim to light and goofy and back again with little internal logic. The film’s middle act at times feels like it could have conceivably been produced for a younger teen audience, while the end, which I will not spoil here, takes the film into surprisingly dark territory. Although it is jarring, it’s not effective – largely because the filmmakers have invested so little in their characters and their relationships. Overall, BAD WITCH fails as both horror and comedy. Sadly, it also lacks the so-bad-it’s-good charm that makes so many B-movies enjoyable.

BAD WITCH is available On Demand on April 27th from Gravitas Ventures.