This review should come with an asterisk. I watched FALL on a home screener, and there’s little doubt that its vertiginous impact would have been even stronger if seen on a theatrical big screen. As it was, FALL still gave me some of the strongest fear-of-heights shakes I’ve gotten from a film since I saw the tightrope-walker drama THE WALK in IMAX. (Though FALL shot with those large-format cameras, it doesn’t appear to have been released in IMAX, and one can only imagine the effect it would have there.)

There are some bumps in the road on the way to the thrills, in the form of clunky, on-the-nose dialogue and dramatics following a prologue that finds Becky (Grace Caroline Currey), her husband Dan (Mason Gooding) and best friend Hunter (HALLOWEEN 2018’s Virginia Gardner) climbing a sheer cliff face. Given the movie we’re watching, we know what’s coming, and it will surprise no viewer when Dan takes a fatal plunge. “51 weeks later,” Becky has a severe drinking problem and an unopened box containing Dan’s ashes. Her father (an underused Jeffrey Dean Morgan) has been trying to break her out of her funk, but it takes a visit from Hunter to effectively light a fire under Becky. “If you don’t confront your fears, you’re always going to be afraid,” says Hunter, who proposes that Becky do so by joining her to scale the B67 TV Tower in the California desert. 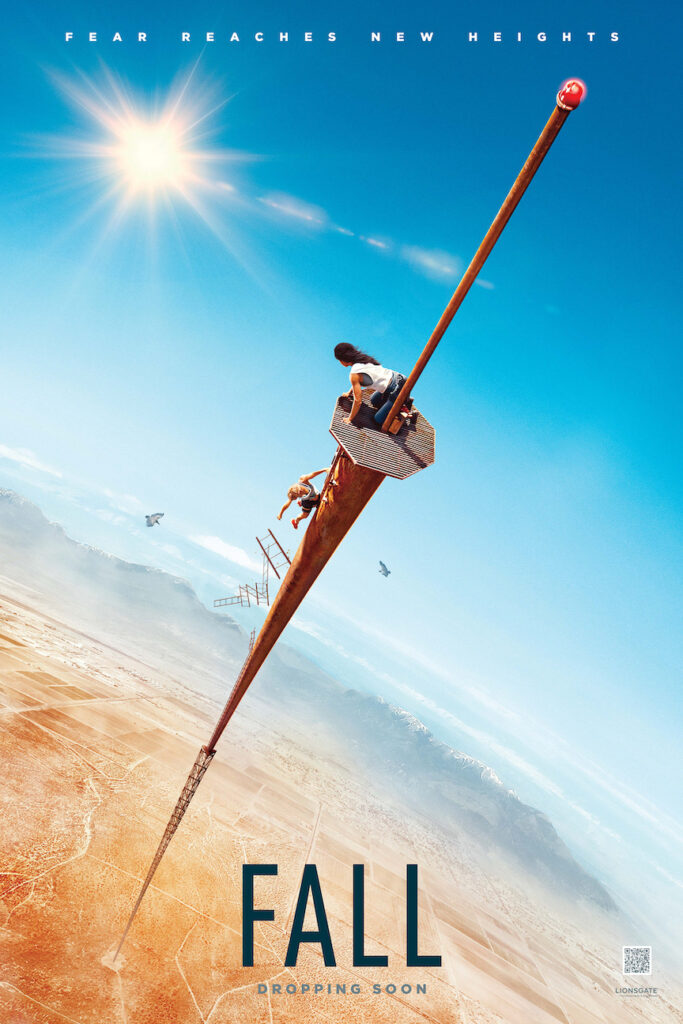 It’s quite the imposing structure, rising more than 2,000 feet above the sand; the press notes suggest it really exists, though it actually seems to be based on a trio of transmission towers in the Walnut Grove, CA area. Becky has understandable doubts, but Hunter, who vlogs as “Danger Dee” on YouTube, convinces her to head past the “No Trespassing – Danger of Death” sign and ascend the ladder that runs almost up to the top. This is where director Scott Mann, who scripted with Jonathan Frank, gets the heebie-jeebies going, with the creaking metal, vibrating ladder and straining support cables hinting that this will be one ill-fated venture. Sure enough, after they successfully make it to the uppermost platform and capture some celebratory video footage, part of the ladder gives way in one of several breath-stopping scenes, and leaves Becky and Hunter stranded with no way down.

From the moment the duo begin to leave the ground far behind, the illusion that they’re really hundreds, then a couple of thousand feet in the air is complete. It’s hard to tell how much of FALL was shot on heightened locations and how much was digitally assisted, and when the movie is at its best, it ceases to matter. Mann and his actresses, who both feel emotionally and physically present throughout, successfully sell the illusion that Becky and Hunter really are stuck up there–at twice the height of the Eiffel Tower, one of them points out. And you don’t have to be acrophobic to get seriously worried that one or both of them are going to slip and plunge to their deaths, even before their situation becomes perilous. I have to admit to having a couple of “It’s only a movie” moments while watching FALL, reminding myself that no one involved actually dropped to their deaths.

It’s just a shame that there are numerous moments throughout the runtime that also remind you it’s just a movie. A couple of setups for future developments are pretty blatant, and the melodrama gets laid on thick on a few occasions, particularly when it comes to an inevitable revelation intended to engender extra drama between the two friends. And there’s one major story turn in the final going that will give those familiar with a somewhat similar thriller from several years back a serious case of déjà vu–which became especially egregious for this viewer when it turned out that film and this one share a couple of producers.

On the other hand, there is one really neat, grisly and well-motivated gag during the climactic action that pushes the limits of the PG-13 rating (and fortunately didn’t have to be altered like the movie’s dialogue profanities). In general, though, FALL is less dependent on blood and injuries for its effect than it is on the simple, relatable fear expressed in its title, which the film successfully exploits to the hilt even when the scriptwriting drops the ball.