Movie Review: “ARMY OF THE DEAD” doesn’t do its premise justice

Here’s one Zack Snyder cut that definitely needs to be shorter. ARMY OF THE DEAD takes two and a half hours to tell about 60 or 70 minutes of story, which wouldn’t be as great an issue if so much of it wasn’t familiar from other movies of its ilk.

This is a particular disappointment given that Snyder achieved what at the time seemed impossible and turned the DAWN OF THE DEAD remake, his feature debut, into an honorable film–not the sociopolitically shocking masterpiece George A. Romero’s original was, but a lean and mean zombie thriller sprinkled with clever, personal touches nonetheless. In a sense, Snyder had a more Herculean task with ARMY than he did with DAWN, having to follow up not one masterful ghoul saga but the whole flood of undead films big and small that his own reboot helped to launch. ARMY has been in the works since back when Snyder made WATCHMEN, and it has finally emerged as too little, too late. 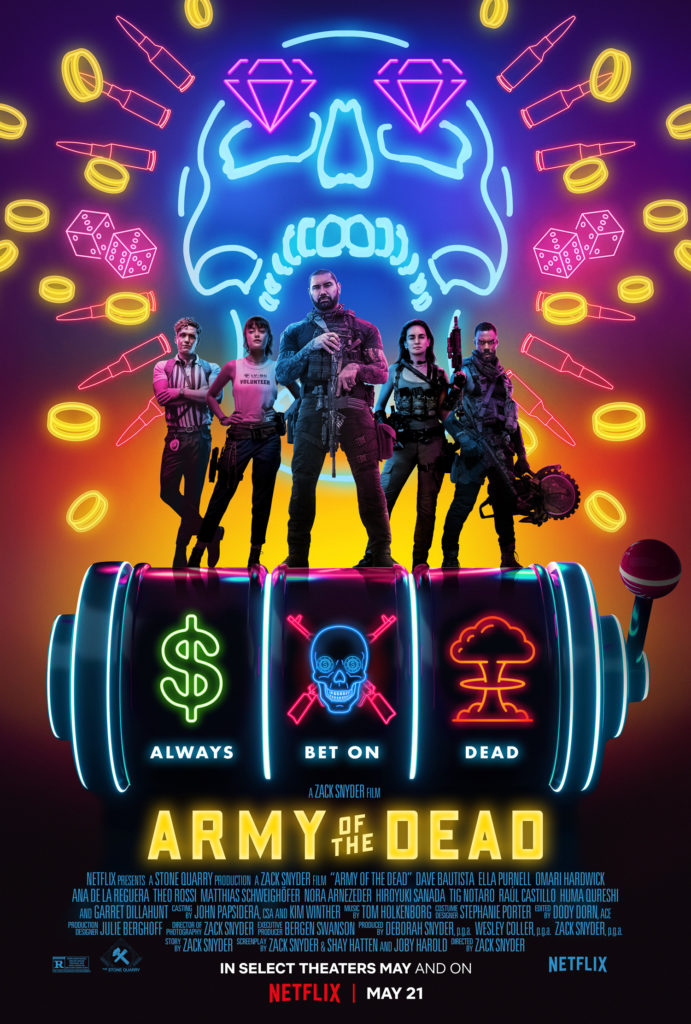 That may seem a strange thing to say about a movie as determinedly big and brazen as ARMY OF THE DEAD, and you certainly can’t say Snyder held back on the spectacle. After so many megamovies getting release-bumped during the pandemic, Netflix has made the shrewd choice (evidently emboldened by the box-office success of GODZILLA VS. KONG) to put ARMY in theaters today ahead of its streaming premiere next Friday, and moviegoers itching for some big dumb thrills on the big screen may find the film to their satisfaction. After a military-convoy highway accident unleashes a few slavering flesheaters into the Nevada desert, a highlight is the main title sequence, depicting the fall of Las Vegas to zombified Elvis impersonators, topless showgirls and the like. There’s a gleefully berserk energy and imagination going on here (I especially dug a quick visual beat involving a parachute), though if you can guess that the action is backed by a cover of “Viva Las Vegas,” you’re right on the movie’s on-the-nose wavelength when it comes to song choices, which also include new versions of “Bad Moon Rising” and “The End.” Perhaps the GUARDIAN OF THE GALAXY films’ James Gunn, who scripted Snyder’s DAWN, should have been called on for playlist consulting.

He might have taken a whack at the screenplay too. After that promising opening, ARMY settles into its primary plotline, taking quite some time to introduce a slew of characters yet filling in very few of them with more than the most basic colors. Our hero is Scott Ward (Dave Bautista), who once saved the Secretary of Defense from becoming ghoul chow but has been flipping burgers since a traumatic event (having to brain-stab his zombified wife) estranged him from his daughter Kate (Ella Purnell). He’s approached by casino owner Bly Tanaka (Hiroyuki Sanada) with an offer he can’t refuse: Lead a team into Vegas, now a walled-off no-living-man’s-land, and retrieve $200 million from a vault, and he and any of his partners who survive can split a quarter of that.

The squad comes to include Scott’s former fellow soldiers Vanderohe (Omari Hardwick) and Cruz (Ana de la Reguera); expert safecracker Dieter (Matthias Schweighöfer); Mikey Guzman (Raúl Castillo), an Internet zombie-killing celebrity; cynical helicopter pilot Peters (Tig Notaro); and Tanaka’s representative Martin (Garret Dillahunt). Peters says, “I hate my life so deeply; if I had $2 million, my life would change drastically,” and Martin says, “I’ll also be accompanying you on this job because of my extensive knowledge of the casino,” and a lot of the dialogue is just that obvious and functional. Before making the trek into Vegas, they stop at a quarantine camp where the movie makes a few welcome bites at topicality, and they pick up Lilly (Nora Arnezeder), a “coyote” who knows her way around the city but whose previous missions have had an unpromising survival rate, and Kate, who’s got personal reasons for allying herself with the father she still resents.

Just as they’re heading in, one character makes what seems to be a stupidly ill-informed decision, albeit one that pays off later in a scene creepy enough to make one wish the setup had been better handled. This setpiece introduces the concept of “alphas,” advanced zombies that, while they can’t talk, have established something of a society ruled by the fearsome Zeus (Richard Centrone). This is one of a few intriguing concepts ARMY introduces but doesn’t flesh out enough (though I did enjoy Zeus riding into battle on a zombie horse), instead settling for routine action/horror/heist beats and sequences. A few are borrowed from ALIENS in particular, right down to Lilly’s line “You don’t see them fucking each other over,” and another pulls a hi-tech variation on RAIDERS OF THE LOST ARK. (ARMY also has a character discuss RAIDERS in the opening scene, making the too-common mistake of explicitly reminding viewers of a better movie than the one they’re watching.)

One thing you can say is that Snyder and co. do more with the possibilities of a zombie-infested Las Vegas than RESIDENT EVIL: EXTINCTION (which, to be sure, did nothing with them at all). There are moments when ARMY OF THE DEAD pays off on the idea of setting a blasting-and-bloodshed apocalypse in the midst of a city defined by its excesses, but we just don’t care enough about the characters or their mission for anything to really stick. Despite the establishment of a ticking clock (the government is about to nuke Vegas–on the 4th of July, no less), the movie loses pace the closer they get to their goal. Then the clock is suddenly accelerated to heighten the suspense, yet no one acts with any urgency; Scott takes time out to talk about the tofu food truck he dreams of and deals with personal issues, one character throws down his weapon to go mano a mano with a threatening ghoul, while another makes an incredibly dumb choice leading to an especially implausible wrapup.

ARMY OF THE DEAD does get some juice from its cast, particularly Bautista, whose quietly bullheaded charisma makes him a perfect match for this lead role. Hardwick has the right attitude and Notaro has a way with a wry line reading, and they add a bit of spark to their scenes. Again, though, you can’t help but think back to ALIENS, how individualistic those Marines were, and how each of their deaths meant something; here, once there are just a few of Scott’s gang left standing, I was hard pressed to recall how all of the others died. On its own terms, ARMY OF THE DEAD is sporadically diverting, with one scene close to the end that’s so audaciously silly you have to admire it, but the movie only occasionally clears the over-the-top high bar it sets for itself.