Movie Review: Answer the frightening call of “THE BLACK PHONE”

By this point, it’s probably unfair to talk about Joe Hill’s narrative inventions in terms of comparison to his dad Stephen King, but the opening act of THE BLACK PHONE, based on Hill’s short story, carries unavoidable echoes of the older author’s work. It’s a kids-oriented period piece (set in 1978 “North Denver”) in which the central youngsters deal with bullies, an abusive parent and burgeoning psychic abilities that appear to be hereditary.

If the similarities are going to be called out, this should immediately be followed by noting how well these tropes have been handled by BLACK PHONE writer/director Scott Derrickson and his regular co-scripter C. Robert Cargill. Those central elements have been done to death in countless past films both in and outside the horror genre, but the filmmakers avoid clichéd and simplistic presentations, and young siblings Finney and Gwen Shaw (Mason Thames and Madeleine McGraw) as well as the people around them feel earthy and real. Compounding that veracity are the terrific performances by Thames and McGraw, who bring great personality to their roles and quickly establish a palpable sibling bond. These two put-upon youths and the drama of their lives grip your attention even before THE BLACK PHONE gets to the scary meat of its story. 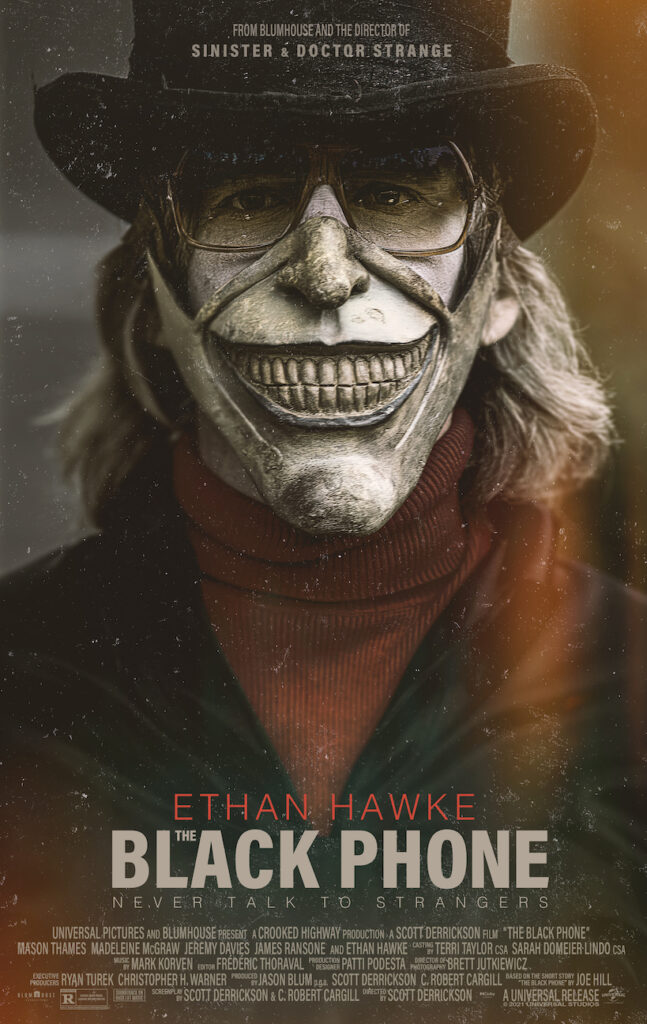 Hovering over all the other travails of Finney and Gwen’s lives is the specter of The Grabber, the name given to the unseen someone responsible for the vanishings of multiple local boys Finney’s age. One of the abductions has a direct impact on Finney’s school situation before he himself is taken by the Grabber (Ethan Hawke), who uses a magician’s garb and van as cover for his activities making children disappear. Finney wakes up imprisoned in a grubby basement where the Grabber makes occasional appearances to either taunt or falsely ingratiate himself to the boy, with Hawke enacting a truly skin-crawling fiend from behind a collection of unnerving masks created by Tom Savini and Jason Baker.

THE BLACK PHONE is a return by Derrickson and Cargill to SINISTER territory: suburbia with dark secrets dwelling here in the cellar instead of in the attic, and Hawke doing a 180 from his sympathetic protagonist in that previous film. If PHONE doesn’t sustain the same consistent and powerful chill as SINISTER, that’s because its aims are a little different. It’s more a thoroughly gripping dark drama than an outright scarefest, an examination of Finney finding his inner strength under threatening and apparently hopeless circumstances, while Gwen valiantly attempts to help find him. She’s guided by dreams that appear to be dropping clues to his whereabouts; meanwhile, the titular device on the wall of Finney’s “cell” allows for eerie communications that might help him outwit and escape from his captor.

The intrusions of the supernatural are handled with a matter-of-fact approach that integrates them gracefully into the very well-grounded reality of THE BLACK PHONE. They result in a few jolting moments, eerie visuals and sustained suspense sequences, some of the tension arising from the fact that the adults around Gwen (reasonably) don’t believe that her nightmares might hold the key to solving the mystery that has devastated their neighborhood. Gwen has a mouth on her when dealing with the authorities (and praying to Jesus!), but her well-timed profanities seem true to her character, rather than being used for cheap swearing-kid humor or shock value. And in general, the movie handles its overall theme of violence threatened against and inflicted upon children in a direct, unexploitative and impactful manner.

All the creative hands are in top form, among them Brett Jutkiewicz (the rising-star genre DP with credits including SCREAM, READY OR NOT and STRANGER THINGS), who contributes atmosphere so gritty you can feel it, and Mark Korven (also a horror regular with THE WITCH, THE LIGHTHOUSE and CHAPELWAITE on his résumé), composer of the nerve-jangling score. Jeremy Davies, like those surrounding him, dodges conventionality and brings honest feeling to Finney and Gwen’s often angry, deeply troubled dad, while only a character played by SINISTER’s James Ransone feels somewhat contrived. To its final scene, though, THE BLACK PHONE gives you the feeling of looking into real lives being disrupted by evil lurking in their own backyard–which, as creatives from King to Hill and further on down know, can be the scariest kind.