Movie Review: A film with both frightening and emotional “POWER”

THE POWER going off is what engenders some of the tension in the British chiller that just debuted on Shudder, and an ever-present power of a different kind that doesn’t go away results in more of it. Writer/director Corinna Faith has found just the right historical setting to tell a horror story that merges classical haunting tropes with very up-to-date ideas.

The opening minutes carry echoes of another recent female-led UK genre outing, SAINT MAUD, as we’re introduced to Val (Brit TV regular Rose Williams), a devout young woman with a dedication to helping others. From there, THE POWER quickly goes down its own path, which takes Val, an orphan who grew up in a Catholic girls’ home, to a job at the nearby East London Royal Infirmary. It’s early 1974, and the country is in the midst of a government/trade war that has led to imposed, energy-conserving blackouts, plunging the citizens into darkness on selected nights. Val finds it hard to deal with this in her own apartment, much less in the vast, imposing Infirmary, where the matron (Diveen Henry) overseeing her lays down the strict rules of conduct designed to keep her in her place. Val does find friendly support from Dr. Franklyn (Charlie Carrick), but that’s not going to be much help when she is ordered to pull an overnight shift–one during which the lights will be going out. 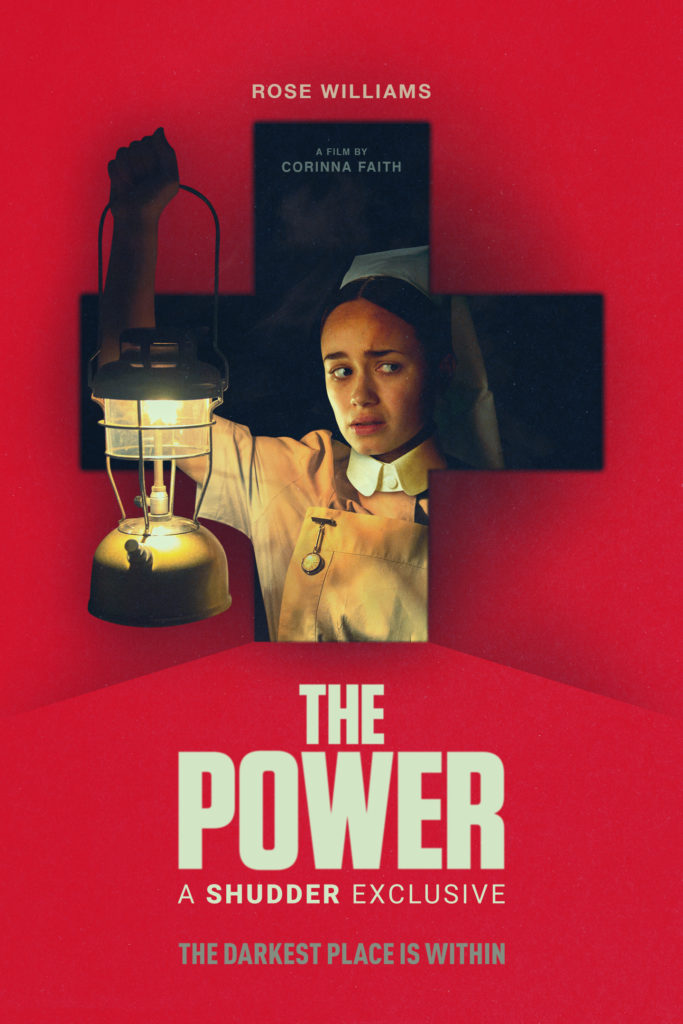 Right from the start, Faith bestows the Infirmary with an enveloping sense of place and procedure that suggests a professional’s familiarity with such a facility. Supervising sound editor Joakim Sundström contributes an audioscape rife with sounds of distant activity echoing in the background, putting us right alongside Val in this unfamiliar, overwhelming environment. The sounds become even more unsettling when Val goes to the intensive care unit she’s been assigned to–rather than the pediatric ward she had hoped for–and the aural ambience becomes one of tortured breathing. Val’s professional plight is so involving, you almost forget you’re watching a horror film for the first half hour or so of THE POWER, a couple of moments in which she thinks she’s being watched from beyond empty doorways notwithstanding. Faith and cinematographer Laura Bellingham elicit plenty of unease and menace from their location even before the lights sequentially and inexorably shut down (“Too early!” Val protests) and the place is plunged into a gloom–pierced only by minimal light from lanterns and headlamps–where it’s easy to believe unfriendly spirits might be hiding.

Val certainly believes they are, particularly when an unseen force seems to attack her in the dark. The other nurses working the late shift don’t believe her, though, and there are hints dropped during the movie’s first half about a past event that also suggests Val is unreliable when it comes to reporting trauma. The unforced but clear subtext throughout the film is of women who are doubted, including by other women, when it comes to their claims of assault, and certainly, the Infirmary is shown to be a place where men have the power. All the doctors are male, that martinet of a matron is herself under their sway and the only guy on the dark shift is Neville (Theo Barklem-Biggs), a sleazy security guard who subjugates his girlfriend Babs (Emma Rigby)–a former classmate of Val’s who in turn acts spitefully toward her. Levels of power are what THE POWER is about under the surface while the supernatural elements come slowly to the fore, victimizing the already tormented Val.

As the presence lurking within the Infirmary overtakes Val, Williams’ deeply felt performance becomes a physically impressive one as well, her body twisting and contorting in painful-to-watch scenes. Yet Val’s “relationship” with the ghost haunting the hospital goes to unexpected places as THE POWER reaches its climax, and its occult and sociopolitical themes become merged. The rest of the cast is fine as well, particularly Shakira Rahman as Saba, a young girl left behind when the rest of the hospital’s kids are evacuated in anticipation of the blackout. Saba’s English is limited, yet it is she who is able to convey to Val the nature of the presence inhabiting the Infirmary.

With this, her second feature, Faith demonstrates an unerring sense of composition and staging to create maximum mood, which is visually rooted in realism with the occasional flourish (like a generator room, lit by flashing red lights, that resembles something out of a spaceship). The music by Gazelle Twin and Max de Wardener combines the electronic and ethereal to eerie effect for a while, before it goes full-bore SUSPIRIA discordant and shrieky in the later going. THE POWER largely eschews going over the top, though, remaining throughout an unsettling mix of the paranormal and the personal.