Ambiguity and family trauma seep throughout the tense fabric of Ruth Paxton’s A BANQUET, and while it ultimately leaves a bit to be desired, the overall experience is one of haunting unpredictability.

Like so many great horror films, A BANQUET starts with a death. Similar to both Midsommar and The Lodge, this death is simultaneously violent and the symptom of a greater, more perpetual horror. Once the scene settles, the thought sets in that not only will the act itself have a lasting effect, but the lives leading up to it are far from healed. Dual-level horror is a helluva way to start a film, eh?

Sienna Guillory stars as Holly, the now lone parent to Betsy and Isabelle (Jessica Alexander and Ruby Stokes). Isabelle is an emotionally detached tween who seems interested only in her ice skating and keeping to herself. That’s all well and good, because this is not Isabelle’s story.

Betsy might look like a typical teenager, and in some ways she is. The pairing of her intentionally smudged eyeliner and aimless life plan seem to put her into that mold, but unlike the typical high-schooler, Betsy gets along with her mother. We do not get to see what their relationship looked like before the father’s death, but their relationship after is affectionate, trusting, and respectful. The mother-daughter dynamic is nearly utopian, until one night when Betsy goes off to a party. 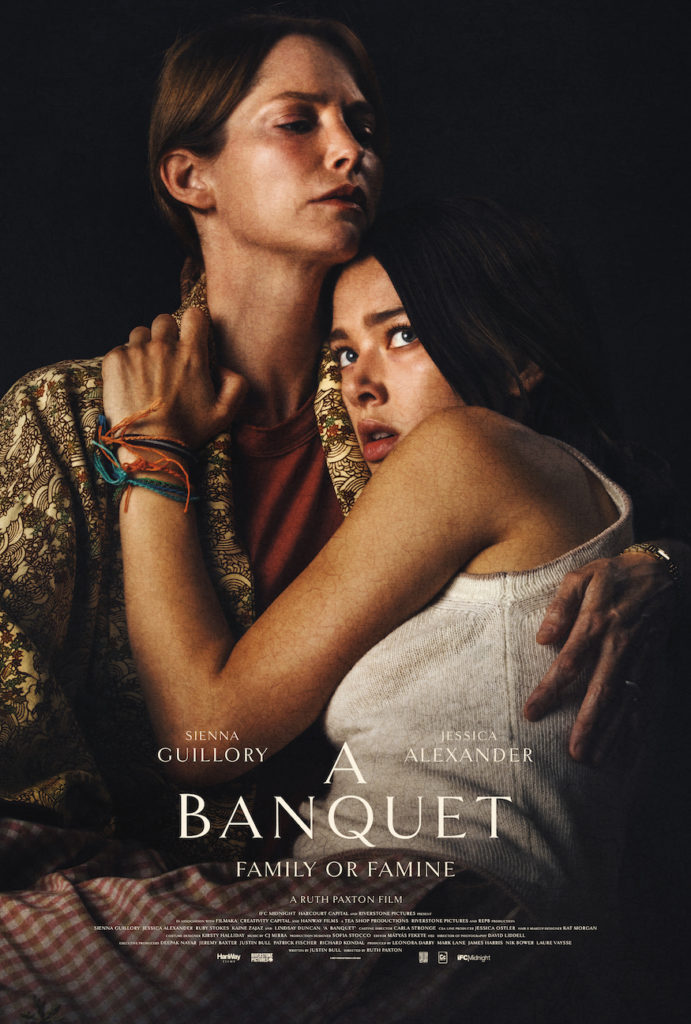 Now, Holly knows where Betsy’s going, and there is no sneaking around at all. But after a stupid but harmless prank from her boyfriend Dominic (Kaine Zajaz), Betsy steps out into the yard and is magnetically drawn to the forest. It is unclear how long she is there, but the blood red moon that night is an unsubtle signal that something very unusual is about to happen. Dominic calls Holly to pick Betsy after she re-emerges from the woods, staggering and collapsing as if she was drunk.

From here on out, A BANQUET piles mysterious symptoms onto Betsy, and with that, suspicion of the potentially fictitious nature of these symptoms. Primarily her complete disinterest and disgust at any and all food. She will sit at the family dinner table to appease mom, but refuses to eat even the teeniest morsel of sustenance. Watching others eat does not need revolting; however, even the thought of eating herself gets Betsy retching.

Those with misophonia should stay far away from A BANQUET, as the visual and aural mechanics of eating are on prominent display here. Holly is quite the cook, at first, and we can track her mental state through her attention to meals. The visuals are lush and the sounds goopy, but these sensory experiences are generally contained to mealtime. The rest of the film is rather bleak and flat. Perhaps that is intentional as a contrast to these succulent feasts. Or perhaps that is a product of the architectural formality of their house. Either way, it does serve to keep us distanced from Betsy and Holly when their relationship takes a turn for the worse.

We have an investment in how Holly and Betsy weather the storm of whatever Betsy is going through, but neither of them let the audience in or show their real fears. It is clear that they are putting on airs for Isabelle and doctors, but without letting us see them, it is tough to fully devote yourself to the emotional journey.

The moments of the most emotional honesty come during two brief visits with Grandma June (Lindsay Duncan). Her history with Holly is not in the past, but June is the one person in all of A BANQUET who sees what is really happening in this family. She is harsh, but when she tells her stories–and she is always telling a story–it is impossible to take your eyes off her.

Ambiguity in the source of terror and emotional dysfunction absolutely has a place in the halls of horror. A BANQUET certainly has both of those, but the occasional missed landing between the two are marked hiccups in the film.