For many, the word “Satanism” conjures up images worthy of a classic Hammer horror movie: black magic, blood sacrifice and candlelit chambers where unspeakable terrors are visited upon young virgins. For others, Satanism is defined by the Satanic panic of the 1980s and 1990s, an unfortunate era when everything from heavy metal and roleplaying games to Saturday morning cartoons were targeted by the Christain right as dangerous, corrupting influences on children. Concurrent with the hysteria, books such as The Satan Seller and Michelle Remembers sold middle America on the false narrative that evil Satanic cults were in every corner of society, committing acts of animal and human sacrifice and, most disturbingly, sexually abusing children in elaborate rituals. While the media lapped up the salacious stories of so-called “Satanic Ritual Abuse,” the lives of innocent people were destroyed as exemplified by the infamous McMartin preschool trial and the heartbreaking case of the West Memphis Three. 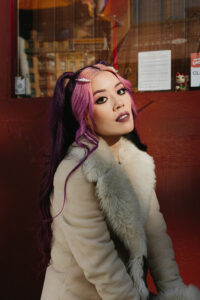 However, Satanism as codified by the late Church of Satan founder Anton LaVey and expanded and redefined by The Satanic Temple is far from the perverse imaginings of evangelicals and much more than the sum of its decidedly dark aesthetics. A fierce brand of often highly theatrical atheism that uses the character of Satan as a symbol of nonconformity and rebellion against the herd mentality of the status quo, modern Satanism is nothing to be feared. It’s also (proudly) not for everyone.

For decades, Satanists, both publicly and in their private lives, have been forced to define their religion/philosophy in terms of what it is not. That’s where award-winning alternative culture journalist, author and TV host La Carmina and her new book THE LITTLE BOOK OF SATANISM come in. A graduate of Columbia University and Yale Law School whose expertise in subjects ranging from travel and fashion to the culinary arts has led her to appearances on such popular television shows as Bizarre Foods, NBC’s Better Late Than Never and The Today Show, Vancouver-born La Carmina has written a layperson’s guide to Satanism, its history and its continuing evolution. A surprisingly user-friendly guide to a notoriously misunderstood topic, THE LITTLE BOOK OF SATANISM may not change many minds in the mainstream, but it will provide a solid academic foundation for the curious that strips away the polemic grandiosity of LaVey’s Satanic Bible for simple, straightforward language.

Recently, La Carmina took time out of her busy schedule to talk about THE LITTLE BOOK OF SATANISM and her Satanic journey.

What compelled you to write THE LITTLE BOOK OF SATANISM? Who is the audience for the book? Are you in danger of “singing to the choir” in that people with preconceived notions about Satanism (the people most in need of this information) are not likely to pick it up, to begin with?

I’ve long been writing about and participating in Japan’s vibrant Satanic subculture, and sharing my experiences on my La Carmina Blog and social media. The pandemic tanked my usual travel journalism [and] TV projects, so I spent the past few years focusing on freelance writing about Satanism and hosting a web show on The Satanic Temple TV. Due to the influence of mainstream media and theocracy, most people have a skewed perception of Satanism, thinking that it has to do with worshiping an actual devil and engaging in evil endeavors. I hope THE LITTLE BOOK OF SATANISM can help to dispel these widespread misunderstandings and let readers learn about the true origins, values and practices of modern Satanists. I feel a general audience might be interested in picking up the book to learn about Satanism without judgment as they might for a nonfiction guide to a lesser-known religion like Jainism or Zoroastrianism.

How did you pitch the book? Were you surprised that a major publisher took a chance with such potentially controversial subject matter?  In your research for the book, did you discover anything about Satanism or its history that you found shocking? With my previous books, I worked with my literary agent to craft a proposal, and then she shopped it to publishers. This time around, I was actually scouted by Ulysses Press to write THE LITTLE BOOK OF SATANISM. The team researches which topics are of increasing interest to readers, and Satanism was one of them. Since I had already written many magazine articles and blogs about Satanic matters, it was a perfect fit. We discussed ideas and were on the same page, so I signed the contract. I think once readers get to know the actual values and history/culture of Satanism, they’ll realize that this isn’t as controversial a subject as they might have thought. Rather, what’s shocking is the way that those in power have falsely associated marginalized individuals with the Devil, with terrible consequences spanning millennia from the persecuted Knights Templar to the witch trials and the Satanic Panic.

When and how did you develop an interest in Satanism? Did you face a backlash from friends and/or family? Do you have advice for young Satanists who are facing persecution from loved ones or peers?

I’ve been involved in Goth and alternative culture since my teen years and met Satanists through these channels. I was particularly intrigued by the vibrant Satanic community in Japan, where I spent much of my time. My family is from Hong Kong, and they’re staunch atheists, so there wasn’t the same cultural backdrop of negativity and fear about Satanism. Rather, they’d be more concerned if I was associated with a religion that invoked guilt and the supernatural!

It’s a difficult situation if young Satanists are facing backlash from those around them. I’d advise them to make sure they are safe first and foremost (and that might mean not publicly broadcasting one’s Satanism at the moment). There are Satanic communities online as well as web-based congregations and events that they can join for support. If the people around them are open to learning more about Satanism, then perhaps they can suggest films like the Hail Satan? documentary about The Satanic Temple, books by Satanic authors … and perhaps my own accessible guidebook to the religion.

I grew up in the ’70s and ’80s during the height of the so-called Satanic Panic. Did the panic ever really end? What challenges are young Satanists facing that are different than those that earlier generations of Satanists faced? Do you feel it’s “easier” to be a Satanist today?

The Satanic Panic chapter of my book is one of my favorites; It discusses the memoir Michelle Remembers and its now-debunked claims of Satanic Ritual Abuse, the hysteria over heavy metal-loving teenage Satanists, the McMartin Preschool Trial and more. The Satanic Panic certainly did not end in the 1990s. Today, we see these conspiracy theories take on new life with QAnon drops, Pizzagate (falsely linking Democratic politicians to Satanic cabals) and other recent events. As The Satanic Temple co-founder Lucien Greaves stated in his foreword to my book, most people don’t really believe Satanists are sacrificing babies – but they do continue to perceive Satanism as a “fake” religion with deplorable values, which they feel gives them the right to deny members fair and equal access to public forums. It’s never easy to be a Satanist. In these days of collapse, theocratic interests are dominating the U.S. and other countries, as we see with anti-LGBTQ and anti-abortion laws. To paraphrase one of The Satanic Temple’s Tenets, “The struggle for justice is ongoing.” 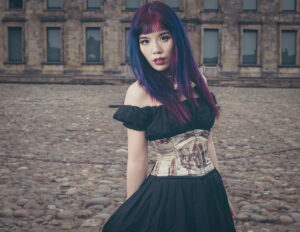 How has Satanism adapted to the 21st century?

The Satanic Temple was established in 2013, ushering in a new movement of “socially engaged” Satanism, particularly in the U.S. Today, a number of Satanists engage in socio-political activism, which can range from community “good works” (such as beach clean-ups and food drives) to lawsuits that uphold religious pluralism and fight theocratic encroachments upon the separation of church and state. The rise of social media has also helped Satanists organize and communicate, and I think Satanism will continue to grow over the next decades.

Do you feel that modern Satanist movements like The Satanic Temple have outgrown Anton LaVey’s influence to some extent? What are your thoughts on the more unsavory aspects of LaVey’s life and character and do groups like the Satanic Temple have a responsibility to address similar issues that have cropped up in its past and leadership?

The foundational basis is quite different, as The Satanic Temple draws upon Romantic Satanism (the early to mid-nineteenth-century literary movement that recharacterized the Devil as a courageous rebel against arbitrary authority), and the novel Revolt of the Angels (how a violent overthrow of God is not the answer, as it only installs a new tyrant). My book goes into detail about these influences, as well as the ideas [and] life story of LaVey and other figures key to the development of modern Satanism (such as Aleister Crowley and The Process Church of the Final Judgment). I leave it up to the reader to come to their own conclusions and encourage them to dive deeper into the academic sources in the bibliography if a certain topic piques their interest.

What are your thoughts on the continuing influence of Ragnar Redbeard’s Might is Right (a text that has become a favorite of white supremacists) and Randian Objectivism on Satanism? Is The Satanic Temple’s move toward political and social activism an attempt to distance Satanism from its occasionally fascistic leanings?

I see a lot less of this influence in Satanism today. Self-identified Satanists span the gamut of political and philosophical leanings. However, they are generally linked by the values of scientific skepticism and rationality, questioning arbitrary norms and oppressive institutions and aiming for one’s fullest self-expression. In this spirit (and inspired by the characterization of Satan in John Milton’s Paradise Lost), TST engages in activism to uphold the rights of marginalized and minority groups.

I just came back from a press trip to Tohoku and Tokyo, Japan. It was wonderful to see my friends and indulge in my favorite foods, as well as visit cute alt stores and enjoy the nightlife. I’m relieved that Japan has finally re-opened to unrestricted tourism, and I want to be back as soon as possible. I’m always sharing updates from my Goth escapades on my social media @LaCarmina and site, lacarmina.com if you’d like to check them out. And THE LITTLE BOOK OF SATANISM comes out October 25, so I’ve been working on the release. [I’m] excited to hear what everyone thinks of it! 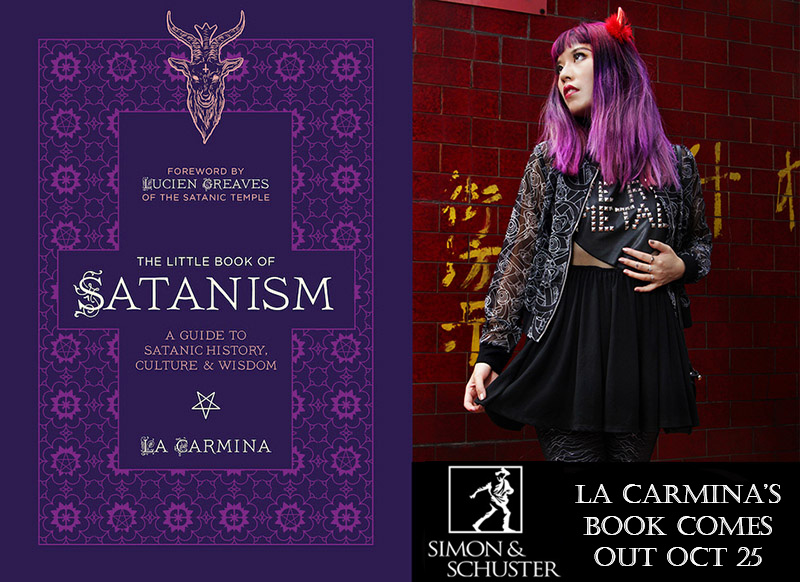 Keep up with La Carmina’s devilish escapades on social media at instagram.com/lacarmina, twitter.com/lacarmina and facebook.com/lacarminaofficial. THE LITTLE BOOK OF SATANISM is available at bookstores and online now.

“I hope THE LITTLE BOOK OF SATANISM can help to dispel these widespread misunderstandings and let readers learn about the true origins, values and practices of modern Satanists.”