INTERVIEW: Filmmaker Zach Cregger on the Terrors of “BARBARIAN”

We are currently living in a renaissance of funny little weird guys making funny little weird horror movies. With Jordan Peele consistently cranking out amazing creepy blockbusters, and with known weirdo Danny McBride being one of the screenwriters behind the two newest Halloween films, it would seem like the ability to inspire a chuckle or tingle a spine are inexplicably interwoven. Enter Zach Cregger, one of the funnymen behind The Whitest Kids ‘U Know, who has now decided to dip his toes in the pool of the spooky with his new film BARBARIAN.

The film follows Tess, played by Georgina Campbell (Black Mirror, Suspicion) who ends up double-booked at an Airbnb only to discover that her new roommate might be the least of her worries. Cregger wrote and directed BARBARIAN as his feature film debut, and RUE MORGUE was lucky enough to dig into his brain about the creative process. 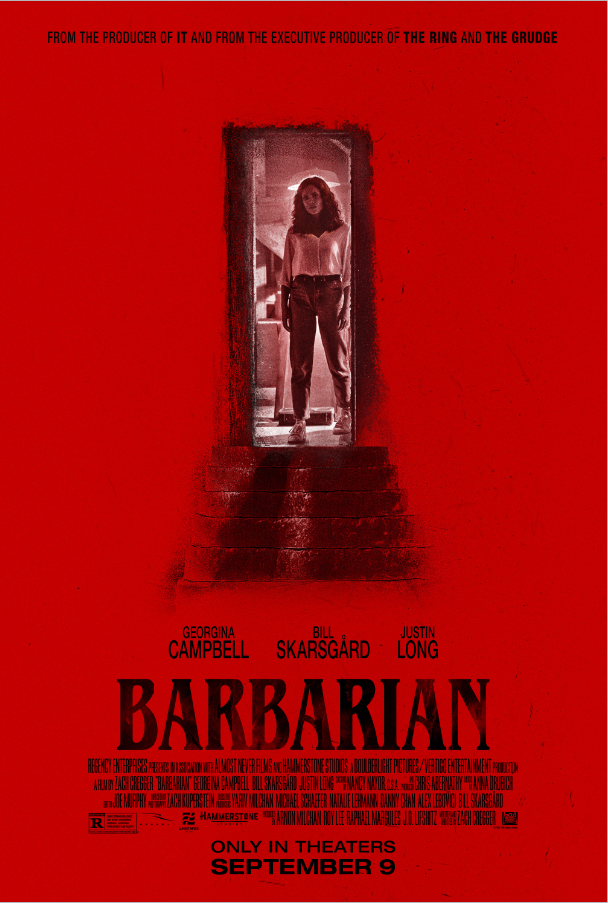 This is your feature film debut and a great one at that. What problems arose while filming that you didn’t anticipate?

Oh, wow. You know, you’re always racing against the clock, so there were definitely some scenes that we really didn’t even get to shoot ‘cuz we ran out of time. This is a very low-budget movie – my movie was like four and a half [million], which is … Look, that’s a lot of money. I’m not going to deny that’s a lot of money, but in today’s movie market, that’s low, We really were having to be scrappy and solving a lot of problems in real-time. Now, as far as other unforeseen problems, there was a scene where – Can we get into spoiler territory here? Is that okay?

So you know where there’s that scene where Justin Long is being force nursed? When he refuses to latch, let’s just say the Mother freaks out and snatches up a rat, she bites the rat in half, pries his mouth open and baby birds him. That was something I was really excited to shoot. We shot it. It looked great. And in the edit, we came to the realization that there’s no way to keep that scene and delay a full up close and personal view of the Mother. You know, you don’t want to see the shark too early in Jaws, right? So I learned in the edit that you’re going to kill some babies, and that was a baby that had to go in the interest of keeping her mysterious. That’s what jumps to mind when I think of problems during production.

It sounds like you learned a lot while filming. What other lessons did you learn that you plan to bring to future projects?

My DP had a really wonderful method of shooting where he and I would go to the set weeks in advance, and we would photo board every shot in the movie. We would pick the lens. We would pick the angle. We would know exactly how it was going to go. So by the time we were ready to shoot, I didn’t have to stand around on set and be like, “Hmm, what if we put the camera over here?” I knew where it was going to go. Now obviously, you have to be prepared for it to pivot. If your actor has a different idea, if something doesn’t work right, those are just good guides that could be thrown out in a heartbeat, but it really took a lot of the stress of directing away from me, so all I had to do really was focus on the actors. 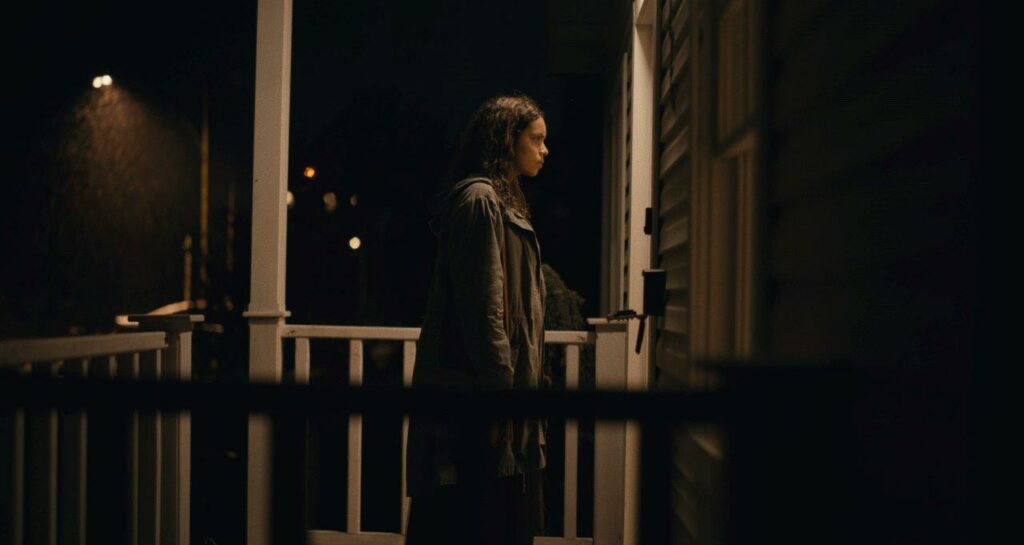 Nice! So you said you were planning out shots on location. The neighborhood is an essential point for the plot. What was it like scouting locations for that perfect neighborhood? Or did you build it on set?

We built it. So we shot in Bulgaria, and our hero block is just a field in Bulgaria. We built thirteen facades, and we had to be very clear about what we were going to see in our flashbacks, so just the surfaces that were going to be visible in the flashback – we rebuilt to look like the ’80s so they were all healthy. And that was a challenge! It was really, really hard to pull that off, to make it look right. A lot of the houses that are across the street from our hero house are built against the side of a laboratory, and in between them, if you look closely, you could see the wall of the laboratory. I was kind of convinced during production that that was going to be the death knell of the movie – that everyone would see that brick wall and be like, “Well, this is fake. This movie sucks!” But no one has ever noticed it. It just goes to show, there’s things that you can really stress about while you’re in the throws of production that really don’t matter, and then, there’s other things that pop up that really do, and you didn’t realize that they would be important. It’s tough. It’s not a science, and you just have to roll with the punches.

Well, I didn’t notice any wall at all!

Well, I appreciate that!

On the subject of the setting, much of the tension of the first third of the film is due to the ominous atmosphere as the house becomes stranger. That’s a testament to the amazing sets. What kind of inspiration did you bring to that set design?

You know, I don’t know what the inspirations for the set designs were. It was just in my mind as I was writing. These passages, I just pictured them as a clapboard warren of corridors and little rooms here and there that felt dank and stinky. I looked at a lot of images of mine shafts, I sent a lot of mine shafts to my art director and I looked up some real dungeons that, unfortunately, people have built in their basements to imprison other people. So I did some research into that. It just needed to look like one man built this by himself. Nothing could be fancy. Extension cords, PVC pipe, raw surfaces, dirt everywhere. It was more about the narrative of what was at his disposal as he built this place. That’s kind of what we started with.

What inspired you to write BARBARIAN?

I had read a book called The Gift of Fear that was encouraging women to pay attention to these red flags that men can give off in their day-to-day interactions that might seem innocuous, but if you ignore them, you do so at your peril. I was kind of struck by the realization that this is not part of my mindset at all. As a man in the world, I don’t have to be on guard against half the population that could pose a potential threat. That was a big deal for me, to marinate in that. So I just wanted to write a scene that would be a woman entering into a situation that I could load with as many of those red flags as possible. I thought of a double-booked Airbnb, and I just started typing away. And I gave him a lot of little tiny things that would stress me out if I was in her situation without trying to tip him too far into a clear villain. That sort of tightrope walk was the first step in writing this movie.

Yeah, Bill Skarsgård is great at toeing the line between charming and spooky; He brings that to almost every role. 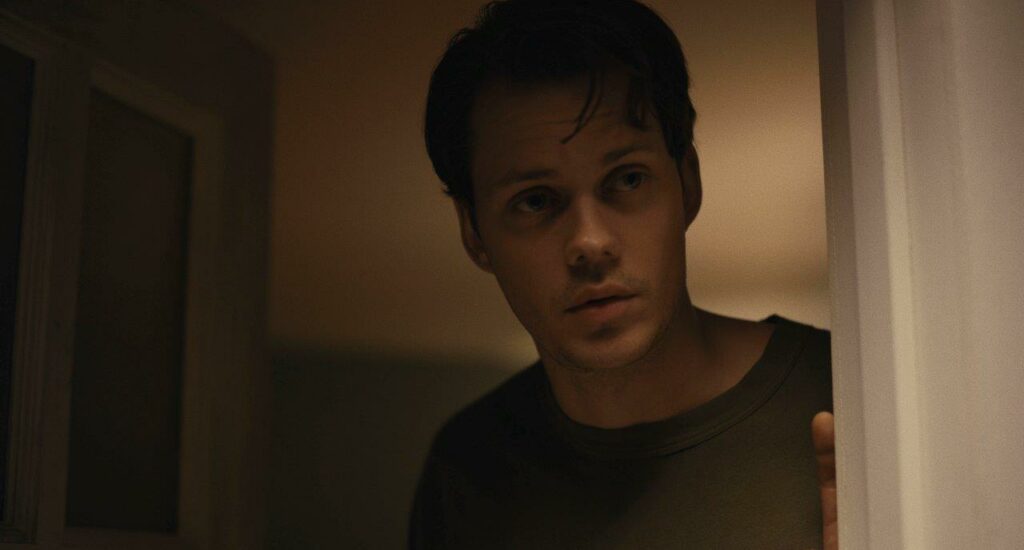 What made you land on the title “BARBARIAN?”

I had to save the document, and I had to come up with a word to put in the blank, or it would be called “Untitled Screenplay 2,” and I think in that first writing session, I called the street Barbary Lane, so I just wrote BARBARIAN. I didn’t really think about it, and then, I just kind of became attached to it. And now I feel like it’s an appropriate title. It seems to fit nicely. Since then, people have pointed out to me that the word “barbarian” is an anagram of “Airbnb,” and I promise I was not thinking about that when I wrote it.

You should take credit for that.

You have a bit of a comedy background. You’re one of the creators of The Whitest Kids U Know. What was it like transitioning from comedy to horror?

It wasn’t a calculated thing. Again, I was just writing this to entertain myself. I wasn’t like, “This will be my new career path.” But I do think that comedy and horror are very closely related. They’re both about subverting expectations. They’re both about timing and tone, so I think my time spent in comedy was not wasted on this new flavor. 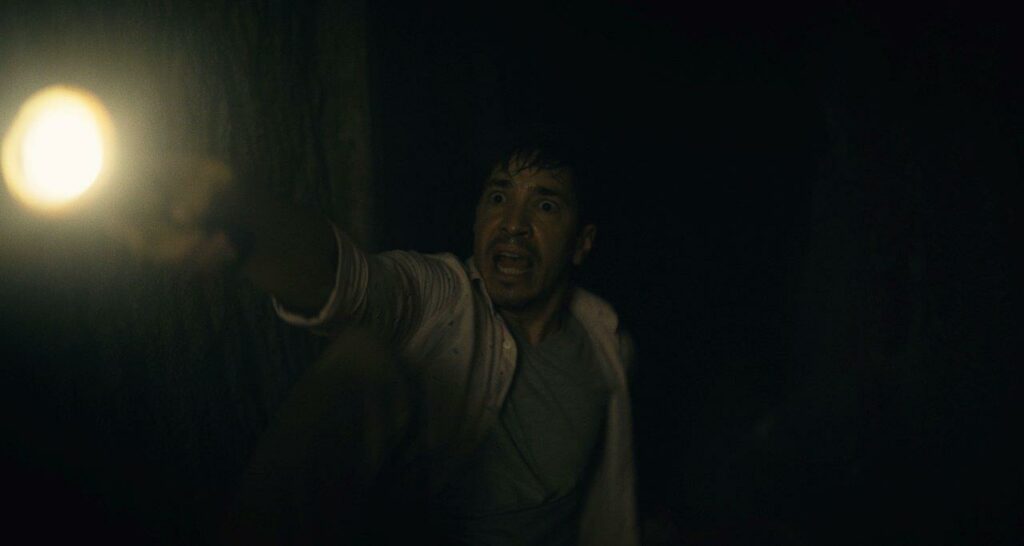 I loved the score of the movie. It’s kind of all over the place but always fits the mood. How much creative input do you have with the score?

A lot. You build a temp score when you’re editing your movie. You pick other music from other movies and you lay it in. it’s a tough thing, especially for a first-time director, not to become too attached to the temp, and I had kind of a rocky road on the score. I hired this woman, Anna Drubich, with three weeks to finish the movie. She came on very late in the process, and I basically needed her to pull a miracle out. And as far as I’m concerned, she did. To score an entire feature in three weeks’ time is unheard of. We spent a lot of time together with me just going, “I think at this part it should be PA-RUMP-PUM-PAPUMP,” just singing in her ear and her just rolling her eyes and nailing it. So yeah, it was stressful, but it was great.

Yeah, I loved the score, there were notes of ’80s synthwave at times…

The song that you are referring to is actually a needle drop. iI’s a song called “Necro” I found it on Spotify by this British woman named A001, and I wrote the movie listening to that track a lot. Yeah, so when she walks down that dark hallway, and it’s just that BOOM…BOOM…BOOM, that pulsing synth, that’s a track, that’s not actually part of our score, but it works great. I love it.

Oh yeah, it was perfectly paired. Now I have something to look up on Spotify!

The Whitest Kids has an animated feature that we are almost done with. It’s called MARS. It should be done by the end of the year. We’ve been working on it for a long time, so I’m very excited to release that into the world. As far as my next directing project, I don’t know. It remains to be seen.

Okay, so they aren’t kicking me out just yet. I’ll hit you with one more silly question. Would you have investigated the secret entrance if you had found it in an Airbnb?

I think if I was locked in that basement for as long as she was, and I saw that there was a door at the end of that tunnel, I think I would have because I want to get out of there. I think I would’ve done what she did. Now, I don’t know if I would’ve gone down deeper, but, if my friend was at the bottom of the stairs screaming for help, maybe I would’ve. I don’t know. It depends on how altruistic I’m capable of being.

I am ignoring a lot of red flags! I think you’re right. Good point!

BARBARIAN is in theatres now!