An unhappy housewife is murdered – Holy Bonkers! The prostitute who witnesses the crime becomes the Killer’s next intended – Gasp! And the housewife’s son teams up with the whore to solve the case because the eighties are all about bringing people together.

This week I’m breaking down the horror-thriller classic DRESSED TO KILL by my longtime boyfriend Brian De Palma (if you’re reading this Bri, please text me back…none of my messages are delivering). A couple of weeks back, we talked about how De Palma wanted to direct Cruising. Well, this is the film he made instead. While we can all agree Cruising would have benefited from Mr. De Palma, DRESSED TO KILL is a suspenseful yarn that serves as an early example of mental health and trans visibility in cinema. The film stars Sir Michael Caine (of Miss Congeniality fame), Angie Dickinson (Big Bad Mama), Nancy Allen (Carrie, Robocop), and Keith Gordon (Christine). Directed, of course, by Brian De Palma (Sisters, Carrie, Scarface) with music by Pino Donaggio (Carrie, The Howling, Seed of Chucky).

How’s this for six (or fewer) degrees of (sequel) separation? Keith Gordon is notable for playing one of the nerdy teen sailors in 1978’s Jaws 2. Sir Michael Caine also starred in Jaws 4. I like to think on the set of Dressed to Kill Michael Caine was like, “Oh you did a Jaws sequel? I wouldn’t be caught dead.” Moment of silence for Jaws 4: the Revenge. 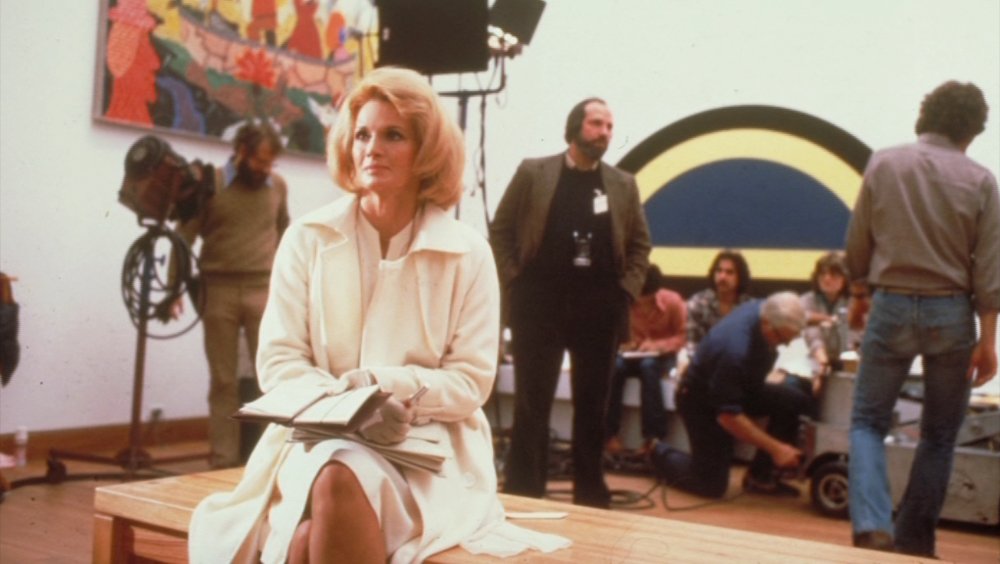 The film opens with a decadent shower scene. Wait…a shower scene…in a De Palma movie…as the opening!? Kate Miller (Angie Dickinson) takes the world’s most sexual shvitz. As she rubs the yellow bar of soap around her nipples in lovely little circles I wondered if I had been missing out, if perhaps my showers, and my life as a whole, would be improved by taking a bar of soap to my nips. Can I just say I think it’s so outstanding that just four years after Carrie’s brilliant opening sequence in the locker room showers, De Palma gives us another stellar erotic bath time moment? Yes, I think of Carrie, but then I think: wow these are so different. And then I wonder where De Palma comes up with this stuff, and does the pervert live in a house made entirely of showers? No one does a foggy fantasia of sexual perversity better.

Kate goes to an appointment with her therapist, Dr. Elliot, played by Caine. They engage in pretty mild talk therapy that doesn’t fully give us insight into Kate’s psyche but I did find this scene kind of exciting. Major depressive disorder was first recognized the year this film came out with the publishing of the DSM-III. And it’s only been seven years since homosexuality was removed from the DSM-II as an illness/disorder. So watching this movie today you’re like, “kind of indulgent, hollow representation of talk therapy and depression,” but at the time, it was almost groundbreaking (also check out the non-horror mental health trailblazer Ordinary People released the same year).

After her therapy sesh, Kate heads to the Museum of Modern Art which is apparently a place she goes to pick up men. I would love to snatch up Gentlemen Callers at a museum. Ugh. So classy. In a masterful nine-minute sequence, Kate follows her would-be paramour through the many rooms of the museum. It feels like a Hitchcock fever dream: the tension of Psycho, the sexual dizziness of Vertigo, and the taboo vibe of Rope. Brian De Palma knows good foreplay. Remember how long it took them to actually dump the bucket of pig’s blood?

“Brian De Palma knows good foreplay. Remember how long it took them to actually dump the bucket of pig’s blood?”

Kate follows her mysterious man outside and into a waiting taxi where they fully start having sex. Nice. Eventually they make it back to his apartment for more sexy time, and after the dreadful sin is complete, he passes out. Mind you this dalliance takes place at lunch time. I can’t imagine a world where I put down the tuna salad at 12:45 to get laid. She sneaks out of bed and gathers her clothes, tip toeing about like a horny Grinch robbing all of Whoville of their orgasms. She retrieves some stationary from his desk, presumably to leave her number, and then she does the sexiest thing anyone can possibly do: Kate Miller writes in cursive.

She’s out of the apartment and on an elevator that moves slightly faster than the one Laurie rides in Halloween 2. As the door opens, the Killer strikes. Donned in a black trenchtoat, Kim Novak wig, and black sunglasses, the Killer wields a Sweeney Todd razor to carry out her murders. Death in a confined space? Sounds familiar. A strong female lead purporting to be the protagonist but who bites it in the first half? Brian De Palma isn’t just homaging Psycho, he’s making Psycho part of the narrative.

Liz (Nancy Allen) is in the same building visiting a client (does everyone have sex at lunch?) when she discovers Kate’s dying body. She looks in the elevator mirror and spots the Killer. For frame of reference, our Big Bad looks a little bit like Blade from the Puppet Master series.

Between the museum segment and another long sequence where Liz evades the Killer on the NYC subway, De Palma is clearly a fan of edging, and I’m here for it. Other director giveaways: long, slow shots (a nod to Rope?) and split-screen moments. During one, Liz talks to her madame on the phone (aptly named Norma) while on the other screen, an interview with a trans woman plays on the TV. By showing this person, De Palma is quietly asserting: not all trans people are murderers. It is the antithesis of Cruising, which avers that all gay men are promiscuous and further goes on to say gay = death. Two things this movie does well: distinguishes the trans antagonist from other trans people and never shames Liz for being a sex worker. 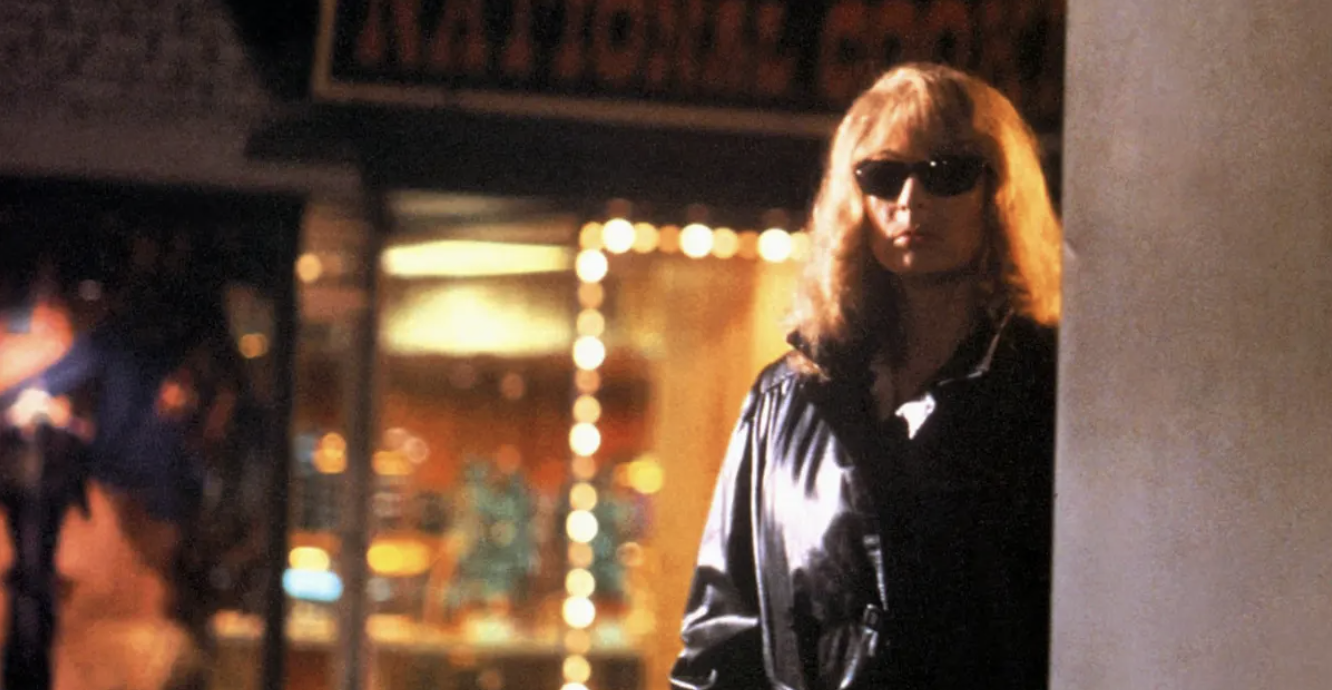 There are moments where you wonder if this movie is just extended foreplay between Brian De Palma and then-wife Nancy Allen, and honestly, I’m fine with that. And don’t come at me with pitchforks because I do enjoy Nancy Allen tremendously, but I kept asking myself, “Wouldn’t P.J. Soles have been fantastic in the role of hooker detective Liz?” She tries to seduce Dr. Elliot as a ruse to get to his Rolodex to locate the murderous patient. Nothing sexier than a man with a Rolodex, am I right, or am I sad? While Liz snoops through his office, Dr. Elliot changes into a black trench coat and blonde wig because Sir Michael Caine is Bobby!

And just like Psycho, the Killer survives and is sent off to the psych ward at Bellevue (which is made to look like the Limelight for some reason). Sticking true to the 1960 Hitchcock flick, Dressed to Kill follows its climax with The Long Explanation. It’s really a magical moment between Liz and Peter where she, in language that is rudimentary through our 2021 vision, teaches Peter what it means to be trans. I kinda loved it. Yes, Liz’s description wouldn’t fly today, but for forty-one years ago I’m impressed. And flawed or not, this tag at the end of the film once again posits the truth: trans people are not murderers just because the antagonist of this particular horror film is trans. Silence of the Lambs doesn’t go far enough in making that distinction.

Final Thoughts: Dressed to Kill ends with one last jump scare as Liz takes a shower and the Killer stalks her from just outside. It’s a fantastic sequence. With the bathroom door open, Liz stares at the white nurses’s shoes belonging to the Killer, and the reveal is that Michael Caine has stepped out of the shoes and is actually behind her. FUCKING BRILLIANT. But because this is a Brian De Palma picture, we can bet our bottom dollar that the big scary we just experienced was all a dream sequence…and it was. Predictability does not eliminate scares. I love this movie. And here’s the thing: visibility matters. I’m currently reading Cemetery Boys, a brilliant YA horror novel with a trans man protagonist named Yadriel. Yadriel is going to be a terrific role model for young trans kids. I’m glad we’re moving in that direction. But progress does not negate this film. We can live with both Dressed to Kill and Cemetery Boys. We can keep the narrative moving. We can tell more trans stories.

Stop by next time when we discuss 2014’s STAGE FRIGHT. Thoughts? Lamentations? Withering critiques? Gentleman Caller applications? Comment below or reach out to me directly on Twitter and Instagram.