On the surface, this 1980 Al Pacino flick has everything I want: gay filth and murder! I first heard about CRUISING through The Celluloid Closet, the 1995 documentary about portrayals of the LGBTQ community in film, and immediately learned about the backlash and protests surrounding it. Did that taint my viewing experience? Maybe. Did I pun unnecessarily just now? Yes. Yes, I did. So the challenge for myself went like this: you can only watch CRUISING if you give it a fighting chance. You can’t go in hating it right from the jump. Give the hate an opportunity to develop naturally. 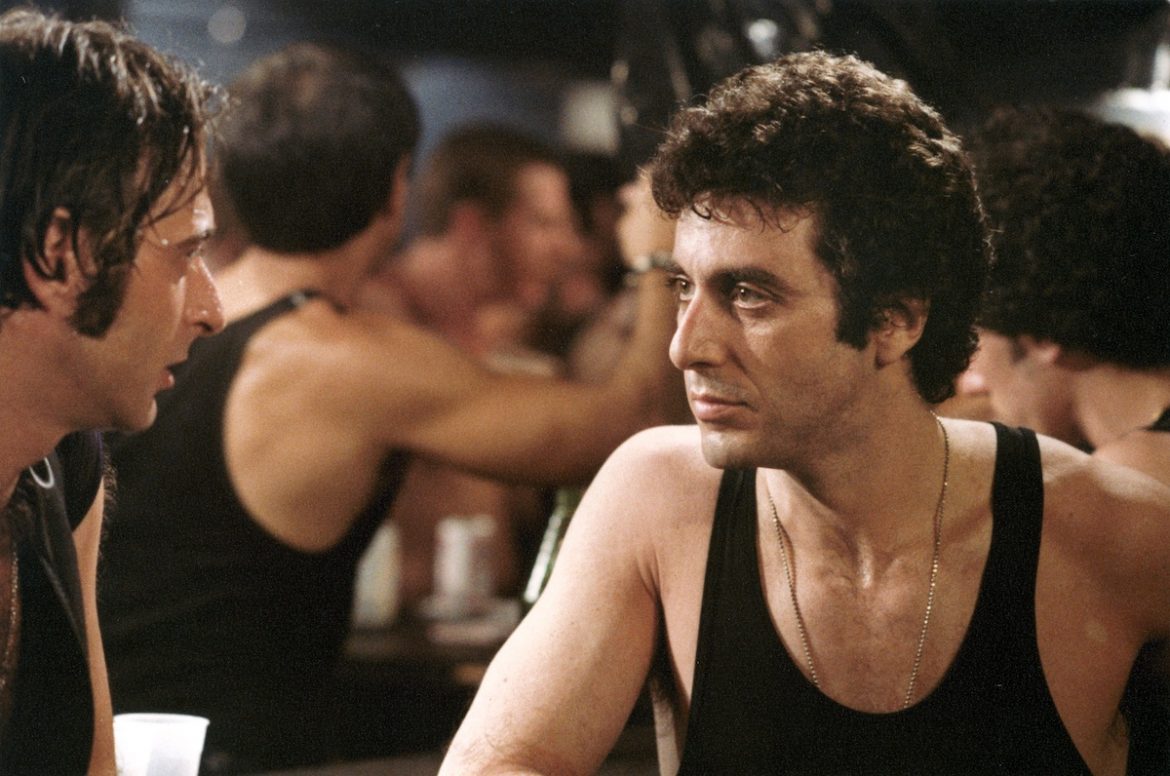 Steve Burns (Al Pacino) plays an undercover cop inserting himself into the raunchy leather scene of New York City in order to catch a serial killer who is picking off gay men one by one. The film also stars Paul Sorvino (Goodfellas) and Karen Allen (Raiders of the Lost Ark, not Margot Kidder). Directed by William Friedken (The Exorcist), CRUISING runs 102 minutes but feels much, much longer (rumors are the original cut is 140 minutes), so pace out your boulevardiers accordingly.

We know this is a “gay movie” because there is a Shelley Winters fat joke in the first twenty minutes. Poppers! Jock straps! Saggy butts! Welcome to the gay underworld of New York City’s thriving BDSM scene.This movie could have done so much more with its spooky atmosphere. Cinematographer James Contner wanted to shoot the movie in black and white; could have been cool, but you can also just watch Madonna’s “Deeper and Deeper” music video instead. This movie has the distinction of capturing modern gay life right before the AIDS plague, which is perhaps the scariest reality of this film: what’s still to come is more horrific.

“I can’t believe you’re not afraid,” says the Killer to his hookup/victim moments before the slaying. Don’t you just hate when foreplay leads to murder? And for the record, where sex is concerned I am always afraid. Call it my puritanical New England upbringing, but can’t we just write each other love letters instead? Why didn’t Brian De Palma direct this movie? He would have made it good! After watching I learned he did want to direct. Sad. Luckily they let him make Dressed to Kill instead (actually a good movie).

Al Pacino does absolutely nothing to assimilate into the gay community (except for lifting weights, something I’ve heard of but never experienced first hand). I suppose it’s lucky for him that none of the leather daddies tested him by asking “Who would win in a fight: Bette Davis or Tallulah Bankhead?”(Obvi Bette). Shouldn’t there be a montage where Quentin Crisp and Harvey Fierstein teach Al everything he needs to know about the gay experience? This movie is so boring it will give you lots of time for daydreaming. It also serves as a reminder that it’s been far too long since you’ve watched Stranger by the Lake, and isn’t that a much better film about gay murder indeed?

What’s most offensive about CRUISING is that they bring in Karen Allen every twenty minutes to have sex with Al Pacino. Wow, way to write a great female character. The scenes of heterosexual sex exist in the film so the audience never questions its heteronormativity and further associates gay sex with death, an association that would be forever solidified once the first cases of GRID/AIDS were diagnosed the following year. We’re not watching a gay movie. We’re watching an Al Pacino/Karen Allen shag fest.

“…contrary to what CRUISING tells us, sexual freedom has before and can still exist safely…”

I will concede the following: the Killer’s voice is very scary. He lives in the creepy lullaby world of When a Stranger Calls and the ironic flirt of Roger L. Jackson’s Ghostface in Scream. The Killer chants, “Who’s here, I’m here, you’re here” right before a murder and it did give me legitimate chills. We know that CRUISING is loosely based on real life murders that happened in New York during the ’70s. What I did not know was that one of the men who got away from this real life killer said that he whispered in his ear, “Who’s here, I’m here, you’re here.” Okay, that fucking scares me. The recreation of actual murder on film always has fright potential, sure, but knowing those are the real words the real killer said all those years ago, holy shit I can’t believe I live alone. No, but seriously, I need a roommate. Do you know anyone?

CRUISING portrays gay men as mindless cattle, picked off one by one in between hits of poppers and blow jobs. Is this how straight women feel when watching Friday the 13th? Let’s talk about that. Horror movies can exploit their foolish victims without being offensive, but this film feels like a denunciation of the sexual freedom associated with the gay leather scene. Slashers aren’t indictments of straight culture because homosexuality doesn’t exist anywhere near Camp Crystal Lake. Therefore straight culture is the only culture. Jason doesn’t kill a straight woman. He kills a woman because, in the world of the film, gay people do not exist.

I could forgive CRUISING if it was made well. But it feels like the creative team scribbled “Make it gritty” on a cocktail napkin in between shots of Sambuca and called it a day. This movie feels like your air conditioner is broken. And then you think: naw, it can’t be that bad, it’s the same guy who directed The Exorcist. Yeah, have you seen The Exorcist lately? Also not a great movie. The Exorcist cut the line and snuck into the party for the Greatest Horror Films of All Time. It can be argued that a haunting musical score makes that film what it is, which makes me question why CRUISING has almost no music.

Al Pacino plays the role as if John Travolta’s character from Grease lost Sandy and did too much blow and had to turn to a life of fisting to pay off his debts. I do enjoy his almost hostile relationship with his supervisor Captain Edelson. And Paul Sorvino gives me major Raymond Burr vibes a la Rear Window and A Place in the Sun. But even their dialogue lacks any sense of humor. At one point Pacino says to Sorvino, “I fingered him but I didn’t think anybody was gonna go that far with him…” AND THEY AREN’T TALKING ABOUT GAY SEX. What a missed opportunity, gay exploitation flick written by lazy straight men. For shame!

In interviews Al Pacino defended the film as he didn’t believe it stigmatized gay people. His reasoning was that he didn’t believe The Godfather films stigmatized Italian-Americans. Okay, Al, you’re lucky you did such a stellar job as Roy Cohn in the 2004 HBO adaptation of Angels in America. 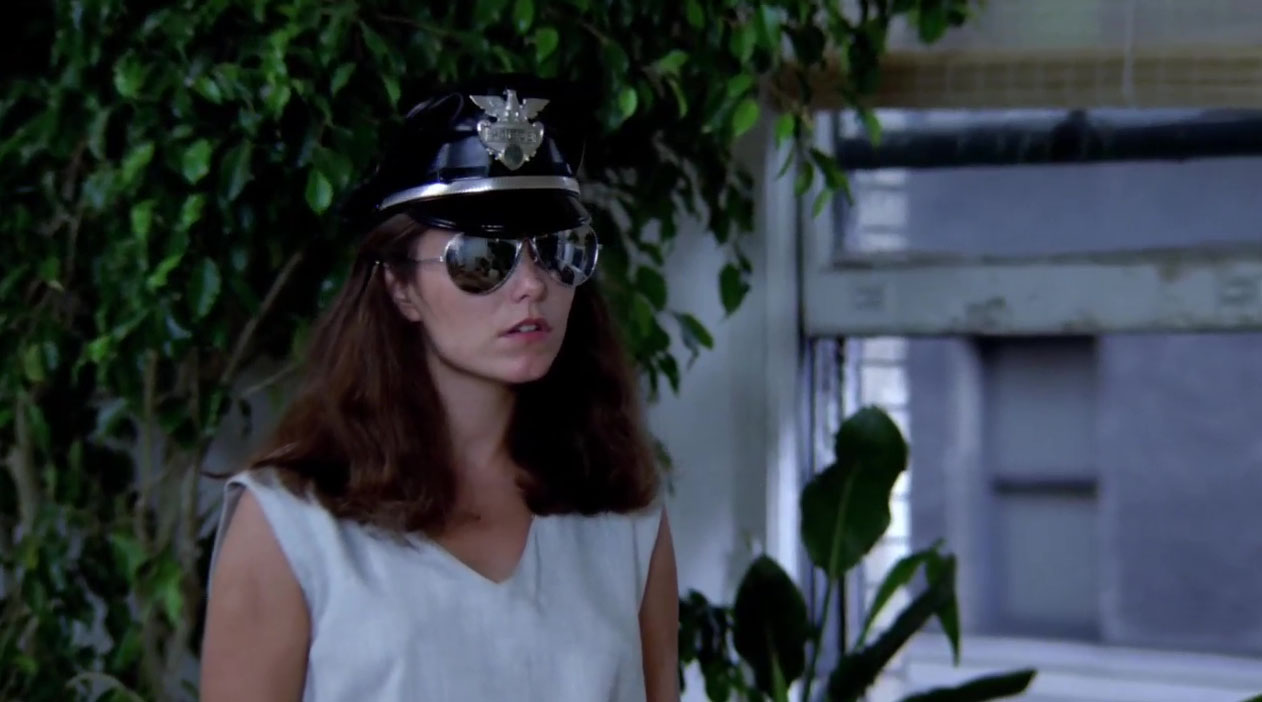 Final Thoughts: I’m glad my gay ancestors disrupted the filming of CRUISING with their daily protests. Gay life changed irrecoverably in 1980. This movie stands at the end of sexual liberation and reckless abandon with which men approached other men. Although I’ve lived in New York City for more than a decade, the world of this movie is a total stranger to me. If you visit New York you’ll find exactly one leather club, the Eagle on West 28th street, a three-story bar with better atmosphere than this movie offers. It is a place where I have celebrated at least three 21st birthdays. When the world fully reopens, I’m looking forward to a time when I can saunter into the Eagle at 2 AM and watch some random strangers have sex. Because, contrary to what CRUISING tells us, sexual freedom has before and can still exist safely, and I believe it will return again. While I might never be brazen enough to strip down publicly and do sex, I love more than anything living in a world where that exists stigma free, in all its musky grace.

Stop by next time when we discuss STRANGER BY THE LAKE. Thoughts? Lamentations? Withering critiques? Gentleman Caller applications? Comment below or reach out to me directly on Twitter and Instagram.