I was very skeptical of DAYS GONE after almost an hour of gameplay was released last year following E3 2018. The video showed off the hordes of zombies and fast gameplay alongside bike and survival mechanics. I found myself less excited but knew there was still plenty of time for the bad bits to get smoothed out.

After Bend Studio and Sony pushed the release date back a couple times, I had higher hopes that the game’s hype would fade away. Turns out a lot has changed from E3 to retail, not all of them good but not all them bad either. Thanks to Sony, I got to play the game a bit early, but it still took a good 40+ hours of play time for me to finally judge it fairly. There have been such mixed reviews since DAYS GONE was released on April 26th, and I am here to say that this game, while it isn’t perfect, deserves a lot more love than it is getting.

DAYS GONE was developed by Bend Studio and published by Sony Entertainment and has served as the most recent Sony exclusive release. It follows the story of Deacon St. John (Sam Witwer), a Drifter two years after a virus ravages the world and turns those infected into “Freakers.” He rides with his best friend, Boozer (Jim Pirri), and survives day to day, still hung up on the loss of his wife, Sarah (Courtnee Draper) whom he put on a helicopter the night the infection broke out and never saw again. Deacon rides his bike in the American Northwest until it’s stolen and Boozer is injured by a group of zealots known as the Rippers, which is when he switches gears to do odd jobs for local camps and earn credits to rebuild his bike so he and Boozer can ride north. He hears that his wife may not have died that night in the helicopter and finds a new reason to survive as he pieces together what happened to her while trying to avoid getting ripped apart by the large swarms of Freakers who wander the virus-plagued land.

I mentioned that this game isn’t perfect. The further into the game you play, the more ridiculous and game breaking the bugs become. There are moments that the character that you are following (and oh my GOD do they walk slow and I mean SLOOOOOOW) gets stuck behind a wall or just falls right through the ground itself and you are forced to restart your checkpoint and lose whatever progress you just had. The gun play is mediocre and driving the bike can get infuriating, especially when you have about a hundred hungry Freakers behind you and you run right into a tree because the bike controls are so touchy. Outside of the touch-and-go controls, the outstanding voice acting is sometimes too good for the lack of excitement that goes on in the game, like wearing a ballgown to a parent teacher conference. Sometimes less is more.

While the game is graphically beautiful, there are moments after the map expands where the environmental graphics lose their luster; the details muddy and the ground textures won’t load or just aren’t there. Character models and motion capture are great, but when they speak, it does have a PS3 quality about it which is a little disappointing, and that’s when the audio matches the mouths at all. During later cut scenes, the audio was ALL off and sometimes the audio disappeared altogether, which is a shame considering how good the actors did with the dialogue.

It may sound like I am being a negative Nancy toward the game, but I actually LOVE this game! I have been playing it pretty much nonstop for two weeks now, and there is still a ton to do. Even beating the main story doesn’t mean you are done, because there are so many side stories to finish, plus a secret ending that leaves a HUGE open end for a sequel. I also love the voice acting in DAYS GONE – I thought everyone was just phenomenal, especially Witwer. I have been a fan of his since he played Aiden on BEING HUMAN and I have come to expect nothing but greatness from his work. The relationship between Deacon and Boozer was so realistic and had such good chemistry as brothers who ride together, I found their dynamic just as important as the dynamic between Deacon and his wife Sarah in the multitude of flashbacks you get throughout the game to learn what brought everyone to where they are.

The story was extremely engaging and I found myself more intrigued by the story in DAYS GONE than I was for RED DEAD REDEMPTION 2 and that’s saying something. I know most people are done with the zombie genre, but I will always have a soft spot for it. Many of DAYS GONE’S qualities we have seen in many games before: the undead, day and night gameplay mechanic changes, crafting for survival and caring for your mode of transportation. None of this is new, but it doesn’t take away from the great qualities that the game has. While it does have texture and lighting issues (don’t even get me started on the sun rise/set shadow lines that race across the map), the environment of DAYS GONE is at times stunning. The mountains, the weather changes and the sky are all gorgeous. And speaking of graphics, the character models based on the lead actors were amazing. Deacon, Boozer and Sarah look JUST like their actors and I don’t know about you but I don’t mind looking at an animated, biker version of Sam Witwer’s unreasonably handsome face for 60+ hours of main and side missions. I was on the front lines of skepticism in this games quality and I think it deserves more love than it is receiving.

Even though the game never says the word zombie, the undead monsters behave more like the zombies of Asian legends than anything. Shows like KINGDOM have the undead that stalk the land at night while they hibernate during the day. Even though you encounter Freakers and can trigger hordes during the day, they are more active and stronger at night. Much like other zombie games, there are different levels and mutations. The mutations aren’t very creatively named: Screamers scream, Reachers have long arms with claws, Breakers are strong and break everything, Swarmers…well, swarm etc. It’s like DAYS GONE picked elements from all the zombie games ever made as well as elements from RDR2 and pieced them all together in one undead gumbo.

DAYS GONE actually tackles the concept of adolescent undead in the form of Newts. More bashful than Swarmers, these infected turned when they were just children. It’s easy to forget when you are hacking and slashing your way through a rooftop of Newts that these were once someone’s kids in the game. In all of the zombie games I have played, only DYING LIGHT made a child zombie as part of a regular mutation and it was rare to see those. In DAYS GONE, Newts are a common occurrence and reflect the number of children that were turned when the world fell apart. 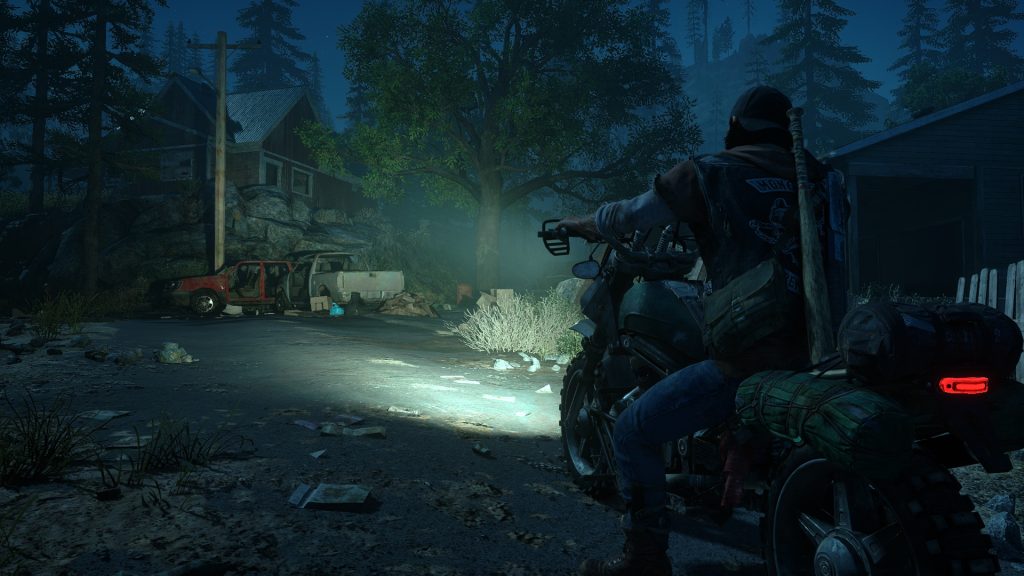 There is so much to play in the world of DAYS GONE. While it sometimes can feel like a monotonous grind to get enough trust to upgrade your bike or that you are the errand boy of the Pacific Northwest, the story is so damn good. The gameplay is challenging when it comes to clearing the massive and swarming hordes that climb all over each other for a bite of the succulent and leather-clad Deacon St. John. Any skepticism I had going in fell away as I connected with the characters, the story and the survival of these people after the world fell apart as they try to hold on to anything that will keep them going.

DAYS GONE is available now on PS4 and I give this one a big recommend.