FrightFest ’21 Review: “THE CHANGED” for the better

The opening titles of THE CHANGED describe it as “a Michael Mongillo conspiracy,” and in fact recent events have conspired to give extra metaphorical weight to the indie filmmaker’s latest feature. Filmed just as the pandemic was about to change the lives of everyone worldwide, THE CHANGED is an INVASION OF THE BODY SNATCHERS variation for a time in which the populace has had to shelter at home, out of concern for a contagion that travels from mouth to mouth.

As the movie, which had its world premiere at Britain’s Arrow Video FrightFest, begins, things have already started to get strange in the suburban community where married couple Mac and Jane (Jason Alan Smith and Carlee Avers, both from Mongillo’s previous DIANE) live. People are acting a little different, and something seems to be wrong, though they can’t put their fingers on what it is. As this particular day goes on, the phones go dead and the odd behavior becomes more direct: Mac’s neighbor Sara (Olivia Freer) comes on to him, while a co-worker tries to assault Jane in a back room. This behavior, it turns out, is neither sexual nor harassment, but attempts to bring the two over to a new consciousness that is gradually overtaking the country. The same goes for what initially appeared to be a joking gesture on the part of Mac’s friend Bill (Tony Todd). 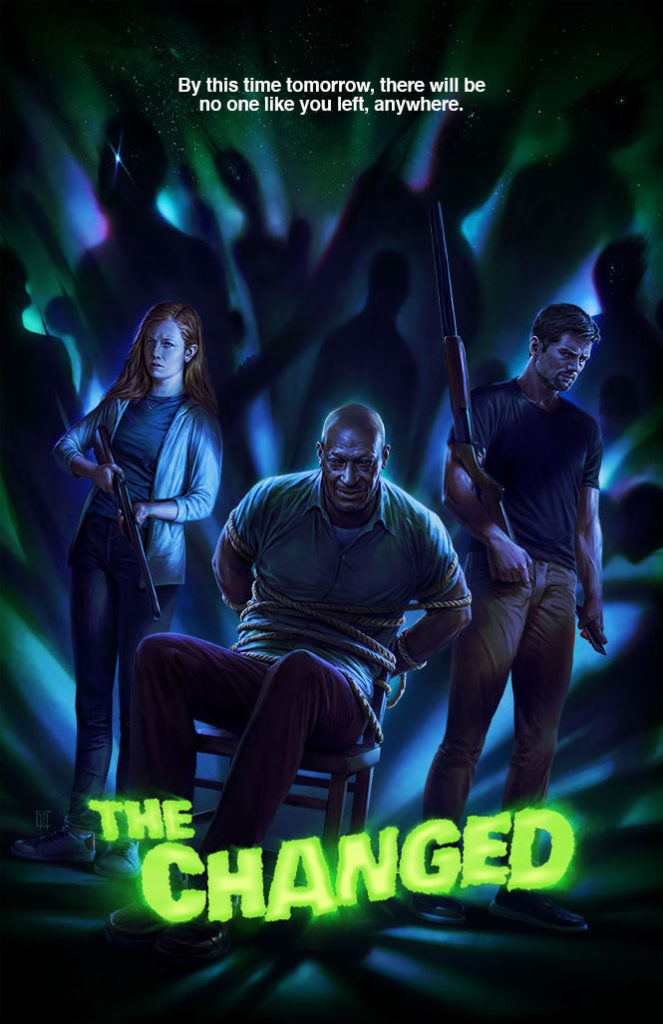 Director Mongillo, who scripted with Matt Giannini, takes a spare, matter-of-fact approach to the scenario, staging a lot of THE CHANGED as static blackout scenes, occasionally intercut with ominous cloudscapes. He lets the situations and performances speak for themselves, and his cast is up to the task. Another key member of the ensemble is SINISTER’s Clare Foley as Kim, a teenager who has also sensed things going sideways at her high school, and who joins Mac and Jane in their home as things become more threatening outside. Her uncle Kurt (Doug Tompos) soon arrives to take her home, and Bill also becomes part of the escalating tension within the house’s walls.

Mongillo makes effective use of siege-horror standards dating back to the original NIGHT OF THE LIVING DEAD and beyond–radio broadcasts revealing some (but not all) of what’s going on in the world, one character whose obtuseness threatens the rest, etc. What’s fresh and tantalizing in THE CHANGED is how seductive the change itself becomes to some of the small band of holdouts. Succumbing to this new identity doesn’t mean losing your humanity or your consciousness, but rather–or so the altered people promise–being given the chance to become your greater self. “Your desire to stay what you are is what limits you,” says one, and another offers, “Inside each of you, I can unlock the true potential of humanity.” As the film goes on, that doesn’t sound like such a bad prospect to at least one of the protagonists, which leads to some of THE CHANGED’s best moments.

To this end, the casting of Todd is especially astute, and not just because he starred in the 1990 NIGHT OF THE LIVING DEAD remake. Introduced as an older voice of authority, Bill later becomes the representative of the change, and a key agent in attempting to convince our heroes to join the other side. Up to an ending that will likely polarize some viewers, it’s the question of who will willingly give in rather than who will survive by fighting that elicits a good deal of THE CHANGED’s drama and suspense.