In the monster movie SLAPFACE, the title doesn’t refer to the monster. Instead, Jeremiah Kipp’s expansion of his well-received short film opens with young Lucas (August Maturo) and his adult brother Tom (Mike Manning) playing a mutually abusive game that is monstrous in its own right, and speaks of the dysfunction in their lives. It’s an arresting way to begin an intelligent and sometimes deeply disturbing study of how trauma echoes down past the initial tragedy, with a creepy creature adding extra shudders.

In SLAPFACE, which will in fact see exclusive release on Shudder next year following festival play (including a berth in last month’s Arrow Video FrightFest), Lucas and Tom have lost their parents in a car accident that they themselves escaped. They live in a tiny house in the woods, with Tom evidently doing the minimum of work required to support them, and Lucas getting into the kind of trouble that inspires a serious warning from the local sheriff (Dan Hedaya, who has just a handful of scenes but makes them all count). Lucas has something of a girlfriend, Moriah (Mirabelle Lee), though her affection doesn’t extend to taking his side when her obnoxious twin pals (Bianca and Chiara D’Ambrosio) bully him. 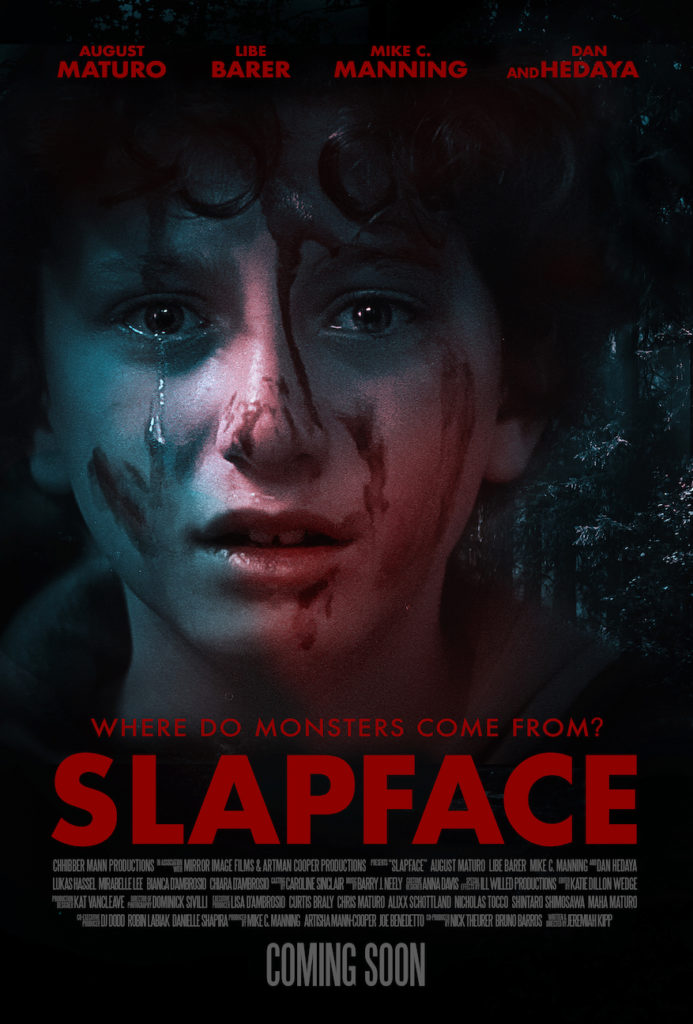 With no stability in his life, Lucas makes a new “friend” while exploring an abandoned building on the edge of town: The Virago Witch, who has legendarily claimed numerous little lives over the years. At first threatening Lucas as well, she becomes his sounding board and protector, and an effectively eerie, unspeaking presence, her face largely shrouded in shadows and darkness. Cinematographer Dominick Sivilli gives us just enough glimpses of the strong makeup effects by Ill Willed Productions, and in general suffuses SLAPFACE in well-caught rural atmosphere, using magic-hour sunlight and shafts of illumination into otherwise dark rooms to expressive effect. Barry J. Neely’s distinctive score also does a lot to draw us into both the poignance and terror of Lucas’ situation.

Things seem to look up a bit for the boy, from an initially unexpected source: Anna (Libe Barer), whom Tom picks up in a bar and brings home one night. At first, her presence in the house seems another sign of Tom’s irresponsibility, but as she becomes his partner, Anna also develops into a potentially better influence on Lucas. She tells him she’s a Wiccan–“a good witch”–though it’ll be hard to compete with the fearsome female fiend who is taking over Lucas’ psyche. No one else sees the Virago Witch, but this is no mere “does she exist or not?” cinematic game; Kipp successfully weaves an observant study of the cruel realities of growing up with supernatural themes, in which each complements the other.

Maturo, previously seen in THE NUN, makes all the right moves as the grieving Lucas, while Manning brings a core of decency to the often immature Tom, who’s been thrust into a parental role he’s not ready for. (Viewers who recall PARTY OF FIVE might get a chuckle from Manning’s resemblance to Matthew Fox, who played out a similar if witch-free scenario there.) And Barer is easily sympathetic as a potential stabilizing presence in the brothers’ lives. Unfortunately, things only become darker for all involved as the witch (given a strong physical presence by Lukas Hassel under all the prosthetics) increasingly comes to the fore, and a scary, unexpected development midway through makes it clear Kipp will be uncompromising as he takes his story down its inevitable and distressing path. Without straining for shock effects (there are no cinematic slaps to the face here), he and his team have crafted a film that gets under the skin of both its characters and the audience.