From the opening minutes of CRABS!, in which a nuclear power plant explosion rendered with cartoony CGI is followed by a naked couple (one of them a dude named “Sequoia”) doing the wild thing on a beach, you’ll know whether you’re on board for this movie or not. I always enjoy a good nature-amok flick, or even a not-so-great one that’s been done with enthusiasm, so I had a pretty decent time with this one.

A world premiere at Britain’s Arrow Video FrightFest, CRABS! may have disappointed some of the local crowd by not showcasing the species of crustaceans that rampaged through UK author Guy N. Smith’s notorious series of CRABS novels. Instead, it’s bloodthirsty horseshoe crabs that crawl up out of the surf in Mendocino, CA to attack first that frisky couple, and soon other victims. From the beginning, writer/director Pierce M. Berolzheimer goes for the rock-scored spirit of 1980s B-shockers (other than the clean, drone-happy digital photography by Andrei Bowden Schwartz), establishing a teen couple as our eventual heroes. Phil (Dylan Riley Snyder) is a wheelchair-using science wiz, Maddy (Allie Jennings) is his spunky girlfriend, and the two have an immediately likable chemistry that keeps us engaged in between crab attacks. 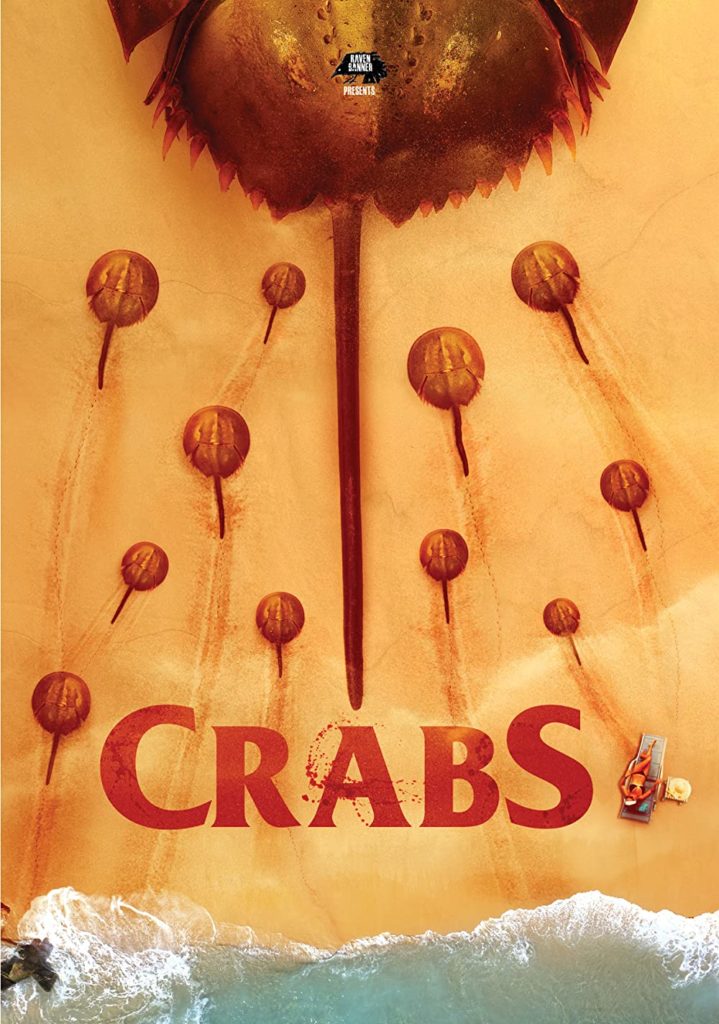 It’s also nice to see a differently abled person in the lead of a low-budget creature feature, though Berolzheimer loses some of those points with the character of Radu (Chase Padgett, who also performed a few of the creatures). An exchange student of indeterminate Eastern European background, Radu is a tired and unfunny stereotype who has entirely too much screen time as he joins the small group attempting to stop the crab invasion. This also includes Sheriff Flannigan (Robert Craighead), his deputy Hunter (Bryce Durfee), who’s Phil’s older brother, and biology teacher Annalise (Jessica Morris), Maddy’s mom who’s introduced in a funny slow-motion bit, and who romantically sparks with Hunter.

Fairly early on, Flannigan and Hunter come upon a beached and eviscerated whale corpse indicating a much larger threat lurking in the deep. There are in fact three different stages of the shelled critters, kinda like ALIENS’ xenomorphs: the horseshoe crabs, which are partial to glomming onto victims’ faces; 6-foot humanoid beasts; and the eventual titanic monstrosity. Berolzheimer also homages GREMLINS as the little creatures scamper around making odd chattering sounds, and explicitly when a bunch of them get up to shenanigans in a bar. There is, of course, a high-school prom for the monsters to invade for its big setpiece, and the final act hews to the more recent tradition of microbudget creature features from The Asylum and their ilk.

The digitally created/composited beasts never look like anything but, while the practical creature effects by Jim Ojala and his team are rather more persuasive, if exaggerated. He has also contributed a significant amount of splatter that, along with an unnecessary emphasis on dialogue profanities, puts CRABS! off limits to the younger kids who might otherwise enjoy it. For teen and older fans who can get into its goofball spirit and its clear love of animal-attack mayhem, CRABS! is a diverting, no-longer-than-it-has-to-be 80 minutes that will fill the bill for future festival/late-night screenings and alcohol-fueled watch parties.