Somewhere within Oliver Stone’s Wall Street and Cronenberg’s The Fly there are kernels of comparison that hint at what MOSQUITO STATE is about. However, comparing the new Shudder Exclusive film to anything that’s come before would truly be selling it short. Achingly beautiful and saturated with existential dread, MOSQUITO STATE quietly sneaks under the skin while providing a heightened viewer experience through a unique and specific lens.

Rue Morgue recently caught up with Rymsza to discuss the origin of MOSQUITO STATE, the historical benefit of hindsight, and what it was like working with some true icons of the film industry. 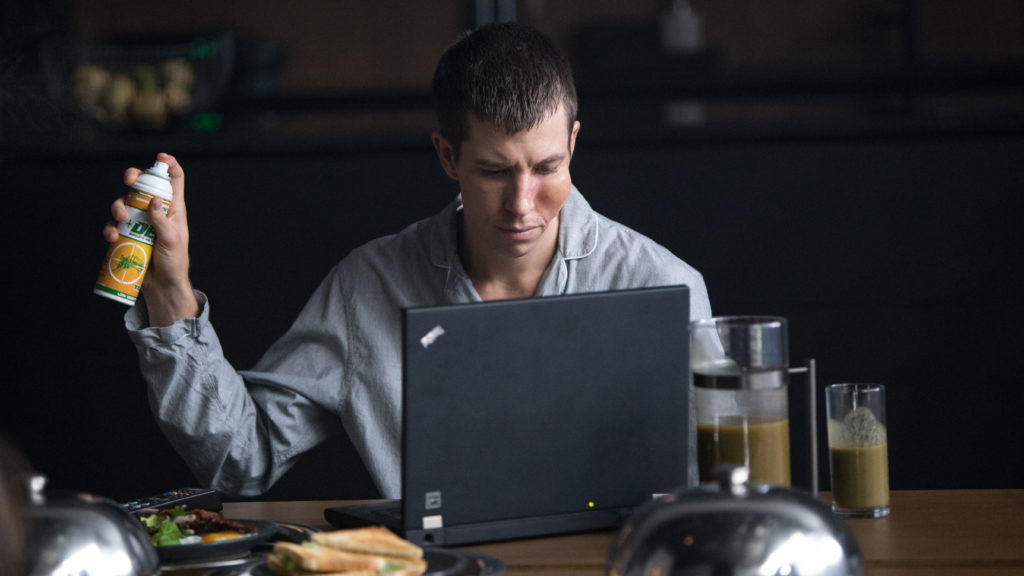 Not only did you direct MOSQUITO STATE, but you also co-wrote it with Mario Zermeno. Tell us a little bit about how this unique story came to be.

It originated with Mario in the sense that this actually happened to him in his downtown L.A. apartment. It was infested by mosquitoes, and I thought that there was something strangely cinematic about that. I didn’t know what to do with it, but I hadn’t seen it done. I also liked the idea of this slow-burning psychosis and the fact that that was something he was actually going through. So that’s where it started.

Then, I challenged him to write down what he was going through. What was born was something really abstract and more akin to expressionist theater than film. You know, this protagonist would go on four-page monologues and I didn’t know what to do with it. But it stayed with me. I think it was then like, two years of me not answering Mario’s phone calls when he asked me, “What’d you think?” But it still just stayed with me, [and] two years later I reached out to him and I said, “You know what? I think there’s something here and I think I found a way into it. If you trust me and want to go on this journey with me, I want to keep your title, but throw out everything else.” And he agreed.

The film takes place during a very specific and tumultuous week in 2007 against a highly consequential political backdrop. Why was this the time period you wanted to set your film in?

Well, I was reading Flash Boys: A Wall Street Revolt at the time and it came out of a need in a way. Because, if I have a protagonist who is fascinated by mosquitoes and befriends mosquitoes, and wants to study their ecosystem, I wanted it to be something that would influence his work. I wanted for him to already be doing something that would, in a way, layer onto that fascination or that obsession.

There was a character in Flash Boys who was dubbed “The Golden Goose” who was this quantitative analyst. The more I researched it, the more I found that time period to be really interesting, and as I started to narrow in, it particularly became that one week, August 3rd to August 9th. I just felt like the more I dug, the more I saw. I was just going through what was on TV each day, what was going on in the news, and looking at how the market was behaving. Then, I’d just take a broad look at it, and, as if the character of Richard was an algorithm himself, I was feeding him all this data. We’re talking about sports, we’re talking about pop culture, journalism, politics, and technology. So, all of these things that I placed in the background actually happened that day.

To me, it was just very foretelling about what was to come a year from then. But also, we were talking about all the black swans that we met [Editors Note: a black swan event is a “metaphor that describes an event that comes as a surprise, has a major effect, and is often inappropriately rationalized after the fact with the benefit of hindsight”]. Obviously, at that point, I was looking at Trump as a black swan, but now we have COVID as a black swan as well. So looking at all of these things and looking at these very chaotic datasets, they all just show that we are terrible at predicting what’s going to happen. Like, as much as we think we know about what’s going on in the world, it surpassed our ability to hone in and predict it a long, long time ago.

You mentioned Richard, who is portrayed in the film wonderfully by Beau Knapp (Death Wish, Destroyer). What was it like working with Beau and how did it feel to see this character of yours brought to life?

I mean, he was incredible, and this character is so unlike him! To me, that just shows how strong of a performer he is and his level of dedication. Because it really started for me with the physicality and him dropping weight and then convincing me that he was the right actor for the part. I had this shortcoming where I couldn’t see through his physicality, and he kind of brought this character in with some of these very internal postures; he had his shoulders collapsed and he was kind of walking with this one dead leg. And then also the way that he would react around Lena with all that awkwardness. Beau brought so much to it and it was really fun to then dial it up and dial it down and really play with some of the nuances. He really is a terrific guy.

You worked with renowned composer Cezary Skubiszewski for the film’s score and it’s quite a fascinating piece of music. What was that working relationship like? Did you go into it having a specific vision?

As with much of this film, I was very specific. I had temped it with Penderecki and it was predominantly strings and then these big choral movements. So, when I sent him the film – different composers like to work in different ways – I asked him if I should just strip all the temp score, but he wanted to hear it, and it did influence things a lot.

Then, when we finally came down to it I told him, “Hey, I really want to do an experimental score and I just want to do the strings. I want the score to mimic the sound that a mosquito would make and try to find some avant-garde way of doing that.” That’s when he brought the harmonium to it and a couple of other elements just to give it a little bit more lightness. But we stayed pretty true to what the temp was and he did an incredible job. We actually recorded the music in Warsaw with a lot of Penderecki’s orchestra so it was really cool how that ended up coming full circle.

And then it was a similar thing with the music licensing, I mean, some of that stuff I had in my head and then some of that stuff I had in the script. For example, I had the Schubert in the script, [and] “Turn, Turn, Turn” which is part of the eulogy then given to Mother by Richard. So, all that stuff was already very narrative and in there. Some of the other stuff, it was just like the usual process of going and listening to a bunch of tracks and trying to figure out what works, because you can’t always afford Frank Ocean. [Laughs] With that, it was mostly just feeling it out and seeing what fits once the movie was together.

The sound design was also a ton of fun just because of all the mosquito sounds and trying to find what we could use. We ended up using a kazoo because we couldn’t figure out how to give an individual mosquito the sound as it is coming in closer and also flying away from us. Also, just the spareness and the echoes of Richard’s place and the things we hear. It was really fun to play with that space.

So, there is another pretty incredible name listed in the credits for this film that I have to ask you about — Dan Perri. He not only did the wonderful title sequence for MOSQUITO STATE, but he is also one of the most iconic title designers in the world with credits that include Star Wars, The Exorcist, Taxi Driver, and The Warriors. Tell us a little bit about how he became involved with the project and what it was like working with him.

That was through Bob Murawski, who was one of the editors. Bob and I worked together on [a series of] Orson Welles film [projects], so, we had a history together. I think around then I was cutting a film that Dan was on and Bob was really struck by him because of how legendary he is, but also because at that time he was kind of semi-retired. I think he actually came out of retirement to do the new Suspiria. I remember seeing the title design for Suspiria which was just…it was simple, but it was so graphic and so beautiful. So that’s how that came about.

It was then Dan’s idea to go into da Vinci’s notebook at the beginning and we then went back and forth. I had all of this macro footage and I wanted it to be kind of a stop motion thing where we would freeze at these moments and go back to the notebook. I had the kind of structural idea of starting the film underwater, tracking a single mosquito, and then ending it underwater which Richard is looking up at all the mosquitoes kind of multiplying, but it was Dan who came up with this really inspired idea that got me there. It’s amazing working with collaborators like that because as you’re firing off ideas and inspirations, it has this ripple effect. He was incredible to work with.

MOSQUITO STATE is one of those films that really has a lot of layers and can be interpreted in a variety of different ways. What do you ultimately hope audiences takes away from the film?

I mean, I hope it makes them think. It is left open-ended for a reason and I hope some of these images stay with them. Especially coming to Shudder where it is predominately horror, this will be more psychological horror or a psychological thriller that’s a bit more avant-garde. I hope for some it will introduce a kind of artier side of the genre. Because to me, when I started making this film, I really didn’t think about it as a horror film at all. So, it’s coming from the sensibility of somebody who didn’t think we were making a horror film. Hopefully, that kind of broadens the horizons and starts creating sub-genres within this broader genre. I’m eager to hear what the feedback is and hopefully, it surprises people.