Fantasia ’20 Review: Lots of reasons to be afraid of “THE DARK AND THE WICKED”

Twelve years ago with THE STRANGERS, writer/director Bryan Bertino deftly exploited fears of being trapped in an isolated house with evil presences lurking outside. His new film THE DARK AND THE WICKED also focuses on a couple of imperiled characters in a remote home, only here, the terror stems from within.

THE DARK AND THE WICKED (which had its international premiere at the Fantasia International Film Festival and goes into general release November 6) taps deep into the familial anxieties that have proven to be fertile ground for horror filmmakers in recent years (it’s not hard to imagine Bertino pitching this to the money people as the next HEREDITARY). Yet there’s a very singular, personal feel to the movie, which Bertino developed and filmed on his own family farm–and which one hopes is not too closely based on his own experiences, as this is one of the most unnerving under-your-skin creepfests out there. It exerts an eerie hold on you right from the opening frames, in which we’re introduced to elderly Texan Virginia Straker (Julie Oliver-Touchstone) tending to both her livestock and her bedridden husband (Michael Zagst), who is clearly not long for this world.​ 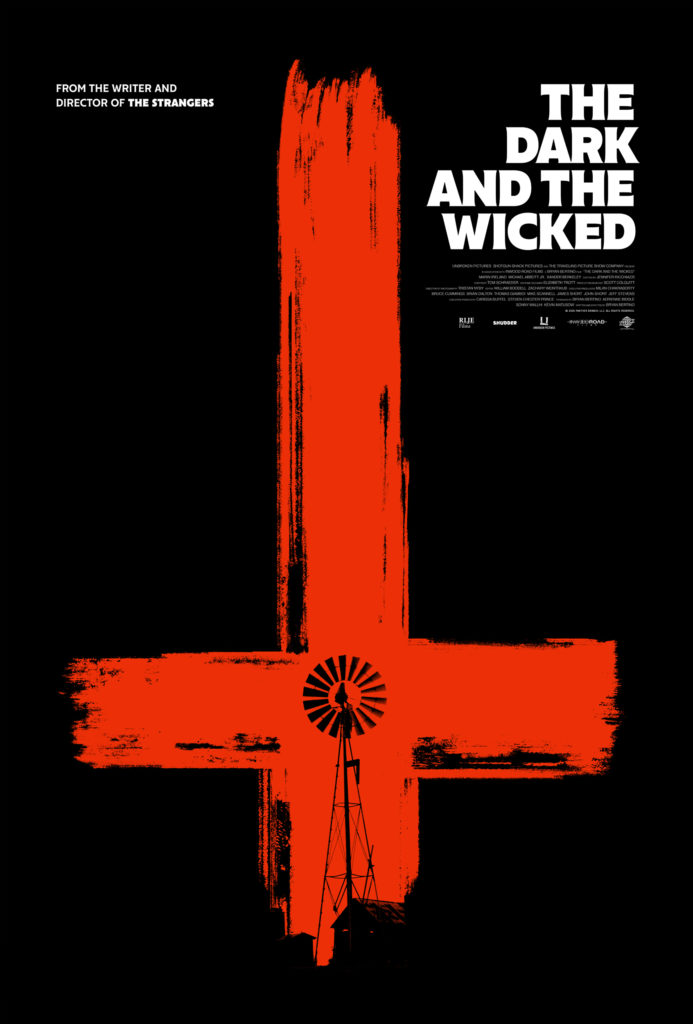 On “Monday” (the movie makes effective use of these daily-chapter headings, which complement the sense of impending doom), the Strakers’ grown children Louise (Marin Ireland) and Michael (Michael Abbott Jr.) arrive to help Mom take care of Dad. From early on, however, their scenes together carry echoes of years of familial conflict; there are microtensions in the air, and an outburst at the dinner table makes it clear Virginia is upset and preoccupied about something. As the situation takes turns for the increasingly worse, Louise and Michael discover that what hangs over the house is more malevolent than Mom’s simple grief over her dying husband, and that it threatens to consume them all.

With THE DARK AND THE WICKED, Bertino has crafted a study of evil preying on human fragility that feels timeless; were it not for the occasional sights of smartphones and an SUV, it could take place in any decade. He elicits a quietly ominous mood from the beginning that is also punctuated early on by a sudden act of gruesomeness, and throughout, that quiet chill is shot through with startling visions. The now-you-see-it, now-you-don’t tricks are tried-and-true but still work in Bertino’s hands, though the true horror lies the way his plotting inexorably undercuts the safety nets we all traditionally rely upon, from family bonds to religion. (CANDYMAN’s Xander Berkeley has an especially unnerving scene as a priest who may have done Virginia more harm than good, and also figures in one of the all-time great cinematic scary phone calls.) The more Louise and Michael find out about just what has been afflicting their parents, the more helpless their plight becomes, and the more anxious we in the audience become, equally helpless to stop it.

The three lead performances are terrific, with Ireland, Abbott and Oliver-Touchstone conveying both a long and fraught shared history and individual tensions and weaknesses. The briefly seen supporting players (including young Ella Ballentine from Bertino’s standout creature feature THE MONSTER) provide essential and effective pieces of the supernatural puzzle trapping the Strakers. Also helping this modestly scaled production deliver big-time shivers are cinematographer Tristan Nyby, capturing stark, oppressive atmosphere, and Tom Schraeder, who created the mournful, increasingly discordant score. THE DARK AND THE WICKED is a standout discovery at this year’s Fantasia, and takes an immutable place amongst 2020’s most frightening films.