It all starts so innocently. Eve (Lucie Debay) is on location supervising a construction project, though things are quite going as planned. Rather than spend the night stressing in her hotel room, she walks to a club for a few drinks and to let off some steam. After a man comes to her “rescue” from another creep at the bar, they move to dancing and then outside for a quick hookup. Or, at least that seems to be what Eve thought the plan was.

The man, with his accomplice, takes their night quickly from a fun flirtation to every woman’s nightmare. In no time Eve is tied up, bloodied, and in the trunk of their car which is racing to who knows where. The man is a skilled manipulator, and it is not initially apparent how deep his evil goes. After a freak car crash leaves the accomplice badly injured and ejects Eve from the car in the middle of the woods, the chase is now on for Eve to keep her life.

What follows could have strayed into an uninspired cat and mouse chase, but HUNTED is smarter than that, because Eve is smarter than that. When out in the woods she taps into either a primal instinct or perhaps previous experiences, and she is more than capable of survival. She may be easy to spot in the woods with her platinum hair and bright red jacket, but her skills far outweigh her appearance when it comes to staying safe in the forest.

“The tension is palatable, and the fear is real.”

That hooded red coat is no coincidence. Over the opening credits we are told a campfire story of a woman running with the wolves, planting the seeds for tethers to wolves and their prey. Eve may look just like Little Red Riding Hood, but her return to the forest and the power of nature fuels her. She sleeps nestled with a deer. She eats the fruit of the forest. This may be the domain of the wolf, but Eve’s connection to this space is far more powerful.

This is in direct contrast to the man as well. He spends the nights watching his snuff films on his phone, fighting nature rather than embracing it. When he comes across a huntress and her son in the woods, and further assumes the devious behaviour of the wolf, he cements his stance as the dangerous, but only fleetingly competent, wolf.

This is not to say that any of this is discussed within the text of HUNTED. The film itself is a chase of a bad man versus an undeserving woman. However the richness of their play within tales and lore can be sussed out and makes their hunts that much more satisfying. It also helps legitimise Eve’s strange behaviour, beyond that of a traumatized victim. She is a warrior of the forest. 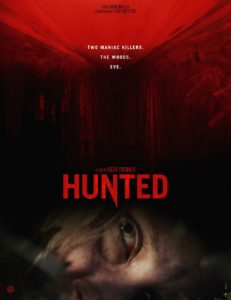 HUNTED sadly strays away from some of that power in the third act, but only briefly before reclaiming its original intentions. Eve is not always the most relatable heroine, but she is always fascinating. The man is predictable devious, but seeing his violent ways escalate is terrifying if not predictable.

Building this nearly mythical tale of survival on the back of a real world terror for women is another graceful turn by HUNTED. Not every woman fears the possibility of needing to get in touch with her primal self in order to outrun an evil man through an unknown forest, but nearly every woman fears meeting a man at a bar who turns out to be uninterested in taking no for an answer. Had this not escalated to the levels it did, the news covering Eve’s rape and death might have questioned why she was there, and implied she was at fault, as we have seem time and time again. The truth is that crafting this tale into an extreme example of what might have happened, while never straying into the fantastic or the absurd, shows how real the fear women carry every day is real, and does not necessitate a big bad wolf. The man here is a wolf in an asshole’s clothing.

The interplay of nature and civilization, lore and reality sculpt HUNTED into a beautifully rich world of wolf versus woman. The tension is palatable, and the fear is real.