The late Al Adamson is not as famous (or infamous) as some of his fellow B- (or Z-) moviemakers, but he certainly had one of the most varied filmographies, cranking out flicks in the horror, Western, biker and other genres from the 1960s through the ’80s. Along the way, he helped launch the careers of crewpeople/actors who went on to become directors themselves, such as Greydon Clark (WITHOUT WARNING) and John “Bud” Cardos (KINGDOM OF THE SPIDERS)—and, one could argue, indirectly paved the way for HALLOWEEN, since Debra Hill and Dean Cundey first met on Clark’s SATAN’S CHEERLEADERS. Adamson’s own flicks, the best-known in the fright field being DRACULA VS. FRANKENSTEIN and NURSE SHERRI, were cheerfully low-rent, and in some cases went through a few different incarnations and titles as footage was added and subtracted from them over the years.

Director/producer David Gregory, who previously chronicled the high-budget end of patchwork filmmaking in his ISLAND OF DR. MOREAU documentary LOST SOUL, charts that career in the highly entertaining and also sobering documentary BLOOD & FLESH: THE REEL LIFE & GHASTLY DEATH OF AL ADAMSON. A world premiere at the Fantasia International Film Festival, it reveals Adamson’s many productions and collaborators as more than worthy of a feature-length study. Yet there’s one sad facet that adds additional, unfortunate interest to his life: his death, in 1995, at the hands of his live-in contractor. Headlines at the time went the easy, exploitative route of proclaiming “Horror-film director meets horror-movie-like fate!”, but BLOOD & FLESH investigates both sides of Adamson’s story with equal thoroughness, letting us get to know him as a person and a filmmaker in a way that makes his murder seem even more of a tragedy. 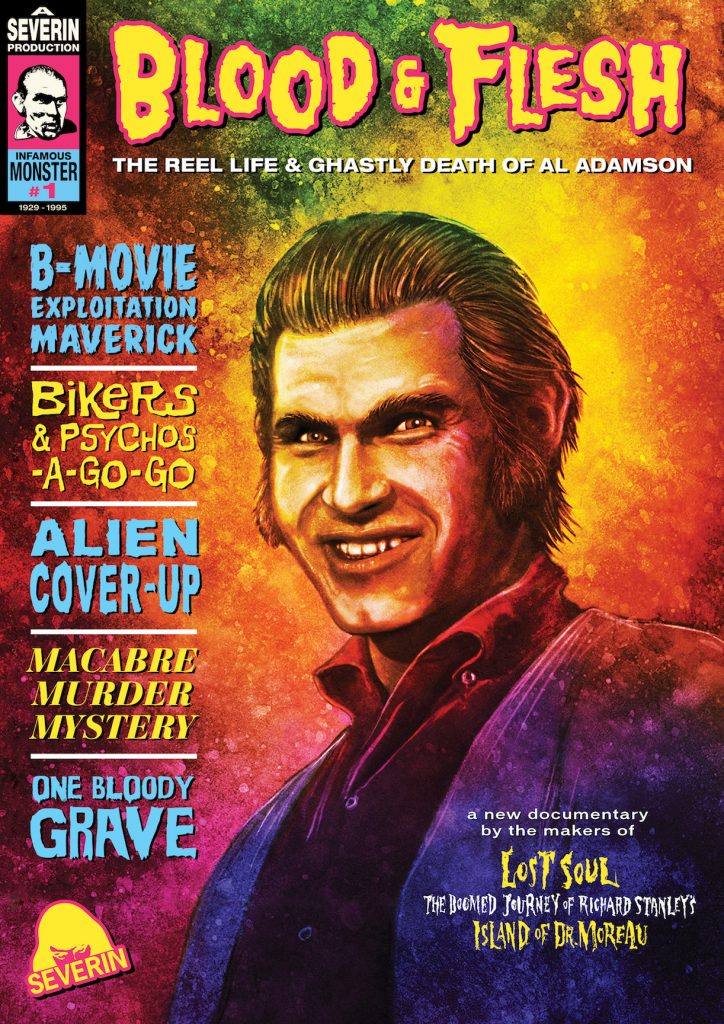 Having tracked down practically all the key players in both Adamson’s personal and professional life (along with one of the last on-camera interviews with the man himself) and the investigation into his slaying, Gregory and his team, including producer Heather Buckley, present a nuanced, detailed and sometimes hilarious portrait of a guy who didn’t let impoverished budgets get in the way of his desire to make movies. The son of silent-Western star Denver Dixon, Adamson was one of the many mavericks operating on the fringe of the film industry back in the pre-video days when even the cheesiest cheapies could score big-screen—usually drive-in—play. His longtime producing partner, Independent-International’s Samuel M. Sherman, along with Clark, Cardos, Adamson DP/Oscar-winning cinematographer Vilmos Zsigmond and many others look back on their time alongside Adamson with affection, humor and every so often a little annoyance at how little (or nothing) they made on those quickies.

There are oodles of great reminiscences about the transformations Adamson and Sherman’s films underwent—like DRACULA VS. FRANKENSTEIN, which started out as a mad-science chiller containing neither Dracula nor Frankenstein—as well as Adamson’s, let’s say, frugal methods. One of my favorite moments sees author David Konow relating an anecdote from cinematographer Gary Graver about a scene that took an unheard-of five takes, and how overjoyed Adamson was when it turned out there was no film in the camera. Even die-hard fans will likely be surprised by the odder avenues the director’s story takes, as when Charles Manson briefly enters the picture or we learn about Adamson’s later-in-life UFO/aliens documentary BEYOND THIS EARTH, which led him to run afoul of the government. The good cheer of the interviews gives way to a more sinister mood as a few of Adamson’s survivors are reluctant to discuss this particular project.

That proves to be an appropriate segue to BLOOD & FLESH’s darker half, as Adamson disappears, his absence not reported to the police for weeks due to his itinerant nature. The investigation leading to the literal unearthing of the filmmaker’s remains is gripping in the manner of the best true-crime docs, and additionally affecting since we’ve seen so much of his life and gotten to know so many of his friends and loved ones. We witness a remarkable amount of evidence/procedural footage and meet plenty of the people who pursued leads and tracked his killer, though the most affecting figure in this section is Adamson’s housekeeper, Guadalupe Garcia, who puts a heartbreaking human face on the whole sordid business.

As the films of, say, Ed Wood have come back into the spotlight in the decades since their releases, they’ve been reassessed in terms of what they say about their creators. Adamson’s output doesn’t encourage the same examination of the relationship between art and artist, yet in BLOOD & FLESH, his methods and experiences provide a wealth of entertainment, and his unfortunate end, unconnected (despite what those sensationalist headlines strove to suggest) to his film work, makes for moving drama as well.