PUPPET MASTER: THE LITTLEST REICH, which had its Canadian premiere at Fantasia and sees limited theatrical/VOD/digital HD release August 17, is a sort of spiritual reboot of the long-in-the-tooth film series. It could be construed as a sequel, but it’s also a stand-alone entry that seems aimed toward being the seed from which another dozen follow-up movies could bloom. On one hand, it’s dumb, gory fun with familiar little baddies; on the other hand, using the vernacular of the now, it’s “problematic.”

I know, I know: I can already hear the refrains of “Man, I remember when we used to be able to watch evil puppets slaughtering people without having some SJW ruin it for us!” And while some may yearn for simpler (perhaps stupider) days, it’s impossible to ignore that this film has all the ingredients required to make a Daily Stormer Top 10 list. As opposed to the original PUPPET MASTER series, in which the titular character Andre Toulon and his puppets fought against the Nazis, inexplicably, this time around both Toulon and the puppets are Nazis! 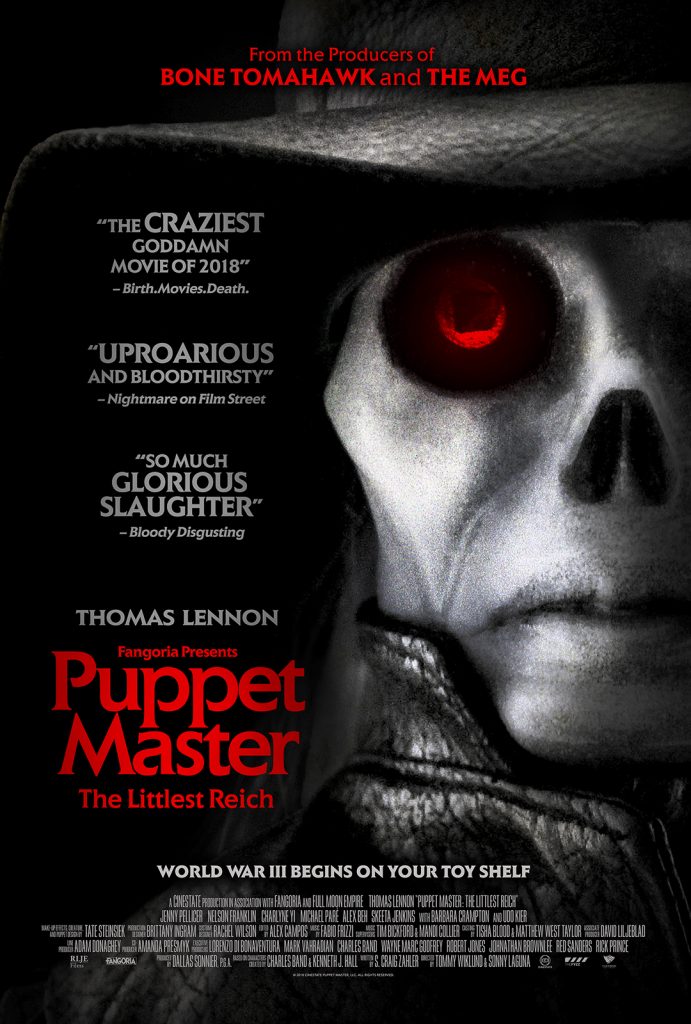 Of course, it’s a time-honored tradition to make the bad guys Hitler’s homies, but here, the puppets are the stars—they’re the ones you tend to root for. Couple this with the explicitly racist motivations of the killer toys, whose victims fall almost exclusively into marginalized groups (African-American, Jewish, LGBTQ, etc.), and the viewer is left with an unavoidably unsavory feeling that the film is inviting us to cheer as black babies are ripped from their mothers’ bellies, swarthy immigrants are beheaded and twink gays are gutted. Horror has always had a tradition of flexing boundaries, even if all they’re testing is the edges of good taste, but this isn’t that. It feels less like expert provocation and more like your iffy uncle trying to get away with a racist story by passing it off as something they heard on the news.

That said, it must be acknowledged that from a fan-service perspective, THE LITTLEST REICH is one of the better entries in the franchise. Udo Kier as Toulon serves Third Reich verisimilitude, Barbara Crampton (as a cop turned tour guide) is always fun to see on screen and the cast in general all turn in likable and funny performances. On the craft side, Tate Steinsiek’s gore effects are superbly crafted and inventive (the toilet decapitation being a particular crowd-pleaser) and Fabio Frizzi’s score is odd and amazing. All their contributions add up to a tight 86-minute package that would have you wanting more—if the overall effect wasn’t so morally loathsome.