Fantasia ’18 Review: “CHUCK STEEL: NIGHT OF THE TRAMPIRES” is an ’80s-homaging, puppet-splattering blast

Just when you thought it wasn’t safe to be politically incorrect, along comes CHUCK STEEL: NIGHT OF THE TRAMPIRES to blast huge holes in any and all notions of good taste, and make you crack up big time along the way. It’s both gloriously rude and cleverly genre-savvy, put across with such unabashed glee that it’s hard to remain offended by it for very long.

A North American premiere at Montreal’s current Fantasia International Film Festival, CHUCK STEEL is an extravagant puppet-animation feature written and directed by Mike Mort, who previously did award-winning work in children’s TV before making a decided turn away from that world with the 2013 short RAGING BALLS OF STEEL JUSTICE. That minimovie introduced Chuck Steel, a bad-ass/rogue/maverick/take-no-prisoners L.A. cop in the glorious tradition of 1980s action flicks. NIGHT OF THE TRAMPIRES, which is set in ’86, opens with 20 minutes or so of dead-on parody of LETHAL WEAPON/Cannon Films-style cinema, hilarious sight gags and riproaring action, establishing Steel (who’s been on the edge ever since tragically losing his wife) and his world. It’s the kind of insanely entertaining first act that makes you wonder whether the rest of the film can keep up its crazed momentum, and though there are lulls in what follows, Mort (who also voiced Steel and a number of the other characters) does a damn good job of keeping the laughs and over-the-top mayhem coming. 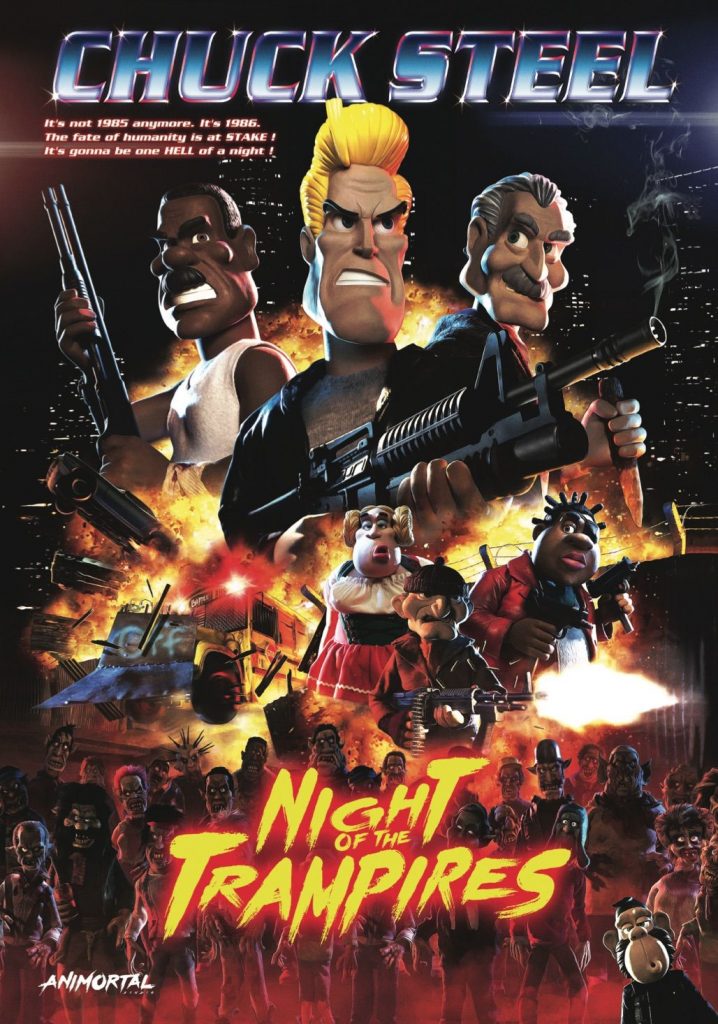 The plot, of which the movie has just enough to support all the insanity, has to do with an invasion of “trampires”—alcohol-fueled creatures of the night who attack the inebriated, and are part of a conspiracy that threatens all of humanity. Steel takes on these fiends with an endless supply of weapons, a bad attitude and the help of Abraham Van Rental, an elderly veteran of the undead wars. Meanwhile, back at the precinct, Steel has to deal with his perpetually angry captain, Jack Schitt (a name out of which the film gets more comic mileage than you might expect) and the efforts of police shrink Dr. Alex Cular (Jennifer Saunders) to get the rest of his fellow cops in touch with their sensitive—i.e. feminine—sides.

The latter tangent results in the humorous bits most likely to rub certain viewers the wrong way, though NIGHT OF THE TRAMPIRES equally targets machismo along with practically everything else. Mort and his animators throw everything they can think of against the wall, and a lot of it sticks—literally, when it comes to the copious stop-motion gore that spews when the trampires get angry and/or hungry. There’s the expected quotient of bodily-function humor as well, along with profane/sex jokes of every persuasion, though one of the joys of CHUCK STEEL is that while the vibe may frequently be low-rent, the production values are first-rate. Mort, who did a stint at Aardman Animations on the SHAUN THE SHEEP series, brought on board some key talent from that stable: Cinematographer Laura Howie worked on SHAUN and THE PIRATES! BAND OF MISFITS, and production designer Phil Lewis previously served that function on CHICKEN RUN and WALLACE & GROMIT: THE CURSE OF THE WERE-RABBIT. They give NIGHT OF THE TRAMPIRES a big, bold look pocked with plenty of absurd details, climaxing with a giant-monster fight that will thrill anyone who grew up on Ray Harryhausen epics.

The sonic icing on this explosive layer cake is the score by Joris de Man (whose name sounds like the kind of pun this film happily employs), a veteran of video games like KILLZONE. He perfectly blends exaggerated heroic action cues with period-perfect synth tones, augmented by a prime selection of vintage hair-metal songs. Choices like that make CHUCK STEEL: NIGHT OF THE TRAMPIRES a particular treat for viewers who spent their youths taking in Mort’s vintage influences, yet it has more than enough brash energy and vulgar imagination to amuse anyone who likes their movies unabashedly over-the-top.