Fantasia ’18 Review: A long, slow trip around the world with “THE FIELD GUIDE TO EVIL”

THE FIELD GUIDE TO EVIL, which made its Canadian premiere at the Fantasia International Film Festival, is an intriguing concept for a horror anthology that misses the mark through surprising homogeneity. The lure is that it explores dark folklore from around the world by having modern horror filmmakers translate myths and fairy tales from their home countries. I’ll admit I was extremely excited to see FIELD GUIDE TO EVIL, but both myself and the Fantasia crowd I saw it with ended up being perplexed and a little bored.

The premise promises wildly varying stories from different cultures, but nearly every myth explored originates in Europe, with two deviations from American and India. This leads to a certain sameness to the entries that gives FIELD GUIDE an unanticipated blandness. Literally every entry is set in some version of a demonically enchanted forest/mountain/cave, and the evil entity is frequently a witch-like character. There are variations at the detail level, but zoomed out, there just isn’t enough variety to support a nearly two-hour running time across eight different shorts. 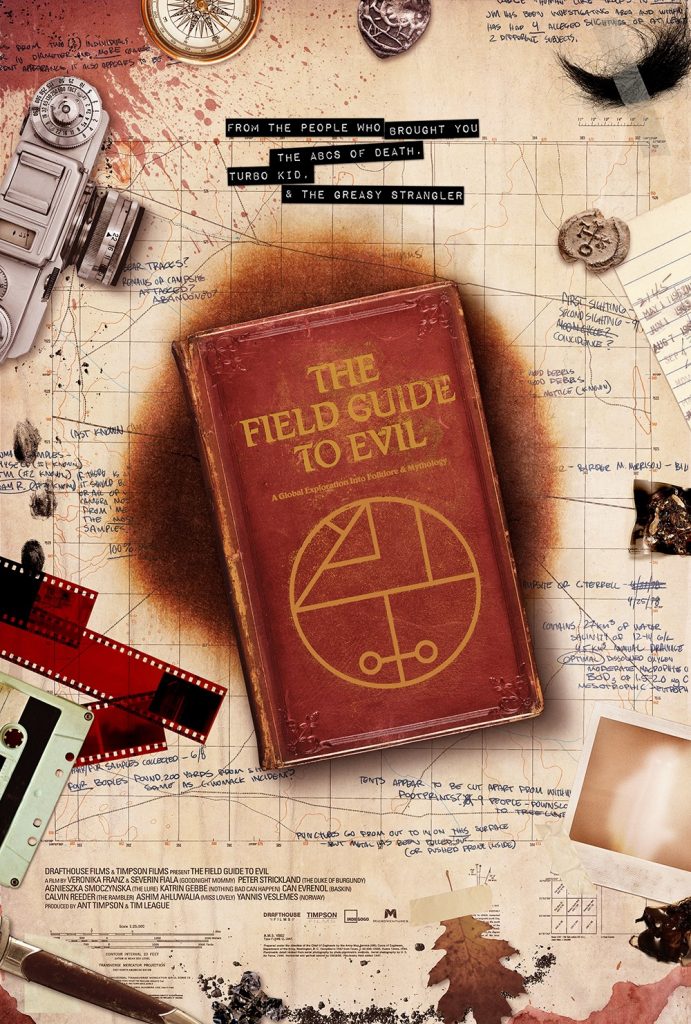 In Severin Fiala and Veronika Franz’s “The Sinful Women of Hollfall,” we’re introduced to two young women who befriend each other at the moment of their sexual awakening. This segment expertly captures the medieval fairy-tale setting: babbling brooks, moss-covered trails and stone huts. Adolescent sexual fumblings are rarely rewarded in horror, however, and in this instance, a genuinely terrifying demon called the Trud is summoned by one young woman’s guilt. The next entry, Can Evrenol’s “Haunted by Al Karisi, The Childbirth Djinn,” switches to a modern setting as a tragically young expectant mother cares after her own bedridden and near-paralyzed mom. After she gives birth, everything changes and caregiving to the old ends up competing with looking after her own child, leading to the appearance of a shadowy djinn who has her own twisted ideas about how to best raise a baby.

We then switch back to a period piece with Agnieszka Smoczynska’s “The Kindler and the Virgin,” which begins with the first title character being visited by a temptress who tells him he will become all-powerful if he consumes three hearts of the recently deceased. Cue grave-robbing and demonic double-crossing. Modern America is the setting for the most mystifying entry, Calvin Reeder’s “Beware the Melonheads,” which digs into much more modern folklore concerning hydrocephalic children haunting the woods of Michigan, Ohio and Connecticut. On its own, this could be an intriguing story, but in the context of the rest of FIELD GUIDE, it feels totally out of place.

Next up is one of the stranger and more genuinely original stories. In Yannis Veslemes’ “Whatever Happened to Panagas the Pagan?”, a Christmas feast is interrupted by a goblin interloper that ends up providing the holy revelers with more than just spiritual sustenance. While I’d like to provide a synopsis of “Palace of Horrors” from Indian director Ashim Ahluwalia, I must admit to a professional dereliction of duty in that I nodded off. All I can tell you it is in black and white. Sorry!

I awoke to Katrin Gebbe’s “A Nocturnal Breath,” in which a rat bastard of a mouse crawls into the mouth of a mountain-dwelling shepherd’s sister, leeching her of her goodness and innocence and forcing her sibling to make an awful choice between his fidelity and his humanity. Luckily, the final installment, the silent-film-styled “The Cobblers’ Lot,” is the best of the bunch a reminder of what THE FIELD GUIDE TO EVIL could have been. Peter Strickland directs two Quay Brothers-esque shoemakers who fall for the same princess and betray each other to win her affections. The gaudy and gauzy visuals are reminiscent of Guy Maddin’s TWILIGHT OF THE ICE NYMPHS, and enjoyable enough to warrant seeking out the entire film just for this one entry.

If Fantasia teaches filmgoers anything, it’s that there is a treasure trove of incredibly talented horror filmmakers representing every continent and country in the world. The core idea behind THE FIELD GUIDE TO EVIL remains a tantalizing proposition, so here’s hoping enough people see and like it to warrant a sequel that ventures farther afield and in more interesting directions than this maiden voyage does.