What a strange and beguiling movie is THE MASTER CLEANSE, which quietly refuses to take the easy or expected path. An international premiere at Montreal’s Fantasia festival, it adopts a personal approach to material that could have been milked for easy gross-outs, and is all the better for it.

THE BIG BANG THEORY’s Johnny Galecki (who believed in the project so much that he signed on as a producer in its early going) is very good and sympathetic as Paul, who’s been jilted by his fiancée and fired from his job, and is thus seriously due for a life change. Lured by a TV commercial and website promising a cleanse that can make him a new man, Paul is a bit reticent to go through with it until he discovers that attractive if troubled wannabe actress Maggie (Anna Friel) will also be part of the group. Upon arriving at a handful of cabins deep in the woods, the duo meet young couple Eric (Kyle Gallner from A HAUNTING IN CONNECTICUT and the NIGHTMARE ON ELM STREET remake) and Laurie (Diana Bang), and then their host, Lily (Anjelica Huston), who outlines the program and gives each of them four jars of individually prepared and unappetizingly colored liquids to drink. 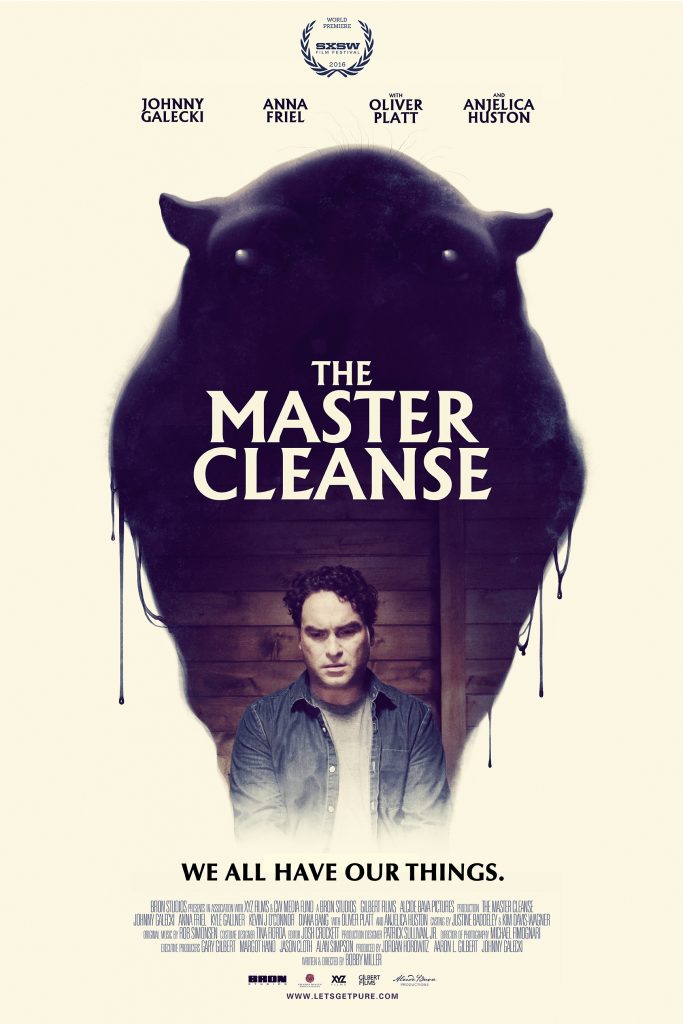 From here, writer/director Bobby Miller eschews the easy ick factor of what the cleanse does to the subjects’ digestive systems. Paul does get sick from it, but his purging is handled with restraint, and the story’s point is what results from it. Those details should not be revealed here, but due must be given to Nicholas Podbrey and Werner Pretorius’ standout makeup effects. Their verisimilitude, and that of the people reacting to them, becomes crucial to the developments that follow; it’s appropriate that Fantasia’s presentation of the celebratory documentary CREATURE DESIGNERS: THE FRANKENSTEIN COMPLEX, and special guest Guillermo del Toro’s comments at an accompanying Q&A extolling the value of such practical work, should be quickly followed by a movie that’s a perfect Exhibit A.

Once this element is introduced, THE MASTER CLEANSE and Miller continue to forge a unique path. The filmmaker takes his characters and their anxieties seriously, and has something much more interesting in mind than a straightforward genre piece. He explores what happens when people have a chance to literally unburden themselves of their baggage, and his cast (also including Kevin J. O’Connor as the retreat’s caretaker, who’s going through an especially extreme cleanse of his own, and Oliver Platt as the program’s guru) commits fully to the scenario, taking their roles seriously even as they’re led into bizarre places. Lest this sound like some kind of soul-searching downer, Miller laces in plenty of humor that helps keep the proceedings relatable, and the audience on the protagonists’ side.

Given the right muted but sharp look by busy genre cinematographer Michael Fimognari (who also has ABATTOIR and BEFORE I WAKE in Fantasia), and emotionally scored by Rob Simonsen, Russ Howard III and Brendan Angelides, THE MASTER CLEANSE announces Miller as a real talent to watch. It would be easy to look at the basics of his feature debut (after a number of shorts, including the Fantasia fave TUB) and make simple comparisons to past body-horror specialists, but its specifics make it clear he’s got a point of view all his own.