While awaiting the release of his Lovecraftian THE DEEP ONES (pictured), filmmaker Chad Ferrin is already preparing to shoot his next movie, NIGHT CALLER, and gave us the scoop on the details and first looks at the poster and some storyboards. We also have words from some of his collaborators.

“This is the first time that I’ll be making a film while my previous one is opening in theaters,” Ferrin tells us; THE DEEP ONES, which we last reported on here, opens first April 23 at Los Angeles’ Laemmle Noho 7 and then goes across the country April 30 (U.S./Canadian fans who would like the movie to play at their local theaters can contact distributor 123 GO Films at info@123gofilms.com). “Dario Argento’s DEEP RED and William Lustig’s MANIAC run through the veins of NIGHT CALLER, which I had written shortly after directing EXORCISM AT 60,000 FEET. It floated around, got optioned and then sat for six months. The production company failed to make it, so the rights returned to me around when I had sold THE DEEP ONES. I sent it to [DEEP ONES co-star] Robert Miano, he dug it and started pulling in investors, and here we are gearing up to start shooting. We’ll wrap at the end of April, submit to fests by early June and hopefully have it sold by October. I’m really excited about this one; it has a great energy to it.”

The NIGHT CALLER synopsis: “Telephone psychic Clementine Carter is pulled into a complex web of mystery when she receives a call from a serial killer. Predicting his murders before he commits them puts her into a terrifying game of cat and mouse. Enlisting the aid of her invalid father and clairvoyant co-worker, they must use their unique abilities to stay one step ahead of a maniac whose unspeakable acts in the present are nothing compared to his past and future.”

In addition to Miano, the cast includes Susan Priver, Steve Railsback (HELTER SKELTER, LIFEFORCE) Steve Railsback, Bai Ling, Lew Temple (THE DEVIL’S REJECTS), Christine Nguyen and THE DEEP ONES’ Silvia Spross, Kelli Maroney (NIGHT OF THE COMET) and Timothy Muskatell, Robert “Corpsy” Rhine, who’s also an executive producer with his Girls and Corpses Films. “Chad is an inventive director who isn’t afraid to take chances to achieve his powerful vision,” Rhine says. “I believe NIGHT CALLER will be his best yet, especially with veteran actor Steve Railsback starring. It’s going to be a gory blast!”

Priver, who plays Clementine, is also excited to work with Railsback, and by her role. “I hope to bring to Chad Ferrin’s twisted, dark and sometimes hilarious script the sense of mysticism that Kim Stanley brought so famously to SÉANCE ON A WET AFTERNOON,” she says. “It’s been a while since I’ve taken a trip to the dark side–more than a year since I played Blanche in A STREETCAR NAMED DESIRE…and funnily enough, I was labeled by Variety as “a homicidal Blanche DuBois” for my role as a suburban cannibal in THE GUEST ROOM, a.k.a. SERVING UP RICHARD.”

“I just can’t resist a paranormal psychic thriller,” says Maroney. “It’s wonderful to be back working with Chad Ferrin, Robert Miano, Robert Rhine, Silvia Spross and Bai Ling. It’s almost like we’ve become a John Ford stock company. That’s how we all pictured making films as kids, isn’t it? ‘Let’s get all our friends together and make a movie!’ We are actually doing that, and I love it.”

Nenad Gucunia created the poster seen below, and the storyboards were drawn by Scott Vogel, a regular Ferrin contributor. “NIGHT CALLER strikes me as more visually detailed than his other projects,” Vogel says. There’s just a lot of visual cues necessary to tell it, and they’re well-articulated within the story.” We’ll bring you updates on NIGHT CALLER as they come in! 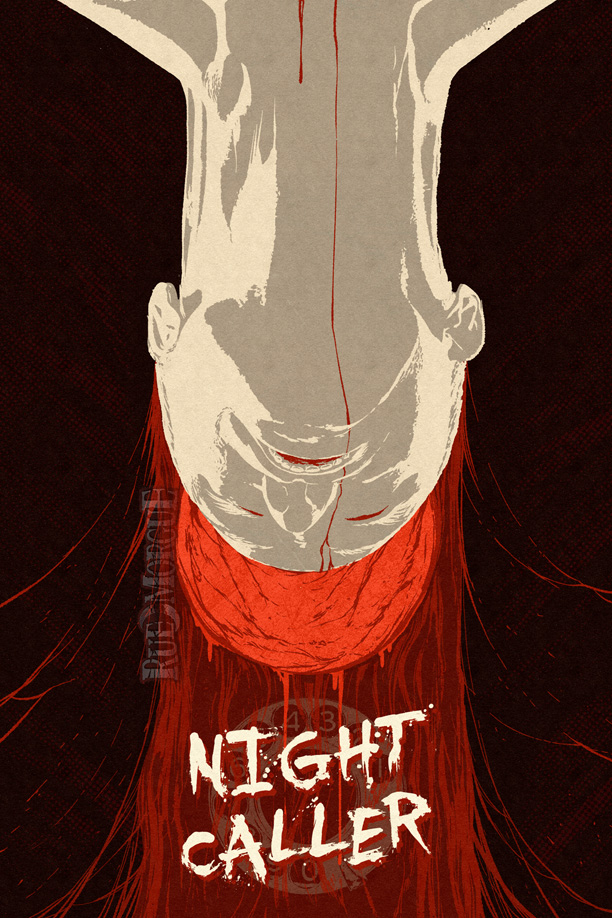 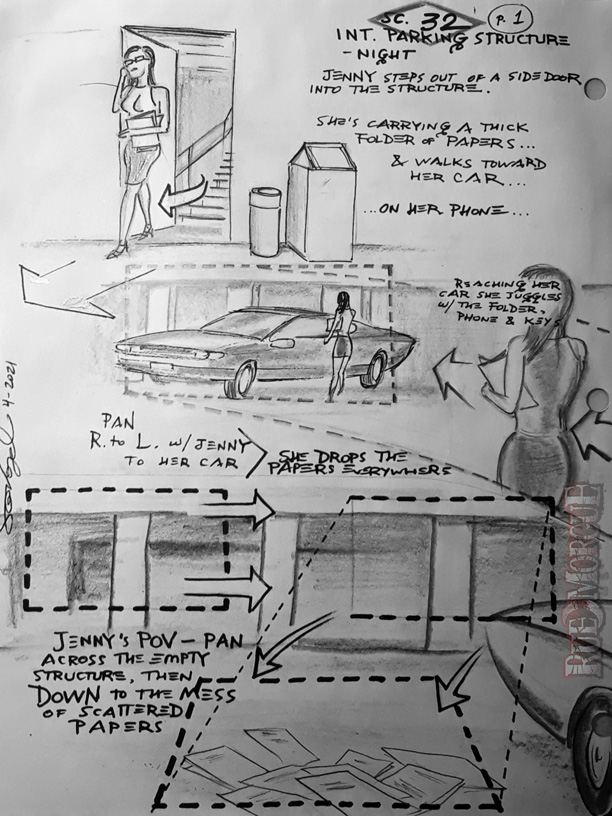 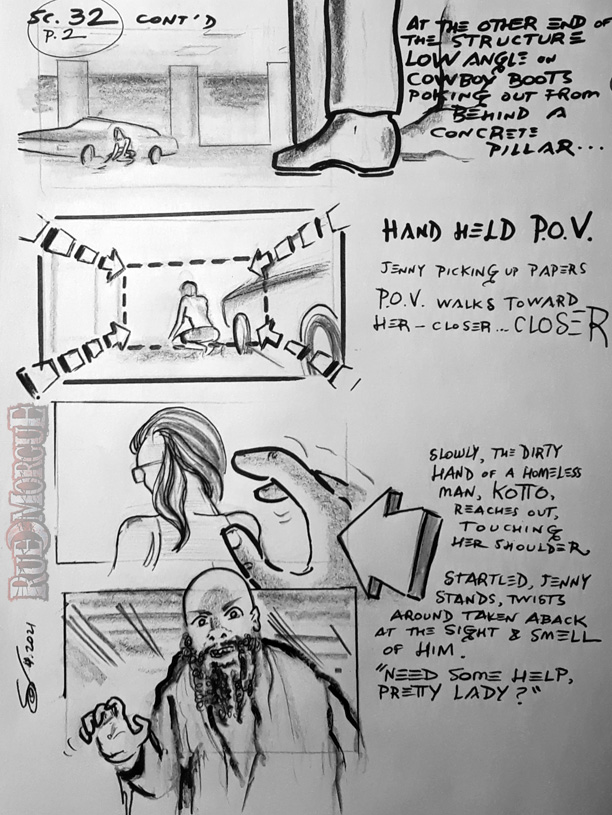 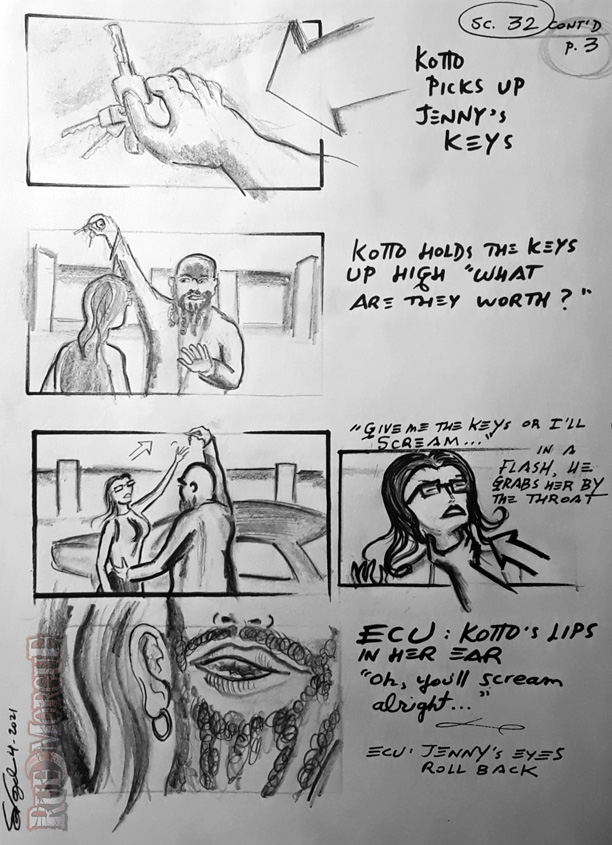 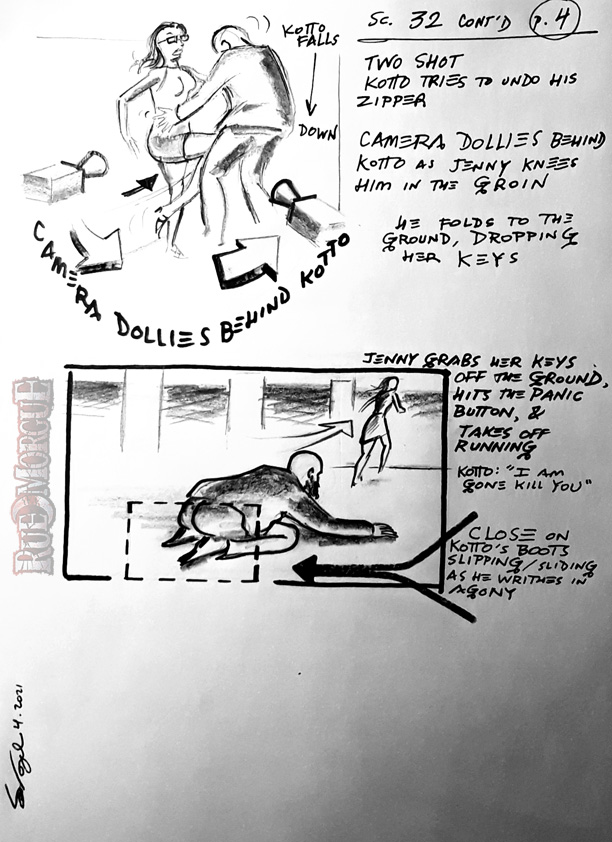