Exclusive new poster for “THE BREACH” takes aim at you

The Lovecraftian frightfest is continuing its festival tour.

We got the first look at the latest poster for THE BREACH, the second feature directed by RUE MORGUE veteran Rodrigo Gudiño. It was scripted by Ian Weir and Craig Davidson, based on the Audible original novel by Nick Cutter; Slash of Guns N’ Roses was an executive producer and provided the music. Allan Hawco, Emily Alatalo, Natalie Brown, Mary Antonini, Wesley French, Adam Kenneth Wilson and Alex Lifeson star; the synopsis: Shortly before he leaves for the big city, Police Chief John Hawkins [Hawco] is called upon for a strange affair. A body with disturbing wounds was discovered on a boat on the Porcupine River. This is a life-changing discovery for the small town of Lone Crow and a job for local coroner Jacob Redgrave [French]. While they suspect that the body belongs to a missing physicist, Dr. Cole Parsons [Wilson], Hawkins is forced to reconnect with his ex, Meg Fulbright [Alatalo], the city’s charter boat captain, who knows the waterways like the back of her hand. She leads Hawkins and Redgrave to the house rented by Parson, where he was conducting secret searches in the woods. When they arrive, they find a dilapidated house, with indescribable heaviness and a strange machine in the attic. The disappearance of Parson’s daughter as well as a visit from his grieving wife, Linda [Brown], make the investigation even more mysterious and the secrets revealed push everyone to the brink of danger.

THE BREACH world-premiered at the Fantasia International Film Festival this past summer and next has its Toronto premiere at Blood in the Snow on Saturday, November 26. Creepy Duck Design created the poster. 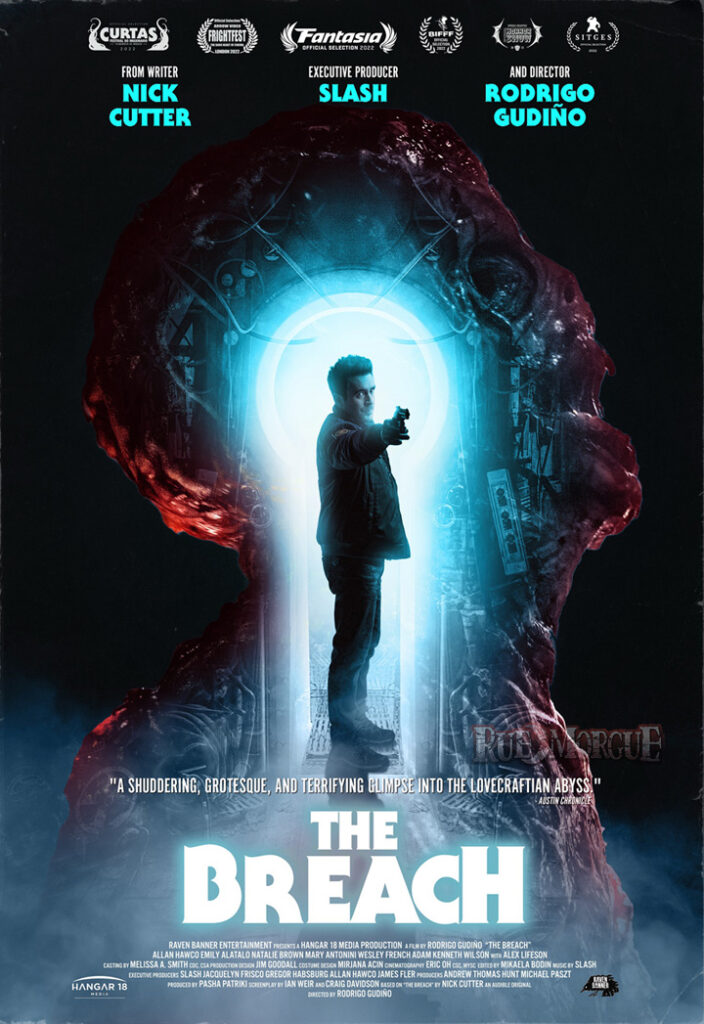