UNSANE, the Steven Soderbergh psychothriller that opened Friday, features as its villain Joshua Leonard, whose horror résumé stretches back to his big-screen debut in the 1999 trendsetter THE BLAIR WITCH PROJECT. We got a few words with the actor contrasting the two movies, and his first words on his next fright feature, Larry Fessenden’s DEPRAVED.

In UNSANE, Leonard plays a stalker who appears to be working as a meds-dispensing orderly in a mental institution where heroine Claire Foy has been committed against her will; see our review here. Like the bulk of BLAIR WITCH, UNSANE was shot digitally—on an iPhone 7. However, Leonard notes, “There are as many differences as there are similarities between BLAIR WITCH and UNSANE,” starting with the fact that whereas the former was improvised, the latter was fully scripted (by Jonathan Bernstein and James Greer). “BLAIR WITCH always felt like a bunch of teenage kids getting together in their mom’s garage and making a punk album. I believe that’s part of the reason the film worked; we were figuring out everything as we went. It’s a very different experience making a movie with Steven Soderbergh—not only because it’s scripted, but you’re working with somebody who’s a master of his craft, with a specificity of vision that I can’t even aspire to having in my lifetime. 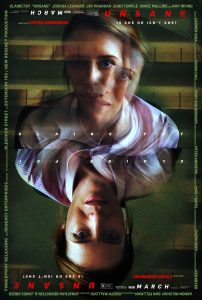 “The other big difference was technological,” he continues. “At the time we made BLAIR WITCH, the digital equipment was in such infancy that part of the conceit of the movie had to be: OK, it’s going to look like shit, but it’s going to look that way because these characters are student filmmakers who bought their camera for 300 bucks at Walmart.”

Leonard just wrapped a project with another well-established auteur: DEPRAVED, the variation on the Frankenstein legend written and directed by Larry Fessenden (see first details here). The film also stars David Call as Henry, a former military surgeon who makes a monster (Alex Breaux) in a Brooklyn lab with the help of Leonard’s character. “I play a guy named John Polidori [after the British writer who penned “The Vampyre” during the same Swiss getaway where Mary Shelley wrote FRANKENSTEIN]. It’s interesting, because I just realized that in DEPRAVED, I’m playing a guy who works in the pharmaceutical field, and not a great guy. So it’s another role with the pharmaceutical industry being a backdrop bogeyman for the story, which is an interesting parallel with UNSANE.

“I play college best friends with Henry,” Leonard continues, “who’s really the brains behind the Frankenstein operation. He’s not called Frankenstein in our film, but that’s the riff, and together we come up with a way to ostensibly keep soldiers alive on the battlefield using his skills and my medical technology. So our monster in this movie is a bit of a proof of concept for what could be a medical breakthrough. That’s our way in.”