When writer/director Ti West’s X premiered earlier this year at SXSW, West and A24 surprised the crowd by tacking on a trailer for the already-lensed prequel PEARL. For all those impressed by Mia Goth’s double performance in X as both the ambitious Maxine and–under heavy prosthetics–the elderly, homicidal Pearl, it promised another welcome showcase for Goth’s talents, and the film (reviewed here) definitely delivers.

It’s also a stylistic 180 from the rough ’70s aesthetic of X, telling the 1918-set story of the young Pearl, a dreamer who yearns to escape her small-town life and make it in Hollywood…and would literally kill to achieve her goals. RUE MORGUE spoke to West about making this distinctive follow-up film–just before the announcement that he and Goth will reteam once more for the 1985-set MAXXXINE.

At what point during the creation of X did you realize you wanted to do a prequel?

Prior to making X. We were going to New Zealand to shoot it, and at the time, New Zealand did not have any COVID, and it was a safe place to make a movie. We all had visas and were about to spend a lot of money building all these sets, the barn and the boarding house and all that, and we had a great crew, and to me, to go down there and do all that, just to then tear everything down and go home, seemed wasteful and silly. It seemed like there was an opportunity to make two movies in a row, especially at a time when it seemed uncertain if we would ever make a movie again. That’s where it first came from, and from a production standpoint, the costs were very amortized, so it made sense as a line-budget thing, but it would only really make sense if the movie was good. I didn’t want to make a sequel to X, because I couldn’t just do more people showing up at the farm and getting killed; that would be quite boring.

So then I thought, well, if we’re going to use the same stuff, we could go backwards. Mia Goth and I had spent a lot of time talking about the Pearl character, who we only catch up with in her 80s in X, and we had been talking about what she was like when she was younger. That seemed like a good jumping-off point, so she and I started spitballing ideas. And then, during the two-week mandatory quarantine to get into New Zealand, the bulk of the scriptwriting happened, with the hope that when we got out of quarantine, we could show it to A24 and they would say, “Yeah, we should make two movies.” And miraculously, that’s what happened. 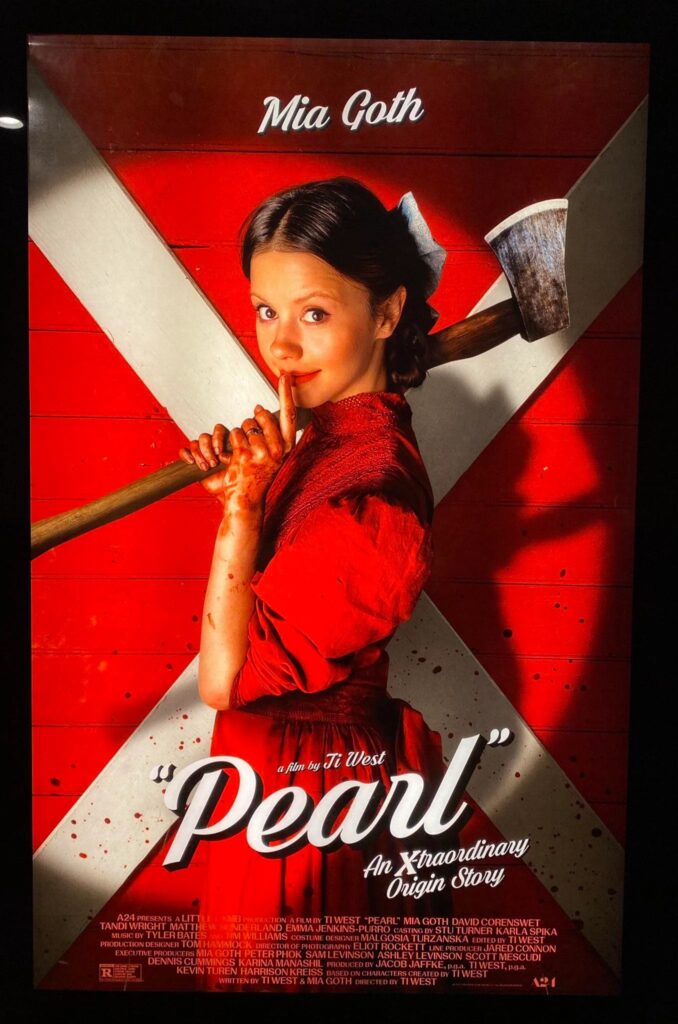 The challenge when making a prequel is that you’re building to a point where the audience already knows the ending, in a sense, so how did you get around that while conceiving and writing PEARL?

I think it was because the movie doesn’t take you right up to X. You know where Pearl is much later, but the story of PEARL has its own contained element. So if you’ve seen X, PEARL is enriched by that, and vice versa, but they’re stand-alone films and you don’t need to see [one to appreciate the other].

From the very beginning, did you want to make it so different stylistically from X? Was that style part of the initial inspiration?

Yes, I did. X is very informed by a kind of 1970s Americana/independent/auteurish exploitation filmmaking, and I wanted PEARL to reflect a very different kind of cinema. Initially, I thought of it being in 1918 and doing a black-and-white, almost German Expressionist kind of thing, and if you read the script, you could imagine that. That would have been the cheapest one, too, because we wouldn’t have had to paint anything. If it was bright red, who cares? It would look grey, it didn’t matter. So that would have been the most effective way to make the turnaround and do two movies in a row. But then we told A24 that the alternative was to do this very colorful, almost childlike Disney-esque film, and lean into the magic of the Golden Age of Hollywood. That appealed to them and excited them, and they didn’t care about saving the extra few bucks; they were like, let’s do what’s right for the film. I always just thought that doing it in this childlike-wonder way created an interesting contrast. It made something that was retro feel fresh again.

You’ve said that THE WIZARD OF OZ was a key reference, and it almost seems at certain moments that someone is about to burst out into song. Did you ever consider putting musical numbers in the movie?

Well, we did shoot more dancing. There’s about a day and a half of story that was filmed but got lifted out of the movie, because it just seemed to be better without it, but there was more dancing in some of those sequences.

How much time did you have to prepare PEARL, even as you had X going at the same time?

Technically, we had about three and a half or four weeks of prep. We wrapped X, let’s say, on a Friday, and then on Monday we were back in the office, and less than a month after that we were back on set. Since I knew we were doing it prior to making X, when we were prepping that, decisions were being made about PEARL. For some of the really difficult stuff, the wheels were already in motion during X, but the actual turnaround time to go from the 1970s to the 1910s was just under a month.

How difficult was it to find props, etc. from that period of America in the area of New Zealand where you were filming?

Shockingly easy! I mean, easy is the wrong word, because nothing is easy, but it was all there. I don’t know why it was all there, but it was there. A big part of the reason was likely Peter Jackson; he has one of the largest WWI collections, and there are a lot of car collectors down there as well, so the Model T’s–and left-hand drive ones–were actually pretty easy to find.

Did you ever consider giving any of the other actors from X roles of any size in PEARL?

I don’t think so; it was too loaded to do that. It would have carried too much weight. I would love to do that, generally speaking, and I loved that cast and I was sad for them to all go home, but it was almost too distracting. It would have been like, what are you saying with this? It would have weighed the movie down too much to do something like that.

I love Goth’s long monologue toward the end of PEARL; it reminded me of Rebecca Hall’s in RESURRECTION…

I haven’t seen that, but Rebecca Hall is great. We worked together on TALES FROM THE LOOP; I love her.

What was the conception and shooting of that monologue like?

The goal was always to have the climax of the movie be, ironically, just a close-up of someone’s face, and it’s all psychological. Most of that burden was on Mia’s shoulders, because she was the one who had to perform something so emotionally draining. From my side of the street, what was most stressful was, we filmed that scene in its entirety, from when they enter the room until they leave, and in the middle of that was this big, six-and-a-half-minute unbroken take. Right up until she said the first word that started that take, if there was anything wrong, that was the time to say something, because as soon as she said the word that triggered it into “We’re not cutting from here on out,” it was very stressful. It was like, don’t let a phone ring, don’t bump the camera, don’t have someone get distracted, don’t get an eyeline, because it was almost like doing a stunt or something, because we were very, very close in on her face, and if anything went wrong, the whole thing was dead. Sure, I could have shot it where I cut back and forth a million times, but that wasn’t what we were trying to do. So if anything was even suspiciously wrong beforehand, bail–and I don’t remember if we did or not. We shot the whole thing maybe six or seven times.

What was your favorite part of the release of X, and its reception by audiences?

It’s certainly nice when people like the movies you make [laughs], but the goal for me was to get people thinking about the craft of filmmaking, and to be enthusiastic about that, and that was the most satisfying thing to me. To see people excited about the way the movie was photographed, the way it was put together, the special effects makeup, the prosthetics, Mia’s performance, the music–people got it, you know? People don’t always get it, and you don’t always succeed in making something they all get, but it was one of those situations where I think people were ready for it, and they were happy for it, and that felt good, because we worked really hard on it.

How difficult was it keeping Goth’s dual role a secret, and was it fun trying to keep that hidden until the movie came out?

Yeah, and what was really fun was that people realized it at various times. Some people–the minority–realized it while watching the movie, and then the next group would realize it when the credits revealed the two roles at the end, and that was a great moment, to see everybody have that realization and get an extra “Whoa!” from the movie. And then there were a lot of people who didn’t even know it until someone else told them afterward. So that was really fun–not just as a trick that we pulled on them, but it was also a credit to Mia’s performance, and to the makeup effects that Sarah Rubano did, because most people didn’t know, and that was the goal.

For anyone who might not have seen X, would you suggest they see PEARL first, or do you think it helps to have seen X to appreciate what PEARL is all about?

I don’t think it matters. As I said, I think if you’ve seen X, it will enrich PEARL, and there are certainly a few jokes and references that will land deeper, but they’ll land all the same if you haven’t seen X. And I don’t know which order is better to see them in, frankly, because I’m going through this in real time just as everybody else is, you know? You could make an argument both ways as to which way would be better, like chronologically in order from the story standpoint, or from the way the movies were made. But that’s part of the fun of being able to do this, and the fun of A24 betting on these movies the way they did.