The evolution of the human body is the central theme of CRIMES OF THE FUTURE (now available to rent on VOD in Canada, with Blu-ray/DVD availability next Tuesday, August 9), David Cronenberg’s return to visceral fantasy-horror. Emblematic of that theme is Lang Dotrice (Scott Speedman), leader of a group of people who have modified their digestive systems to allow themselves to consume plastics. As the movie (reviewed here) opens, Lang’s young son demonstrates a natural ability to eat such materials–but his mother and Lang’s ex-wife kills him for it. That sets in motion a scenario encompassing Saul Tenser (Viggo Mortensen) and his partner Caprice (Léa Seydoux), who perform automated surgeries on Saul’s body as performance art; and Wippet (Don McKellar) and Timlin (Kristen Stewart), agents from the National Organ Registry. Speedman speaks with us below about his role, working with Cronenberg and more; you can read our interview with Mortensen and Seydoux here.

This is your first film with Cronenberg, but had you been following his work previously?

Yeah, to a certain degree, absolutely. Really, when you’re a kid growing up in Canada, and things like THE DEAD ZONE are on TV all the time, you consume those types of movies way too young. And then when I came into being an actor, I definitely started to watch more. People would show me THE FLY, obviously, and I saw Viggo’s movies, EASTERN PROMISES and A HISTORY OF VIOLENCE. They were very different, and I admired those movies and his performances. So I was really dying to work with David. I’m dying to work with anyone who’s at that level, so when CRIMES OF THE FUTURE came across my desk, I was super-excited. 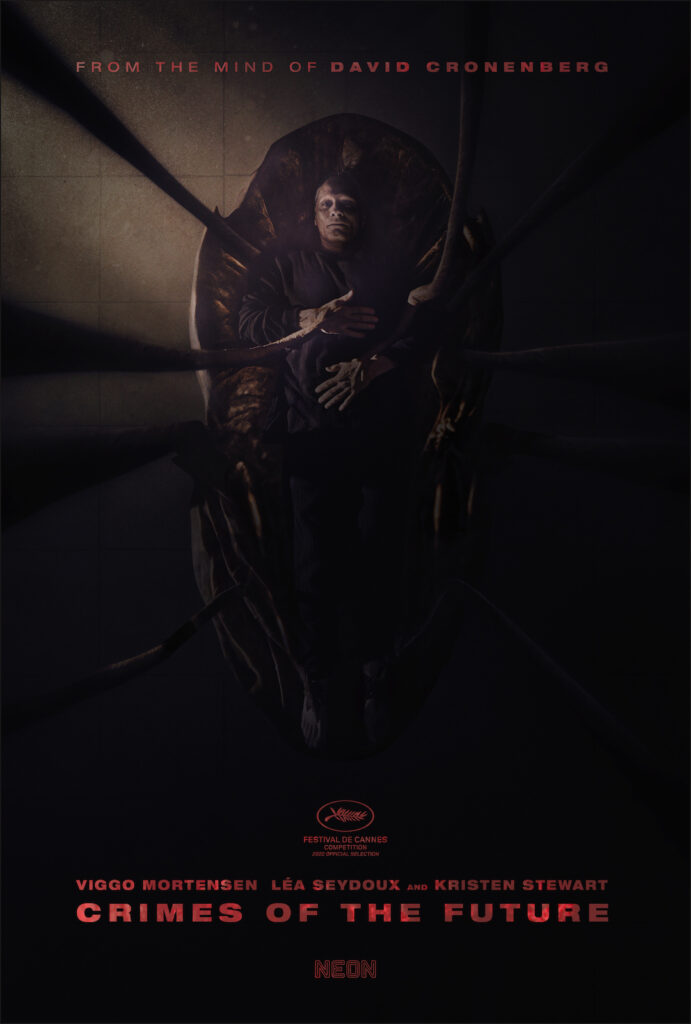 How did you respond to the script and the Lang Dotrice part when you first read them?

I was blown away by the role, first of all. I was really, really taken with it, and I was scared of it; he’s a very vulnerable character, a very explosive character, a very edgy character, and I knew it was going to be quite a journey to go on with him. But the more I started to work on it, I also saw a very fun part to play, so I was super-excited about that. And then the world David was creating, that’s what put me at ease. With another young director, a first-timer, I might not have been so confident that they would be able to pull off this world they were envisioning. But with David, I knew I was in good hands, and he would let me go to dive in there and do what I do.

It was a very surprising experience, working with David. He’s nothing like I imagined. I thought he was going to be this edgy auteur type, very controlling, and he wasn’t that way at all. He was very easygoing–one take, two takes, no storyboards, nothing like that. Just kind of came in and watched us rehearse, then he went and talked to the DP and the camera operator and they figured out how they were going to shoot it. It was very relaxed, which was surprising to me.

Are you a father yourself, and if so, how did that feed into the way you approached this role?

I actually had my first kid a month after I returned from the movie, so it was very interesting to think about, not even how I would have played it differently, but just what that would have done to me as a father. It would obviously have added certain elements to it. My girlfriend was in her third trimester while I was shooting this, so it was more about using my imagination about that kind of stuff. Now, of course, I have more instinctually within myself about what it is to have a child and what it would mean to lose them.

How was it shooting in Greece, in all those odd locations?

There were many highlights on this movie, and that was one of them. What was cool for David, not to speak for him, but this movie was written for Toronto in 1998, and thinking about it now, that would be very difficult to shoot, and it would have a completely different visual style, because in Greece you can just set up the camera and not have to change the graffiti or the dilapidated buildings or the way the ancient part of the city is crumbling. It added this texture and tone to the movie that was unforeseen. Toronto is a very young city, comparatively—a lot of condos and glass and so on—so it would be very tricky to shoot there in the same way, and get the same feel.

Your character isn’t as involved with the makeup effects and bizarre props as the other leads, so how much of those did you get to see and experience on the set?

A little bit, but very little, really, because a lot of that was CGI, and they did it after the fact, like the surgery apparatus. But I saw a fair amount; obviously, the Sarc unit was there, and the the mockup of the kid was there, and that was very helpful. But when you’re dealing with the CGI, you’re kind of jumping off a cliff and asking the director to make sure he has you, you know, and you’ll land in his arms. That was easy with David, again; that’s what’s great about working with one of those masters.

You obviously have experience with CG effects from the UNDERWORLD movies, so how did that play into how you approached this film?

Oh yeah, it was easier, because it was hard on UNDERWORLD! I had never done it before, and I remember it being quite challenging for me at that age and lack of experience. It was difficult to jump off the ledge on that one, and I had many more conversations about it with Len [Wiseman], the director. That was a long time ago, and I’ve come a long way since then in terms of being able to allow myself to just go for it.

The production notes say that no one really went off script on CRIMES OF THE FUTURE. How tightly controlled did Cronenberg keep his vision, and how much were you and your co-stars allowed to contribute?

That’s a good question, because we never really went off script–maybe a few things here and there. He’s not precious at all, so I don’t know why that was. I think there’s an improvised scene with Viggo and Kristen, and if anybody was going to improv, it was probably Viggo. He knows David so well, and knows where he can and can’t do that. But for me, it was a very specific script, and I wanted to adhere to it. I didn’t see a lot of place for improvisation. What’s great about David is, whatever’s working on that day, he’ll adjust for that. If it’s an actor who needs an adjustment, he’ll allow it, and then go from there. But he’ll also make cuts too, and then in the editorial process, that’s where I believe he really brings the scissors out and pares it down and pares it down.

Was there anything significant you did in the film that wound up getting cut from the final edit?

Only due to redundancy; it was a scene toward the end with more stuff about the Sarc unit and what it was. It was interesting, but David, and he’ll say this himself, is very scissor-happy that way. He says he’s the only director where producers are asking him to put stuff back in, to make it a little longer. That spare style is the way he likes it, and I didn’t miss anything too much from this movie, editorial-wise.

Can you talk about the relevance of CRIMES OF THE FUTURE to our current times?

Well, it’s just interesting that David wrote it so long ago; he did one draft 24 years ago, and that’s the one we shot. There were no adjustments made at all to that draft he did in 1998, which is wild to think about; it’s like, how is that possible? But that’s the kind of confident guy he is. And it is super-relevant, even the idea of plastics; he was very prescient to see where we were going, because of the microplastics issue we’re dealing with now, and testing our blood and all that kind of stuff, which really wasn’t a subject in 1998. He definitely saw some things about where we were going with technology, and is obviously a very intelligent man who sees things that other people don’t, and he likes to make art about it, and his art form is film. It’s wild to think about the fact that a lot of that stuff is happening right now.