Since he produced the horror anthology VOLUMES OF BLOOD a couple of years ago, P.J. Starks has been all over the indie genre scene, and he spoke with us exclusively about his varied upcoming slate, providing a few exclusive images as well. 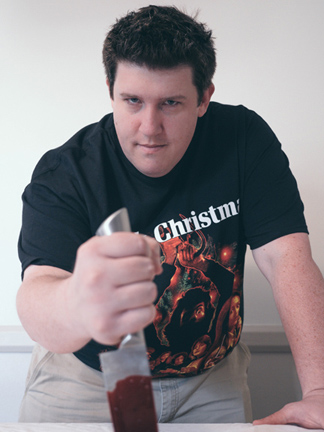 Starks (pictured at right) tells RUE MORGUE, “I’ve been very fortunate, not just as a horror producer, but as a horror fan in general. The creation of VOLUMES OF BLOOD opened a lot of doors for me to not only network with some of the indie scene’s most creative minds, but also to work with them on their visions. Especially over the last year, from CLOSE CALLS with Richard Stringham to BUTCHER THE BAKERS with Tyler Amm. It’s been a very surreal and exciting year, to say the least.”

Starks gave us the first look (see below) at the poster for one of his new projects, a horror/comedy short by Stephen Wolfe called DRACULA’S COFFIN. Intended as the precursor to a feature-length film, it sees Abe Van Helsing, a wayward descendant of the vampire-hunting family, hire a teenager to house-sit for him while he travels. Unfortunately, the teen is not prepared to handle the boxed corpse of Dracula that Van Helsing has in storage.

“I met Stephen back in 2016; he had reached out to me about directing a sequence if we ever made a third VOLUMES OF BLOOD,” Starks explains. “We became quick friends, and for the past couple of years have talked about working together. After he’d finished filming DRACULA’S COFFIN, he asked me to come on board to help in several areas as an executive producer, and I was excited to do so. Stephen is a solid talent and has made a very funny movie. It’s a great concept and has a few surprises I don’t think viewers will see coming, and that really attracted me to the film. It also has a character, a sort of pervy Peter Vincent [from FRIGHT NIGHT] type, that I believe will become an instant fan favorite. I couldn’t be more excited to add bloodsuckers to my filmography, and to collaborate with Stephen and see his vision come to fruition.” 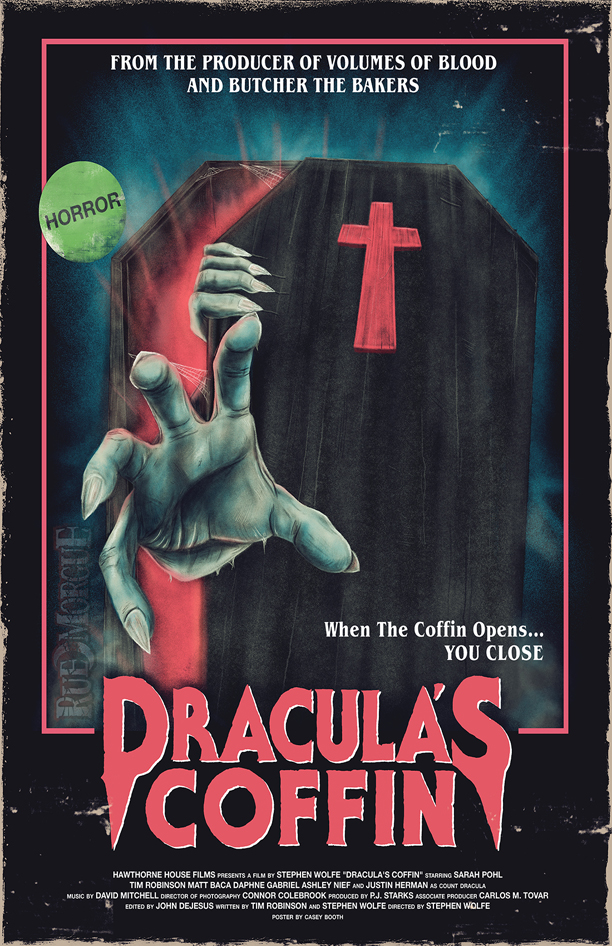 Starks has also jumped into the documentary arena as an executive producer and interviewee on Paul Downey’s FOR THE LOVE OF THE BOOGEYMAN: 40 YEARS OF HALLOWEEN. This UK production celebrates John Carpenter’s classic and its legacy via onscreen chats with independent genre filmmakers who were inspired by it, and is set for release in October. “I was insanely humbled when Paul asked me just to participate on camera,” Starks says. “Getting to talk shop about the holy grail of horror was very cool. I’m even more excited now that I’m on board as an executive producer. I was able to help Paul and his producing partner Dave Hastings find additional filmmakers for the retrospective, and I’m looking forward to helping them get the word out via marketing, festivals and such. I recently got a chance to check out the final edit, and it was awesome to see so many names from current indie horror come together in one place to talk about HALLOWEEN. There are at least 200 combined years’ worth of talent in this thing. Right now we’ve got our eyes set on a festival run to pick up reviews.” 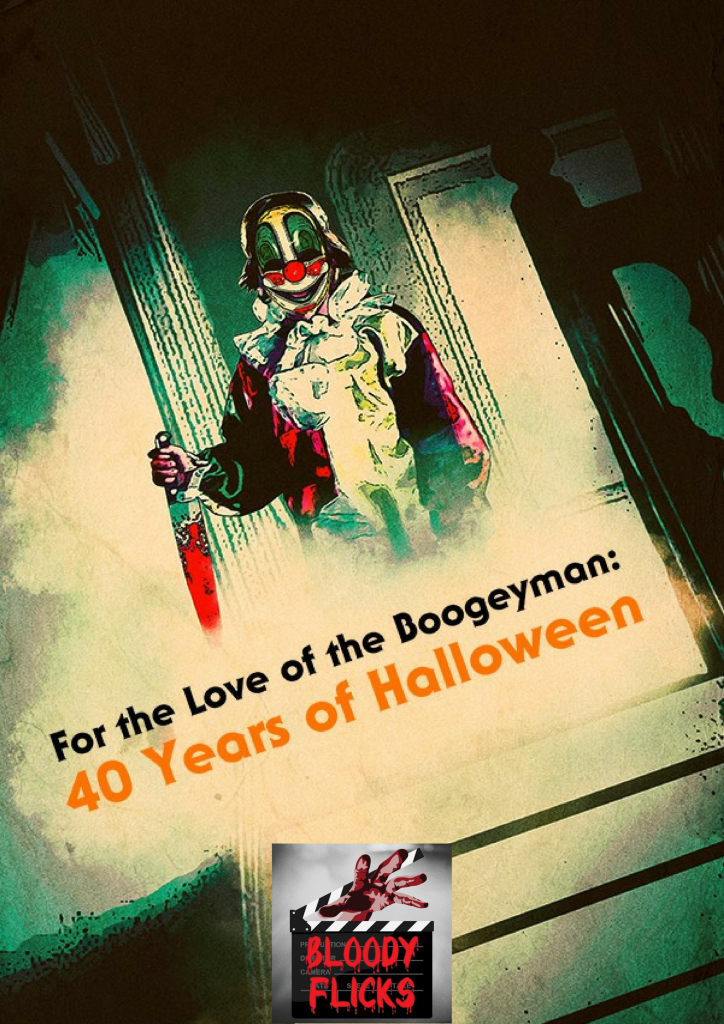 Back on the anthology side of things, Starks has reteamed with VOLUMES OF BLOOD: HORROR STORIES’ Justin Seaman and Zane Hershberger on CRYPTIDS (pictured at top and below), in which a radio talk-show host takes calls from listeners who’ve confronted various creatures. “Working with Justin and Zane on HORROR STORIES was a total blast, so when I got the offer to join them on CRYPTIDS, it was an easy yes. I’m a huge monster-movie fan, and I don’t think they make enough. What these guys are bringing to the table is something I haven’t seen done on an indie scale. I’m not going to say how many beasts are in this creature feature, but rest assured the roars will be massive and blood will flow in buckets. I’ve been privy to all the monster designs and special effects test shots, and they look very cool. With talent involved like Jonathan Straiton [NIGHT OF SOMETHING STRANGE], Billy Pon [CIRCUS OF THE DEAD], John William Holt [10/31], Brett DeJager [BONEJANGLES] and more, how the hell can we go wrong?” 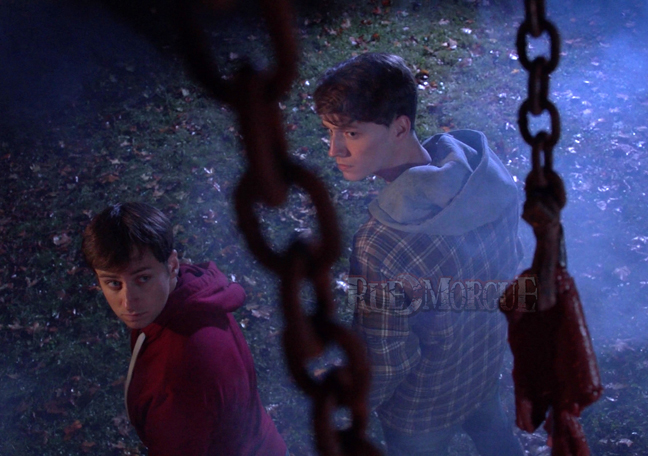 Meanwhile, Starks and Eric Huskisson are busy on the third in their franchise, DEVIL’S KNIGHT: VOLUMES OF BLOOD 3. “We aren’t rushing the production,” Starks notes, “because we want to make sure the final installment in the VOLUMES series is the best. The script is completed, save a few adjustments and rewrites; the narratives and characters are strong, and the body count is the highest it’s ever been. The writing duties were a true collaboration between myself, Ginna Campbell, Jason Turner and Jerrod Brito. Our goal was to keep bringing the fun in horror established in the previous installments, but also create a brand new viewing experience. Next, we’ll be working on securing financing and looking toward casting and selecting directors.”

Finally, Starks is looking forward to the impending premiere of ANGEL, on which he served as executive producer for writer/director Tory Jones. The movie is about a wealthy contractor who hires a group of investigative journalists to track down his vanished daughter, which leads them to an abandoned town with a dark fast. “ANGEL has a lot of great Kentucky talent involved, like Dale Miller, Sonya Delormier, Katie Stewart and so many others,” Starks says. “I’ve seen enough screen grabs and behind-the-scenes photos to know this will be a crowd-pleaser. The world premiere will be held July 21 at the Lyric Theater and Cultural Arts Center in Lexington, Kentucky. If you’re in the area or even the state, absolutely check the film out.” For more on ANGEL, including the teaser trailer, click here. 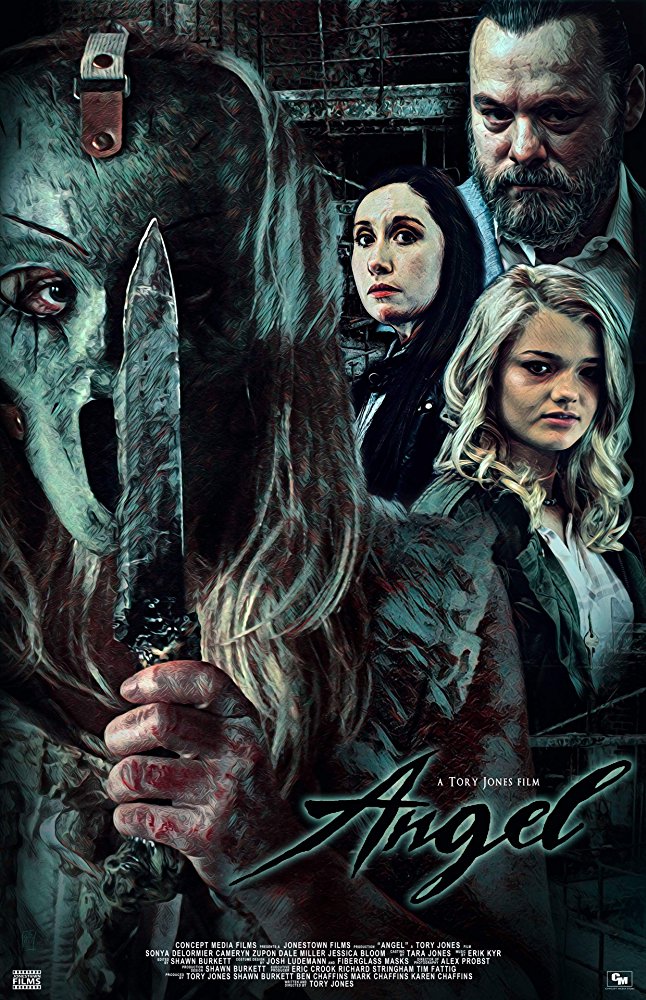