In PREY FOR THE DEVIL, which opened Friday, director Daniel Stamm takes us to an exorcism academy in Boston, where a nun named Sister Ann (Jacqueline Byers) challenges the rule that only men are allowed to learn the holy rites. In the process, she befriends and becomes the protector of young Natalie (Posy Taylor), who is possessed by a particularly vicious demon–which may also have inhabited Ann’s mother during her childhood. Scripted by Robert Zappia (HALLOWEEN H20), PREY also stars Colin Salmon (RESIDENT EVIL), Christian Navarro, Virginia Madsen (CANDYMAN), Lisa Palfrey, Nicholas Ralph and Ben Cross (THE UNHOLY). See the first part of our chat with Stamm and Byers here.

So, the question that always has to be asked about a film like this: Did anything strange or scary happen while you were shooting PREY FOR THE DEVIL?

JACQUELINE BYERS: No, I just met Daniel [both laugh]!

DANIEL STAMM: Not in the normal supernatural way, but we were the very first project to go out during COVID. No one was vaccinated, and nobody knew what was going on. We had this health company on set that also didn’t really know what to do other than to shout, “Masks!” every 20 minutes. But nobody got COVID in the end, because the process was so demanding; everybody had to go wash their hands, and that alone… Getting a team of 100 people to all wash their hands in the same bathroom, you’ve already lost half of the next hour.

BYERS: Yeah, they say in filmmaking, you’re counting seconds and it’s dollars, like, “$1,000, $2,000, $3,000!” It was just a longer process to make this film, because we were dealing with COVID and also dealing with language translation, because we were shooting in Bulgaria. So Daniel would give direction, and the AD then had to translate that direction to the Bulgarian crew. However, we created this system, and the crew in Bulgaria was unbelievable, one of the best I’ve ever worked with. But as for weird things… No one was vaccinated, we all flew to Sofia, Bulgaria to quarantine in a place where you had no idea where in the world you were… It was all a little unnerving, but at the same time, we were all so grateful to be working again, and having the opportunity to make a movie. 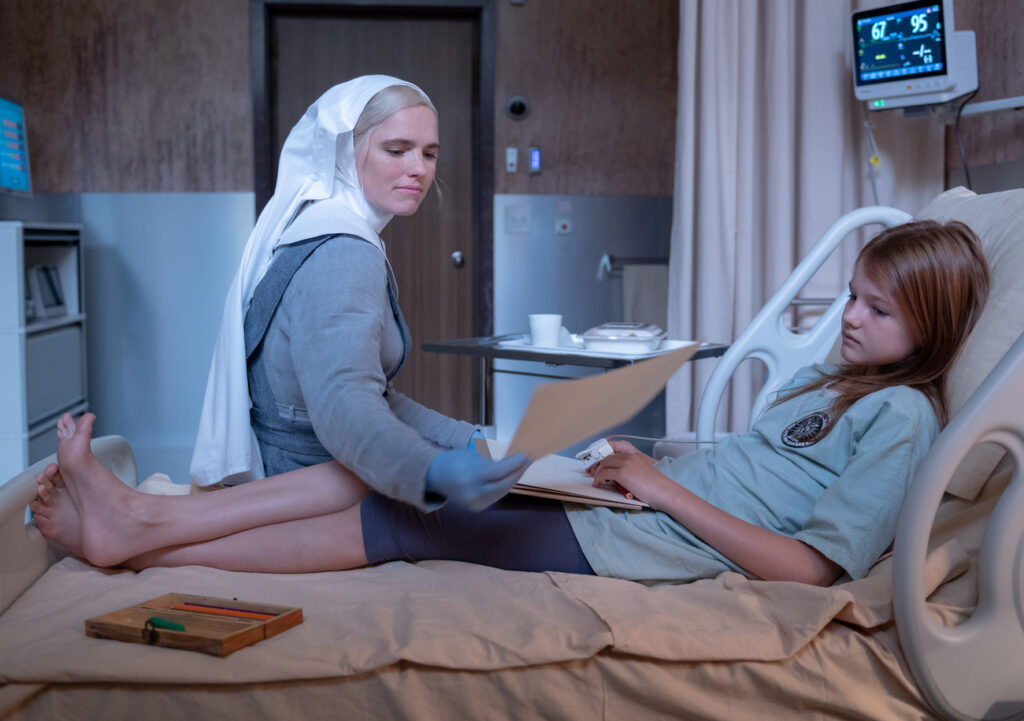 How was it working with young actress Posy Taylor: Jacquie, in terms of bonding with her, and Daniel, putting her through some pretty horrific scenes without adversely affecting her?

STAMM: The question already answers half of what I was going to say. Having Jacquie and Posy bond was half of my job. That was so important to me, because it’s something that is almost impossible to create on set. But by having them connect beforehand–they had Zoom meetings where they were playing games and telling stories and whatever–there was already such a sisterly feeling between them that that was taken care of, which was a big thing off my plate.

BYERS: Daniel orchestrated this space for us to meet, but you can do that and still not connect with somebody. We got really lucky, and Posy comes from a really big family with a ton of sisters and so do I, and her mom and I got on really well. I’ve said this a lot, but she was a little bit like a light for me while shooting this film, because I’d finish these long days, and then I would just go to their apartment and have tea, and I could just wipe off the day because there was a 9-year-old there, you know? You can’t bring that in with you when you’re dealing with a child. Beyond that, it was the first film she’d ever done, and I, as a fellow actress, felt very protective of what that experience could be like. I was not a child actor, but I know that it can go in not the greatest direction, so it helped feed the story of wanting to protect her in real life and also in the film.

STAMM: Posy is also exceptionally smart. It’s not like you can grab any 9-year-old; we had two casting agents, one in the UK and one in the U.S., and they saw thousands of kids and went crazy over it. I worked with Millie Bobby Brown before she did STRANGER THINGS [on the BBC America series INTRUDERS], and she was great already. And she was exactly like Posy, in that you have no idea where she’s pulling that stuff from, but when she does it, it’s just there and it’s authentic and it’s way beyond her years, and it’s intangible, somehow–which makes it harder to work with, because you have to trust her completely, since she’s pulling magic out of the ether. It wasn’t something I could tell her or push her toward; she just found something in very few takes that worked. We were very lucky to find her.

Jacquie, what was the most difficult or most memorable scene to film?

BYERS: I didn’t feel like certain scenes were more difficult than others. It’s funny, Daniel hated this scene on paper, but when I’m interviewed by the doctor, that was a memorable moment for me, where I just felt very into it, and I didn’t remember what happened after, but there was some sort of deeper connection that you don’t know how to speak to as an actor. I love the scene where I’m having a drink outside the school with the two guys, and it was like a healthy break; it was fun, and Nicholas [Ralph] is hilarious! And then, when we did Posy’s final scene, actually, that was probably the most memorable. She finished and we closed her out and did the clap, and she just started crying, and it was such a genuine, beautiful moment to be part of.

STAMM: Why that is so memorable for me is, there was an awareness that she had never acted before, this was her very first experience, and for someone with that talent, if this was a bad experience, it could be the last one, and we might deprive the world of a world-class actress. So for her to have had a good time, and the feeling that she was in a fun summer camp with some filmmaking people and happened to have made a movie in Bulgaria, just meant the world.

Has there been any discussion about following Ann into another movie?

STAMM: It’s the weirdest thing for me; studios only really start talking about sequels after the movie comes out and they see if it did well or not. You would think, if you were running a studio, you would entertain the thought of a sequel after the movie is put together, and then you could not shoot it or not. But there has literally not been a word about it on this film. And in terms of how much we were thinking sequel, it was interesting: On the one hand, I think it’s a recipe for disaster when people hold anything back for a sequel. You want to give the world everything that this story and these characters have right now, and it has to work in the time you have for this movie, and then any sequel has to be an afterthought. But on the other hand, and I thought about this a lot on PREY FOR THE DEVIL, you want to create a character that is so iconic, and feels so rich, that people a) come out of the theater wanting to see more stories about her, and b) for that character and that world to be such a standout and so strong that it automatically would suggest itself as a franchise. So you kind of try to work toward a sequel, without the actual literal goal of a sequel.

You mentioned the ending having changed; can you talk a little more about that?

BYERS: It changed a few times [laughs]! So the whole evolution was, initially, I’m walking down the street, Dante goes to say hi, I look at him, and all of a sudden you can tell that he’s been possessed, and then he steps out and this van or bus or car comes along, and you don’t know if it hits him, and that would be the end. Then the ending was that I do not take the scholarship with the Church and go off on my own, which is the one that I thought was the ending, and I talked about it in an interview, and then I saw the movie again and was like, “Oh, that’s not how it ends, none of my answers make sense!” And now I do take the scholarship.

STAMM: It’s interesting, because in the beginning, you put all the pieces together and you tell the movie what you want it to be. But then there comes a point where a version of the movie is whole enough that it starts telling you what it wants. And that’s why I’m always almost thinking that you shouldn’t shoot an ending. I’ve never used the first ending that we filmed during the main shoot. You should just not shoot it, always keep it for reshoots, because if you do successfully listen to the movie, it will always want a different ending than what you thought in the beginning.

In this case, we were planning for the Church to be this monolith of the patriarchy that is so off-putting that Ann at the end says, “Even though you’ve generously given me this scholarship, I want nothing to do with you anymore. You can’t be helped, you can’t be saved, I’m doing my own thing.” Now, when we shot it, Colin Salmon [as Father Quinn] did an amazing job of bringing empathy to the Church, and conveying an ability to listen and to consider modern thoughts, and to consider change. So suddenly, that ending where Ann says no didn’t feel earned; it felt like, she really shouldn’t give up on the Church, because there is real change that can be done, and certain parts of the Church have signaled that they’d be open to that. So that ending didn’t feel right anymore, and we changed it.