We’ve seen many exorcists on screen before, but where do they learn their trade? PREY FOR THE DEVIL (previously titled THE DEVIL’S LIGHT) takes us to St. Michael the Archangel School of Exorcism in Boston, where men of the cloth are trained in the rites of casting out demons. A key word here is “men”–women are not allowed to receive this education, until Sister Ann (Jacqueline Byers), who dealt with a possessed mother in childhood, joins the school. She is allowed to join the holy classes, and becomes involved in the case of a young girl (Posy Taylor) whose possession may be connected to her mom’s past affliction.

PREY FOR THE DEVIL, opening tomorrow from Lionsgate, was directed by Daniel Stamm, who previously explored this territory in 2010’s THE LAST EXORCISM, from a screenplay by Robert Zappia (HALLOWEEN H20). The cast also includes Colin Salmon (RESIDENT EVIL), Christian Navarro, Virginia Madsen (CANDYMAN), Lisa Palfrey, Nicholas Ralph and Ben Cross (THE UNHOLY). RUE MORGUE spoke with Stamm and Byers about this different take on a classic horror subgenre.

If I dare make the obvious joke, Daniel, that was obviously not your LAST EXORCISM…

DANIEL STAMM: [Laughs] I asked for that! But actually, you are the first one to make that joke, with me at least. Although I did spend years with people making jokes about THE LAST EXORCISM; it was supposed to be this preacher’s last exorcism, not the last exorcism in the world!

So what led you to take on this subject matter again, after all this time?

STAMM: It was a great script. Obviously, the one thing I never wanted to do again was an exorcism movie, because I felt all my creative ideas on the subject were contained in that first film. So my agents never even sent me exorcism scripts anymore, and I thought it was a mistake when I got this one. I said, “This is an exorcism movie!” and they said, “We know, but you should read this one, it’s different.” And it’s true, because the female protagonist changes everything.

There are two things that make it completely different: One thing is that THE LAST EXORCISM spent 90 minutes with the question, is this girl crazy or is she possessed? And this movie spends 20 seconds before we know this is possession; we don’t have to spend 45 minutes on the question, because we’re in an exorcism movie, so we can keep the audience from having to sit through that. Which then opened up so much room for the setpieces, and the question was always, how do you deliver those to a fresh audience, to an audience that had never seen them? There was a 13-year-old who posted a review of THE LAST EXORCISM on YouTube, and it was his first horror movie ever. It was so pure; it was like I was seeing the movie through his eyes, experiencing this stuff for the first time. So I felt that if I was doing another exorcism movie, it needed to work for both audiences. It needed to deliver the setpieces that the 13-year-old came for when he bought a ticket for an exorcism movie, but at the same time, we also had to make a film for people who have seen 20 exorcism movies, and give those things a fresh meaning. We had to find a mythology where things could be reinterpreted. 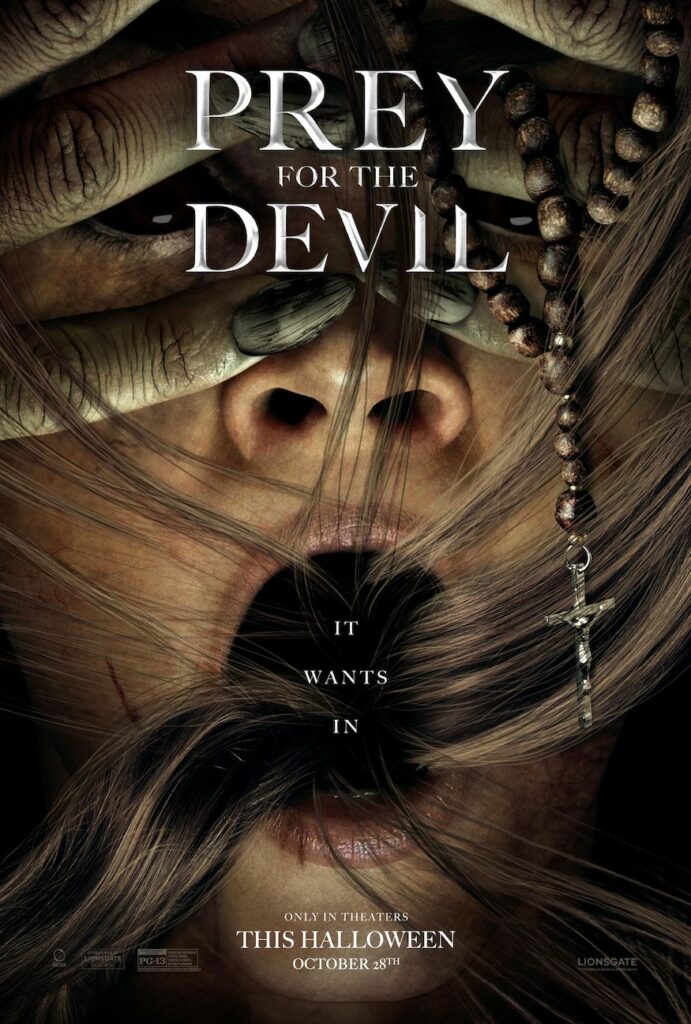 The other thing was that the female protagonist allowed me to tell a completely different story. Suddenly I had sources of conflict, which is obviously what you spin drama from, that you would never have with a male priest, because the woman has to battle the Church, the patriarchy, and earn the right to be allowed to battle the demon. Ann is kind of a revolutionary character, because the Church has dealt with demons and the devil for millennia, and they are quite comfortable with that, but for there to be a female exorcist who says, “Step aside, you’re stuck in the Middle Ages, it’s a new dawn, here I am”—that is much more unsettling to them. And then, she brings in a whole different approach, and closes her Bible and says, “You know what, I’m not going to rely on the word of God, and scream the same Bible verses in Latin at the demon. I’m going to trust my own word and my own connection with this afflicted girl, female to female. I will ignore God, I will ignore the priests, I will ignore even the demon, and I will not see myself as the central figure. I am not the protagonist in this, I am the mentor figure to the possessed person who is trying to free herself from the possession.” All that to me was such a chance to do something new and interesting that I hadn’t seen before.

It sounds like you really invested in the story; how much did you contribute to the script?

STAMM: There’s always a long development process. I just recently, for the very first time, heard the first draft read, because for the special features for the Blu-ray, we got the cast together. When I came on board, there had been another director [James Hawes of PENNY DREADFUL and other genre series] who had developed it, and then I did some development, and then COVID hit and we suddenly had half a year when we could do more development. We brought on David Birke, who is a genius writer who wrote ELLE and BENEDETTA for Paul Verhoeven, and basically LAST EXORCISM for me and never got credit because of Writers Guild stuff, and he came in and did a great job. So it changed quite a bit, and then once the actors came in, obviously we got a feel for what would organically work and what wouldn’t.

And then, in the last interview we just did, I was talking at length about the ending and why I like it so much, and Jacquie said, “That’s not the ending in the movie anymore!” Which is true; we changed the ending in editing. It was right to the last minute, after the test screening. There are a lot of directors who hate test screenings, and I do too in that I want to jump off a roof, and I’m always devastated coming back from them. But it’s the greatest tool you could ever have, because for years, you are basically dancing with an audience in your head, trying to imagine how they would react to this revelation or that fact or this treatment of that, but you never really know. And then, for the first time, you get a real-world audience to look at it and tell you what they feel, and that’s so valuable.

How much of what we see in the movie, regarding exorcism schools and training, is based on reality?

STAMM: That’s all completely real. The whole Church side is all true. The Vatican did open exorcism academies all over the world in 2018, because of a rise in possessions, and today we live in the age of exorcisms; there are more of them performed today than ever before in history. You always think it was the Dark Ages, but every religion has them. So they opened these programs, and we got as much insight into them as we possibly could, because our screenwriter is a practicing Catholic whose son is friends with a deacon who put him in touch with a real exorcist, who told him as much as he was allowed to tell. Robert is always saying that it was weird when he was told all this crazy, terrifying stuff, and then the exorcist was like, “But that’s all I can tell you. There are things I can’t discuss.” And Robert was like, “What on Earth could there possibly be that’s scarier than this!” [Laughs]

The first draft I read was so full of information; there were five seminars of eight pages each, and three-quarters of the script was basically students in workshops. It was full of fascinating information, and then the work really became, how much of it can we pull out so that there’s room for the movie, while it still feels authentic and real?

Jacqueline, what did you bring of yourself to this character? Are you a person of faith yourself?

JACQUELINE BYERS: I am not; however, when I got a draft of the script, I did a lot of research with my friends, and I was directed toward the Bible of Spiritual Warfare, which I used as a tool in preparation for this film. I also heard this story that relates to the way science and religion are in such conflict, but both have a place in this movie. This writer friend of mine grew up Christian, and when he was younger, he would have these bouts where he was stuck in bed and almost dreaming and couldn’t move. If he would go to the Church, they said it was a demon and he was getting possessed, and it was like that throughout all of his childhood. Then when he was about 24 years old, he was talking about this with a writing partner, who said, “What you’re explaining sounds like sleep paralysis,” and he was like, “What??” He was 24 and didn’t realize there was a medical explanation for what was happening. I can’t say for sure whether there are or are not demons or possessions, but hearing that story of how real that demon was in his life and then finding out another explanation, it’s like, this film works in the reverse of that.

What was also very important for me, knowing that I don’t have that fear to make it come alive in a very real, tangible way… When you’re asking what I brought to this film, it was my own fears, my own shame, my own guilt, and then adapting that and creating it so that it fit the story and the character of Ann.