From Fantasia’s official website: An alien takes over the body of a middle-aged drug addict (Gary Green) and goes on a delirious joyride across Cape Town in Ryan Kruger’s Fried Barry, an acid trip of a road movie. Winner of a RapidLion Award for Best South African Film, it’s a tale that’s alternately depraved and oddly sweet – featuring over 100 actors and some seriously bonkers FX. It’s an absolute first in the history of South African cinema – and perhaps in humankind itself!

And, to commemorate the sordid occasion, I took a moment to sit down with Gary Green, the unlikely star who gave life to our titular character, Fried Barry. Gary discusses how he came out of virtually nowhere to land his part on the heels of the short film which spawned the inevitable cult classic from Cape Town, South Africa. 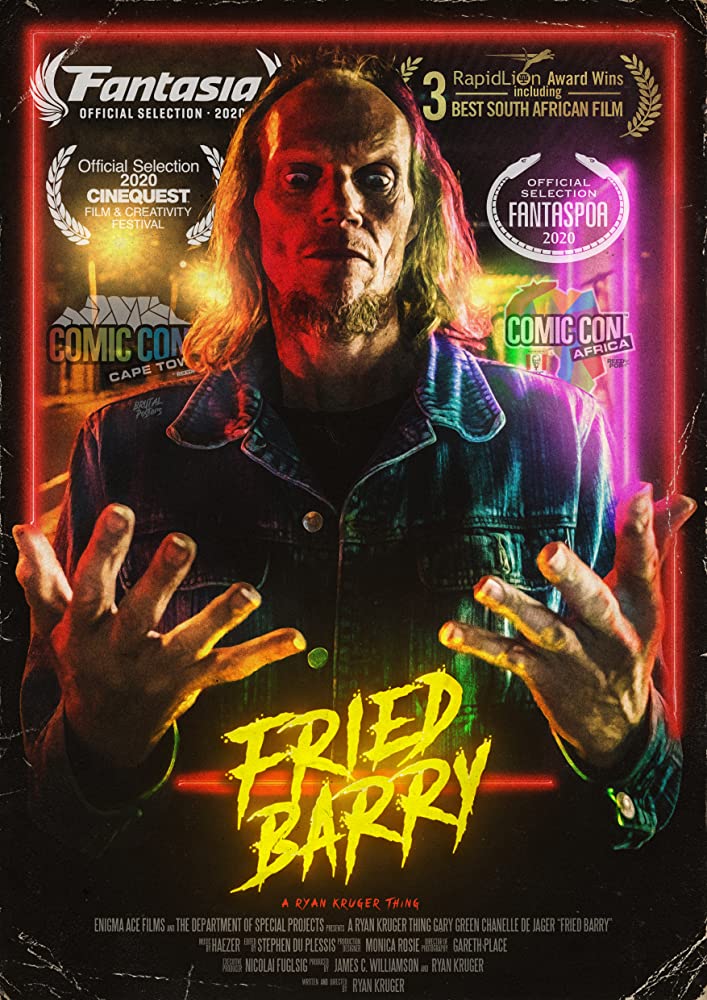 I understand Fried Barry, both the short and, now, the feature length film were your first acting gigs ever. You’d never guess that from your performance. What the heck is in your well that you were able to pull from to achieve the insanely memorable performance you injected into the title character of Fried Barry?
I come from a background extras world and I have been doing that for many years. I’ve always wanted to be in front of the camera and sometimes I’ve been lucky to get featured in the odd thing here or there or get the odd line. Over the years, I’ve been in a few of Ryan’s music videos and shorts but the Fried Barry short was a big breakthrough role for me.

Ryan gave me a few films to watch for my character like Edward Scissorhands and Starman but that was it. So I didn’t have much to prepare for the role – all I knew is what I did for the Fried Barry short film and people seemed to like that so I went with it. Ryan kept me in the dark a lot when we were making the film – I didn’t know what we were doing until we arrived on set. We were always working with a blank slate, from the ground up. But, knowing Ryan and his previous work, we had a mutual trust between one another. But we worked very well together and I’m glad he saw something in me and gave me this opportunity to show people what I can do.

What were the biggest challenges of being on set for the short compared to being on set for the feature film? Which did you find more satisfying?
The short was just one day of shooting and it was amazing to see how it all came together. It was definitely a different experience being the lead actor instead of one of hundreds of extras. The feature was a marathon that came with a lot of challenges. Underwater scenes, sex scenes, lasers, blood and even being naked. I went through a lot but it’s just part of the job. I trust Ryan and I knew I was in good hands and I knew it would turn out amazing.

Looking back at the entire process of filming your first feature film, what are you most happy about as far as what you took away from the overall experience?
The first time I saw anything from the film was at the South African premiere at RapidLion. I was just amazed to see how everything came together to make up this amazing story. It was great to play alongside all these great actors that I admire and look up to and be the lead for a change. The one thing I’ll never forget is on the first day, Ryan took me aside and he said that I wasn’t cast by mistake. He said that I was made for this role and nobody could do it except for me. I’ll never forget this experience and working with the right people makes all the difference.

If you had to pick out a single outlandish, unsuspecting moment from working on the set of Fried Barry which stands out to you above all others, what would that moment look like?
The best moment for me was the hospital riot scene. I couldn’t believe almost 100 people were there on set for that scene. With the fighting and the Steadicam and smoke and sparks flying, it was an exciting shoot. We shot everything in the hospital in one day, so it was a lot of hard work, but it came together beautifully. I loved working with Sean Cameron Michael and Joe Vaz – they both gave such great performances and it was a pleasure to work with them.

With the masterful performances you now have to your credit, do you see yourself wanting to take on more such cinematic projects in the future?
Thank you very much for your kind words! I love acting and I love performing. I can’t wait for the next big role. I wouldn’t mind playing Barry again in the sequel if there ever is one!

Be sure to check out the official Facebook page for Fried Barry and watch out for the wide release date coming soon!