Continuing the interview that began here, we talk further with director Scott Derrickson about THE BLACK PHONE. The Universal/Blumhouse production, which Derrickson scripted with C. Robert Cargill from Joe Hill’s short story, is about a boy named Finney (Mason Thames) who is abducted and imprisoned by a serial kidnapper/killer called The Grabber (Ethan Hawke). His younger sister Gwen (Madeleine McGraw) tries to find him, aided by dreams that seem to offer clues, while down in the Grabber’s basement, the spirits of the villain’s previous victims communicate with Mason via the titular device. (See our review here.) The latest success in a directorial career that has ranged from the prior Blumhouse chiller SINISTER to the Marvel epic DOCTOR STRANGE, THE BLACK PHONE has become another hit for Derrickson, grossing over $23 million in its first weekend.

Were there any concerns over violence or language involving the kids that affected the casting process?

Well, the specific answer is yes, it did affect the casting process. Now, I’ve worked with a lot of child actors, and kids being on the set of a horror movie is a lot of fun; it’s like Halloween for them. Especially for the ghost kids in THE BLACK PHONE, getting to put on the bloody makeup and stuff–they loved it. It’s not scary, it’s not disturbing. But what Madeleine had to do was disturbing, like the whipping scene; she had to go to a very dark emotional place for that. And she swears like a sailor in the movie.

So when I’m dealing with the casting of children, the final step when I feel like I’ve found somebody who’s truly right for a role is a fairly lengthy interview with the parents. I feel responsible if I’m going to be bringing a child not just into the world of the movie but the world of Hollywood; I was the first person to cast Lulu Wilson, who’s now had a huge career ever since I chose her for DELIVER US FROM EVIL. And in that case and in the cases of Madeleine and Mason, I had to talk to the parents and feel like they would be well-loved and well-protected. I discuss specific scenes with the parents, and as long as I feel like the kids have the support they need personally, to deal with both the production and any subsequent success or failure of the movie, then I’m free to cast them. And in one situation, I believe it was SINISTER, I found somebody I really wanted to cast who I didn’t cast, because after meeting with the parents, I just didn’t feel good about that kid being in a movie and possibly moving on to a Hollywood life. 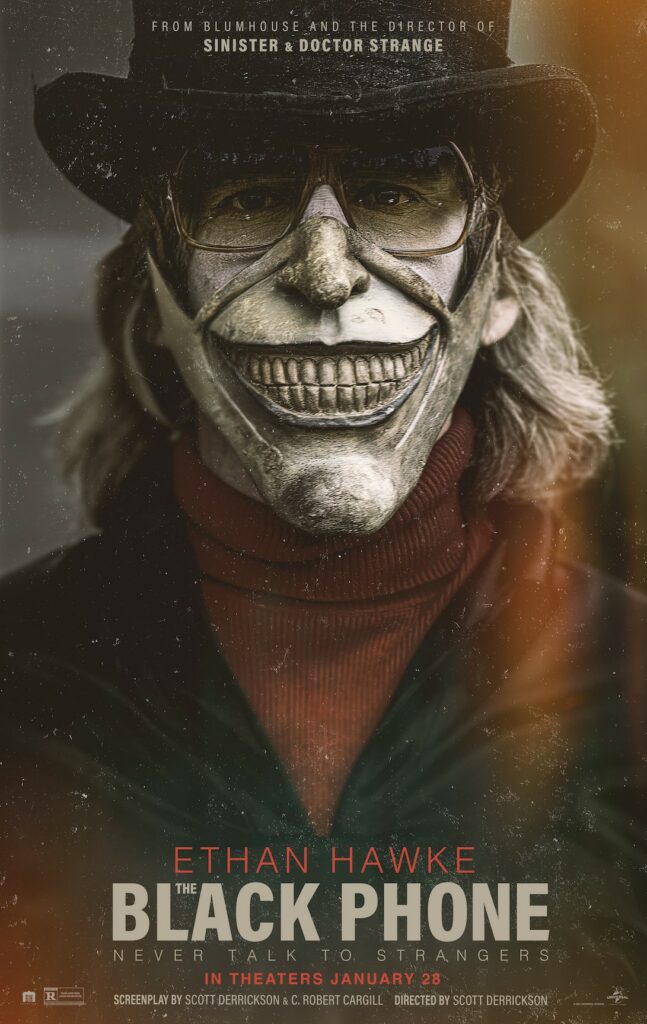 Did it help in McGraw’s case that her sister Violet had already done a few horror projects, like DOCTOR SLEEP and THE HAUNTING OF HILL HOUSE?

Yeah, that family is so great. Her parents are wonderful, and they really demonstrate how to do it right, you know? Madeleine was able to deliver those lines, with all that profanity, like she says it every day, but she’s the sweetest kid, a really happy girl, and a born actress. I think she and Mason are both going to have huge careers.

Talking about the ghost kids, what went into the decision of how much to show them, and how much to keep them as voices on the phone?

That was a real delicate dance of nuances, and a decision to be able to ramp up their visibility as the story goes on. It started with Bruce Yamada [Tristan Pravong] just being on the phone–we never see him as a ghost kid in the basement, we just see him in a flash frame at one point. In the script, ghost Robin was only on the phone, and I was two days away from shooting the scene where he and Finney were going to have that long conversation, and it just hit me out of nowhere: Oh, the audience wants to see Robin again. We had already flown the actor [Miguel Cazarez Mora] back to where he lived, and I said, “We have to get him back, he has to be in the room.” So we got him back just in time, and I sort of had to direct that scene on the fly and figure out how to do it well, and it’s one of my favorite scenes in the movie.

It was about having a sense of what the audience wants to see and not see, and we did a number of cinematic tricks with the ghost kids. They don’t have any shadows; Finney has shadows in the basement, the ghost kids don’t–we removed those. Finney has direct light on him, the ghost kids don’t, and the clothes they’re wearing are completely desaturated of all color. For example, the Denver Broncos jacket kid, the paperboy, wears an orange jacket in the flashback, and he’s wearing the same jacket as a ghost kid, but it’s silver. It’s almost like black-and-white-film versions of those kids, where there is no color presence on them. Little things like that, that you don’t necessarily consciously notice, I think go a long way to giving a sense of them being both present and not present. The most important thing was the audio: When we do see the ghost kids in the basement, we still hear them through the phone filter. We see their lips moving, but the sound is coming through the phone line. 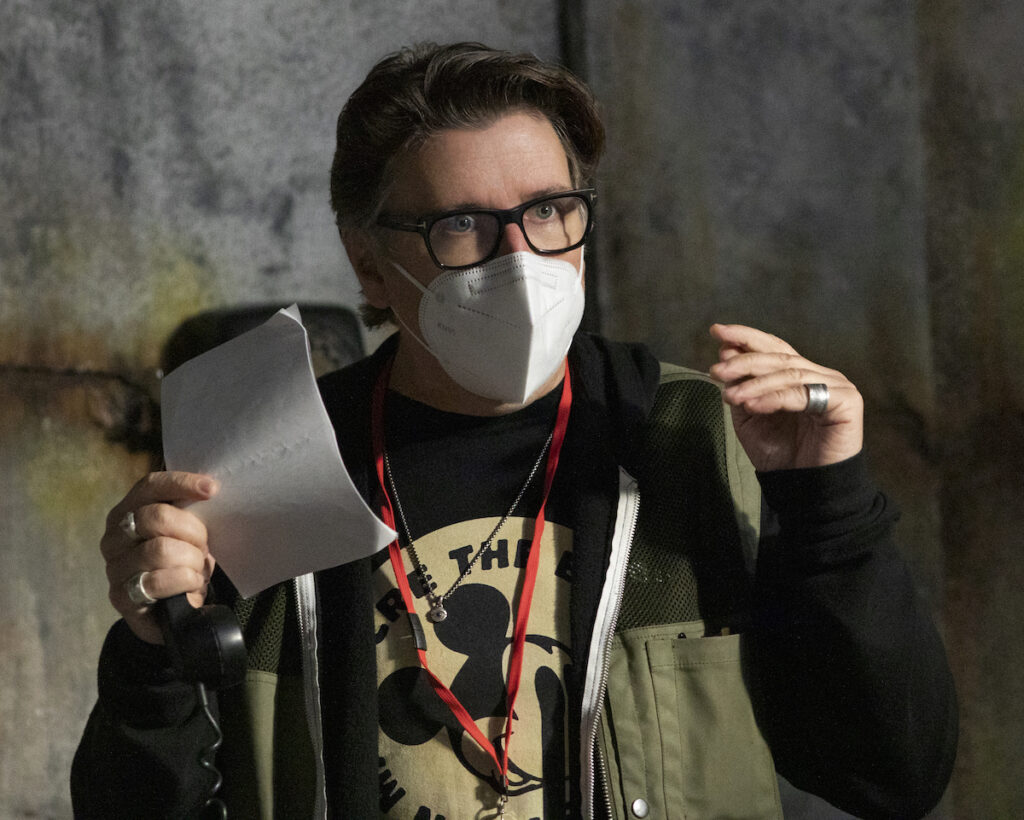 You use a lot of Super-8 film images in THE BLACK PHONE, as you did in SINISTER. What is it about the Super-8 aesthetic that appeals to you?

It’s a couple of things. I have a personal love for it because my dad had a Super-8 camera when I was a kid, and I used to use it all the time. I would use my paper-route money to buy film cartridges and shoot little movies. I’ve always loved that format, and as I started experimenting with it in SINISTER, looking at the projected images of Super-8 on a big screen, boy, there’s nothing like it. It doesn’t look like anything else–the grain quality, the nature of the color saturation. And I find it somehow inherently voyeuristic and creepy. I think if you just found a Super-8 reel in your aunt Martha’s closet and put it on a projector and watched it, no matter what was on it, it would be a little creepy [laughs]. There’s something about it aesthetically that really speaks to me, and seems to translate to the audience in the way I’ve used it so far.

Do you think you might do more Joe Hill stories on screen in the future?

Very possibly; Joe’s got a lot of great stories. The first one I read of his was “Best New Horror,” the opening story in 20TH CENTURY GHOSTS, the anthology that has “The Black Phone.” Cargill and I just optioned that and have hired a very good horror writer to adapt a draft of it, which I received today! So I’ll be doing that at least as a producer, and hopefully as a director. I think Joe’s work is marvelous.

You’ve alternated very expensive megamovies with smaller, down-and-dirty genre pieces. Do you intentionally try to balance the two, or is it just a matter of which projects come your way?

It’s neither. It doesn’t matter to me, the size of a movie. First of all, they’re all the same in that you never have enough time or money; SINISTER was $3 million, DOCTOR STRANGE was over $200 million, and on both movies I needed more time and more money [laughs]. That’s just how it always is. I had a pretty bitter studio experience making THE DAY THE EARTH STOOD STILL, and I failed in a lot of ways on it. There are things in that movie that I love, but then there are a lot of reasons why it didn’t turn out better than it did. I took that movie because I had made THE EXORCISM OF EMILY ROSE and it was a major hit, and the next thing you do is take a big studio movie, and that’s what I did. And after that, I promised myself that I would never think strategically about the movies I’m making. Instead, I focus on, what’s the story that’s in me right now, what’s the story I feel like I can tell? If I can only make one more film in my life, what is it? And that’s the movie I go make. Make every movie like it’s your last one, because one day it will be.