Isaac Ezban has become one of the more exciting talents on the genre-film scene thanks to THE INCIDENT and THE SIMILARS, two movies he made in his native Mexico that became favorites on the festival circuit. His first movie in English, PARALLEL, is now poised to win him an even larger following when it sees select theatrical and VOD release this Friday, December 11 from Vertical Entertainment, and RUE MORGUE got the chance to speak to him about this superior dark science fiction exercise.

Scripted by Scott Blaszak, PARALLEL focuses on four friends who uncover a hidden room in the house they share, and within that a mirror that serves as a gateway to a world very much like our own. Devin (Aml Ameen), Leena (Georgia King), Noel (Martin Wallström) and Josh (Mark O’Brien) soon learn how to navigate this realm, and then how to utilize it to better their own professional and personal lives. As they discover that there’s more than one “alt” accessible via the mirror, their exploitation of the possibilities gets out of control, with sometimes violent recriminations. With PARALLEL, Ezban (who also contributed a segment to the recently released holiday-horror anthology DEATHCEMBER) tackles classic genre themes with a very modern, visually imaginative approach.

How did PARALLEL become your English-language debut film?

Well, my first two films in Mexico, THE INCIDENT and THE SIMILARS, were both science fiction films, and very heavily inspired by THE TWILIGHT ZONE; they’re what I call human sci-fi. It’s the kind of science fiction that uses its fantastical elements to talk about something real, and that’s my favorite kind. I always say that THE INCIDENT is a movie that addresses the passage of time through sci-fi, and THE SIMILARS talks about identity. So after making those two movies in Mexico, I was really looking to do a similar film in English. Also, I wanted to try jumping aboard someone else’s script and make it my own–bring my filmmaking and storytelling abilities to another writer’s story. And I read a lot of scripts during that year that just didn’t feel like I could personally connect with them. 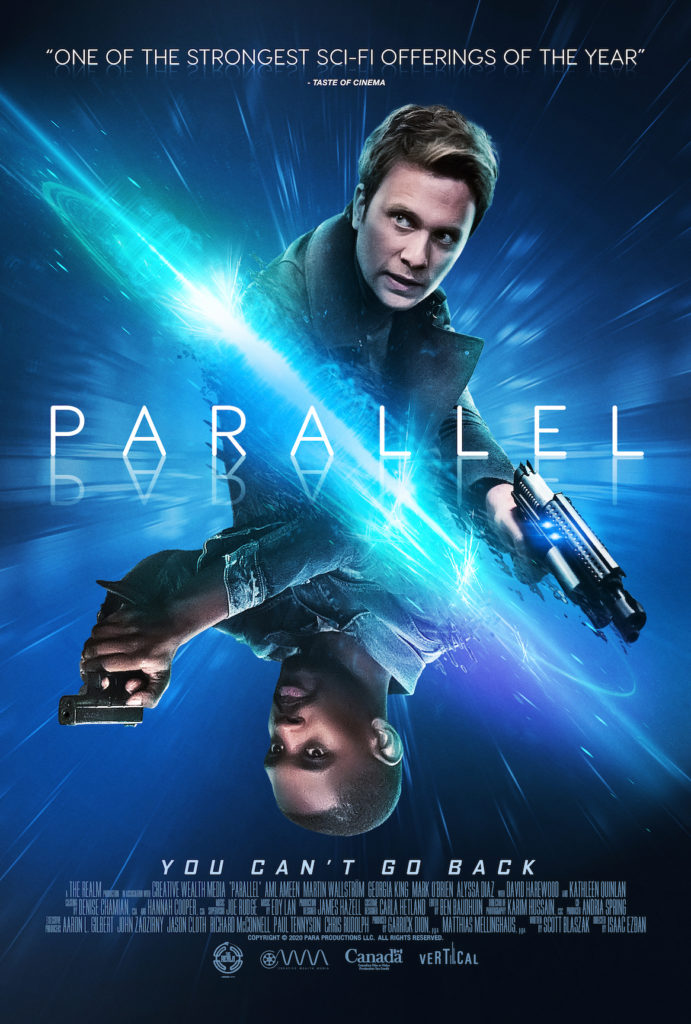 But when I read PARALLEL, I was like, “Whoa, I need to make this film!” I was sure the minute I finished it, for many reasons. PARALLEL, for me, is more of a character drama with hints of sci-fi. It’s about these four people, and each of them has a very peculiar and special relationship with the others, and those relationships are what move the story forward. So the sci-fi element is in there as a metaphor in a story about the destructive power of ambition. This just felt like something that I should direct; without taking any credit from our very gifted writer, it almost felt like a script I could have written myself. I connected with the material, and enjoyed the element of how the film is kind of classic and modern at the same time.

Did you do any significant rewrites, and what elements of your own style and approach did you bring to the project?

Yes; actually, everyone involved was super-open to me adding all kinds of modifications and making it my own. I worked for a full year on the script with the producers and Scott Blaszak, the writer, figuring out how to make it stronger. I always say that PARALLEL, for me, is like FLATLINERS meets THE SOCIAL NETWORK; that was my vision for the movie I wanted to make. That’s how I pitched it to the producers, and inside the pitch is the true essence of this movie, which is, you have a story in which each of the characters uses the mirror for a very practical and personal goal–you’ve got Devin and his dad, Josh and his girls, Noel and his gadgets, Leena and her art. Each of them wants something specific, which is very much like FLATLINERS, or SHALLOW GRAVE by Danny Boyle or CHRONICLE; those were some of the movies we had as references. At the same time, the movie takes place in a world of social media and science labs and app developers; these guys want to be the next Steve Jobs, so it’s a very social-metaphor kind of movie.

It was very important that the journey of these four people trying to achieve something was clear in the script. Those were some of the changes we made; for example, we focused more on the Devin narrative, everything that happens with him and his dad. And also, I changed the ending; I remember when I first read the script, I just didn’t like the one that was there. It felt like a really classic happy ending, where, OK, now it’s over, we’ve resolved everything. A good friend of mine always says, “Any great sci-fi movie has to become a great horror movie in the last 15 minutes,” and if you think about it, that’s actually true. And I always hate it when a horror movie has a happy ending, so I came up with this coda that might be confusing for some. But I think it’s better to have a movie leave you guessing and wondering what’s going on, and it’s an ending that kind of mirrors the opening of the film. And overall, once I started working with the actors, of course, we tweaked the dialogue to make it more in tune with what they had constructed for their characters.

One thing I liked about PARALLEL is that in some films like this, the characters make foolish decisions, but this one is about smart people grappling with the possibilities of this phenomenon they’ve discovered.

Yes, definitely. Their goals are actually very pure: At the beginning, they don’t want to conquer the world and become multimillionaires, they just want to win a client and beat a deadline, and that’s how they start using the mirror. And then they discover they can make more money out of it, they can make some profit, and take advantage of the other worlds. So you’re absolutely right; these are all smart people, and they’re too smart for their own good. They’re smart enough to see the mirror as a possibility to become wealthier and expand their company, yet they don’t see how that is going to end up destroying their relationships and everything they have between them, and eventually their lives.

Also, I always say this is a classic story of playing with fire from the gods. That’s something you’ll find in the TWILIGHT ZONE episodes where, say, somebody finds a magical camera that can show the future, and that winds up destroying them. I love those kinds of stories, and the fact that the characters are smart only makes it more painful and interesting to watch.

Karim Hussain’s cinematography does a lot to make the parallel worlds distinctive and distinguishable, so can you talk about your collaboration with him?

He was amazing to work with, and somebody I learned a lot from. He loves cinema like few people I’ve ever met. And here’s a little secret: Whenever somebody says, “Oh, this movie is very well-directed,” usually what they mean is it has a great DP. From the moment Karim came on board, we talked about how this film should have a special, visually stunning approach, because it’s very dialogue-driven, and I didn’t want it to look like a TV episode; I really wanted to be cinematic. We wanted to make the colors intriguing, and shoot the dialogue in an interesting way.

And even more than that, the cinematography had to work for the story, which is about parallel universes. So Karim and I came up with the idea to differentiate the universes in a special way that would also be a cue for the audience to know which one we are in. Because the story goes super-fast, it was important to give the audience those visual cues, so we decided to shoot with different lenses. Everything that takes place in the real world, the “normal” universe the characters come from, was shot with spherical lenses, and anything in a parallel universe was shot anamorphic, which gives you this dreamlike quality where the sides of the frame are a little distorted.

We also played a lot with camera moves, and we had a great Steadicam operator, Yoann Malnati, who always works with Karim and also did Darren Aronofsky’s MOTHER! and other great films. He’s really a magician with the Steadicam; he can do anything. I felt like a little kid in an amusement park on PARALLEL, because on my first movie THE INCIDENT, I think we could only have four days with the Steadicam because of the limited budget, and on PARALLEL, we had the Steadicam for literally every single day of production. And we found ways to justify the use of it; every time we go to a parallel universe, the camera moves a lot more. In addition, the colors we use in the parallel universe are more saturated, and Karim even created some crazy flares, just to make it feel more like we’re in a dream.

Something I really like about Karim is that he prefers to do so much practically. Of course, we added some color grading and tuned up the flares a little bit in post, but most of it was done in camera. Making a film is all about making choices, and the more extreme the choices are, the more they’re going to mean to the narrative. And the decisions we made give the movie a really interesting and organic look, and makes it special.