An especially relevant episode of Blumhouse/Hulu’s INTO THE DARK series premiered yesterday for the Fourth of July, with genre fave Barbara Crampton in a key role. We spoke with the actress about its creation and its themes.

Directed by Gigi Saul Guerrero (who talks about it here), from a script she wrote with Efrén Hernández and James Benson, CULTURE SHOCK starts as one kind of horror story and then becomes another. Martha Higareda stars as Marisol, a pregnant Mexican woman anxious to cross the border to what she believes will be a better life in America. Her journey to that crossing point is harrowing…and then she wakes up in a picture-perfect U.S. town, where Crampton plays Betty, who welcomes Marisol to her new home. But everything seems too perfect, and soon frightening cracks in this all-American paradise begin to show. It’s a vivid role for Crampton (who’s also a producer on the about-to-roll remake of her Stuart Gordon classic CASTLE FREAK), who first became aware of rising director Guerrero a couple of years ago. (Note: mild SPOILERS follow…)

How did you get involved with CULTURE SHOCK?

I went to the Morbido Film Festival in 2017, and Gigi’s web series LA QUINCEAÑERA was showing there. I’d heard of [Guerrero’s production outfit] Luchagore though I didn’t really know what it was, but it sounded interesting, so I went and watched it, and I loved it so much. It was a breath of fresh air. She had so much intensity and passion packed into that show, and I couldn’t believe what I was watching on the screen; I had never seen anything quite like it. It was full-bodied, it was really gory, it was over-the-top and the acting was intense. So the next day, I went back and watched it again, and I had never done that at a film festival. I’d never seen the same movie twice, one day after the next, because there are so many things to watch, you know? But I loved it so much, I thought, “I can’t quite wrap my head around this gal and what she has accomplished here.” 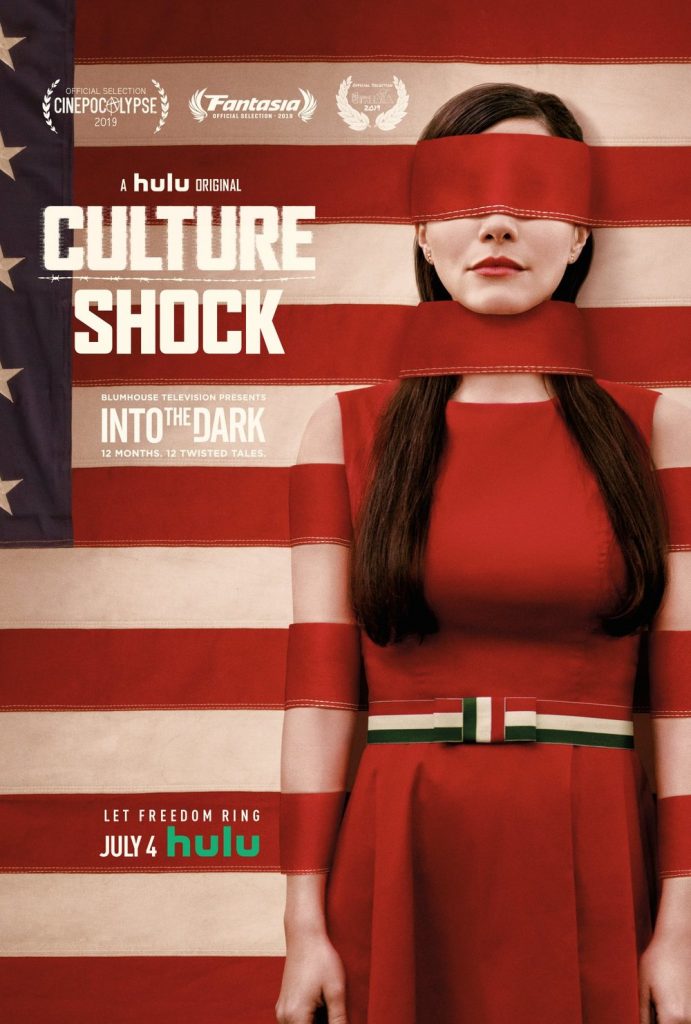 Then I made a point of seeking her out and meeting her. We stayed in touch, and when she told me she got an episode of INTO THE DARK, I was very excited for her. A couple of months later, she said, “There’s actually a part for you. Would you want to come on and play Betty?” Television being what it is, I had to audition for it, which I was fine with, and everybody seemed to like me, so that was it.

Betty is a very heightened character, radiating cheeriness to the point where it becomes disturbing. How did you approach playing her?

I asked Gigi for a lot of direction, because I had to walk the fine line of being a person who wants to make Marisol feel completely comfortable in this world. Betty needs to put her at ease, and make her excited about living in America, but at the same time, she’s there to make sure that Marisol does all the things we want her to do, and is compliant with us. I had to be believable about what Betty is doing, so there was a lot of talk back and forth about how much to do—was I doing too much, was I doing too little? A lot of it had to do with working out degrees of my character’s forcefulness with Marisol.

Where did they set up that pastel-perfect town?

It was at Pomona College. There used to be a research center there, where they were studying children with some sort of behavioral issues or learning issues, and there are homes that they put the test subjects up in, and a lot of buildings that housed the research centers. So actually, it was not too far from what we’re doing in the movie! The facility is now abandoned, and people use it for shooting quite often. It’s a picture-perfect town, and the production team came in and made it look beautiful with flowers and banners and flags, and all the cheery clothes that the costume designer had everybody wearing. They wanted it to look like what you would expect to see in Pleasantville or Stepford or something like that, and they wanted a big contrast with the first part of the movie, when the immigrants are heading for the border, and I think they achieved that.

How did Guerrero take to directing her first feature-length project?

She is like a football coach on the sidelines. She’s in there with every play, she’s in there after every take, coming over to you, offering advice, giving you direction, modifying your performance. She’s a very hands-on director, very collaborative. I loved working with her, and I feel like everything you see on screen has a real clear throughline. The characters and the story all have clear beginnings, middles and ends; you feel like everything in the story is working toward where Gigi wanted to go, and everything you see on screen is molded from her brain through us. I can’t say enough good things about her; I just had the time of my life working with her, and I think she’s really gonna go places.

CULTURE SHOCK is very aggressive in the way it presents and attacks its political themes. Can you talk about that side of it?

Well, I think some of the best horror movies have political or social undertones, and comment on what’s going on in society. We had INVASION OF THE BODY SNATCHERS, we had NIGHT OF THE LIVING DEAD, we had SOCIETY by Brian Yuzna, we had GET OUT—the list goes on. Immigration is a very topical issue to be talking about right now, and Gigi handled it with a lot of sensitivity for the plight of the people who are trying to cross over. They’re not bad people; they want a better way of life for themselves, and what she did was put a very human face on a horrible, tragic issue that’s being highly politicized. These people are suffering, and being kept in cages and not being given soap and toothbrushes and being separated from their families and worse—they’re dying. Gigi was very sensitive to them, and I think the end of the movie has a hopeful message about what this issue could mean for you personally. Can you change things yourself, are you going to take a chance?

It’s especially topical at the moment, with all the stories coming out about the border facilities. I hate to use this word, but it’s almost serendipitous that the movie is premiering now, in the midst of all this conversation.

I agree, and we filmed CULTURE SHOCK maybe three months ago, when it was just starting to heat up. It was brilliant on Blumhouse’s part to have the balls to say, “We’re going to tackle this issue.” Kudos to them for taking that on. I did see some social-media posts when the trailer came out where people were saying, “Oh, this is leftist propaganda,” and “Hollywood is leftist,” but if you watch the whole movie, it’s really not. You get to the ending and see the choices the characters make, and there are a lot of different choices that people have—to make things better, all of us. Not everybody is going to have the same answer to these questions, and Gigi gives us the opportunity to think about that and make our own decisions.

You mentioned that you shot the movie three months ago; is there a satisfaction in doing the work and then seeing the end result so quickly?

Yes, because with most of the work I do, I don’t even know if it’s going to be bought by a distributor or come out. I mean, I have a couple of movies I’ve made over the past few years that played at film festivals—one especially, REPLACE, got bought by a distributor in America [Uncork’d Entertainment], and that movie still hasn’t been released in the United States. So it’s nice to be part of a project that people are actually going to see [laughs], and I’m assured that people are going to watch it. It was exciting for me to work with Blumhouse, and I love what they’re doing now. Making a movie with them was like a dream come true—and being on the Hulu network. Who doesn’t want to work in TV these days?