Blumhouse’s horror series INTO THE DARK has given us 10 months of seasonal horror treats. Ranging from body to psychological horror with dashes of kidnapping and sprinkles of torture, the series may not always be consistent but it sure is mesmerizing.

Horror has always and will always be a political canvas and the current state of politics is rich for inspiration. Rather than dealing with the current conversation at the U.S.-Mexico border with either gritty realism or playful satire, director Gigi Saul Guerrero chooses both. Her entry into the INTO THE DARK series, CULTURE SHOCK, refuses to look away from the real horrors of those trying to enter America but also makes use of some cinematic liberties to enhance the terror of border crossing.

Though this is her first foray into feature-length directing, Guerrero is not exactly a newcomer. She has been directing since 2011 and is co-founder of the production company Luchagore Productions. We got to sit down at last month’s Cinepocalypse to talk about making the transition to feature directing, working with Blumhouse, and what scared her as a kid.

How did you first get involved with Blumhouse and INTO THE DARK?
This all came about by being in the right time at the right place. Blumhouse was my first general meeting in July last year. I signed with my agents this time last year, and they got me out there. Blumhouse was my first meeting and it was just a general meeting. Within the conversation, they started talking about this series they were working on that was going to start on Halloween. They were just about to start tackling this story that was a Mexican story. I was like, “Oh, tell me more!” They said it was a border crossing horror. I asked if they had seen my border crossing horror short, EL GIGANTE. I told them to watch it and call me back. The rest is history. I did the whole process, like pitching, but they found their director. This was just so recent. We made this whole film in five months, starting in January. I felt that if we were going to talk about it, let’s really talk about it, because now is the time. Now is the time to go that far with it. When it came to the opportunity to rewrite, I didn’t want to hold back. That’s why GET OUT is so good. They don’t hold back. They talk about it, visually or with the aesthetic. The horror is there, the underlying tone is there. Why not? Why be vanilla about it when it is in the news every night?

The beginning of the movie feels so raw. Was there ever a question of pulling it back a bit? 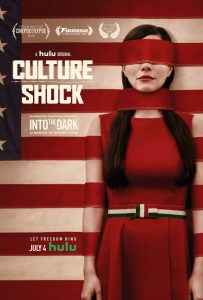 There was no holding back. One of the biggest wins was the trust in having this in Spanish. We can just feel what these people are going through, and have literally a culture shock when the film changes. I feel I got everything in there. I think that is one of the greatest things about Blumhouse; they let their filmmakers do whatever they want, and they trust them. That trust at Blumhouse is amazing. They really make you think on your feet. Their budgets are smaller but they are smart with it. I look at the film, and I say, “This is a really cheesy movie.” I feel good about it.

Being a part of the established series, what structural shortcuts were put in place in the production?
They are on a TV schedule, which is intense. We are talking two and a half weeks to prep, sixteen days to shoot, couple months to edit. Back to back, the crew and everybody is set to go. You as the director, and maybe the cinematographer, are the only new ones there. Everything was ready for me. It was a little scary for me because I have my Luchagore team. But, they set you up with great people and you have all that trust the film turns out as good as it can be.

For casting, how did you find Martha Higareda?
She is really big in Mexico, and one of the big shows she has done in the U.S. is ALTERED CARBON. She is in a lot of romcoms in Mexico; a lot of funny films. I was hesitant at first, but after meeting her and Richard Cabral, I could feel the enthusiasm and excitement from all of them, but especially Martha, to tell a different border crossing stories. As an actress myself, I’ve auditioned for a lot of border crossing stories. All of us have, and it is the same(ish) thing every time. Both Martha and Richard said this was the first time they really wanted to make this movie. You can see it in the movie, their enthusiasm for what they go through. Martha’s primal instincts and her choices, you can tell she is passionate. I can feel the authenticity from everybody. It came very genuine and very organic that I was directing them in Spanish.

Was there ever a discussion to not have a big portion of the film in Spanish?
We never even talked about doing it all in English. We just came to set, directed them in Spanish, then I would tell the crew in English what we were going to do. It felt so genuine. Everybody felt a part of it. It was really hitting them. That, to me, is such a great memory. I was directing them in Spanish and it is an important topic in the film.

In terms of authenticity the language really helped. It is like we are observing what is happening rather than being told the story.
There were some discussions to have less Spanish, but I really felt in my heart it had to be this way.

When did Barbara Crampton get involved? You can’t get greater horror royalty than her.
Barbara is the shit. For the role of Betty, it was by far the hardest role to cast. Not a single person was nailing it in that room. Barbara hadn’t auditioned yet.

Did you write the role with anyone in mind?
No, I didn’t have anyone in mind. And I really like that character. She was one of the characters that I rewrote to be there longer. Betty could be cheesy or she could be fake; she could be played in so many different ways. Nobody was nailing it, we were about to shoot, and I was desperate. Then I remembered Barbara. She is a little young and hot for the role, but I think she could be good for it. She doesn’t live in L.A., so she sent in a self tape. Honey, that was the best self tape I could have asked for. Her tape was so good. We knew we found Betty. She’s been so supportive since she saw my work at Morbido Fest in Mexico. She was there for two screenings of mine. She has this motherly support and she really cares. She cared what every actor was going through. Even though she isn’t in the first half of the film, she was caring about that, and what they went through. She’s incredible. And she is really good! She’s creepy. She was so excited to play something so different. I can’t wait for her followers to check this one out.

Why do you love horror? What scares you?
That’s a big question. To take it way back, I was kept away from everything violent or related to horror. I come from a super Catholic, super Mexican, strict house. My mom and grandma are very Catholic ladies and everything is the devil, everything is a superstition. We are very spiritual people. I was intensely kept away from horror. When I saw my first horror film, I couldn’t understand what fear was. I was excited to feel that the movie had impacted me so much. I couldn’t understand how a movie could follow you.

What was your first horror film?
CHILD’S PLAY 2. I was feeling Chucky in the room. I didn’t understand that the feeling was fear. I was so excited I would open and close my bedroom door, thinking he would appear, because I felt his presence so heavily. I saw THE EXORCIST and it was the same thing. I was stoked that Linda Blair was going to be in my room over night.

And as a Catholic, watching THE EXORCIST?
That was a lot. From now on, everything I watched I loved everything that impacted me. It made me feel or think for a while after. That’s why I loved genre. Horror is the only genre where, in an audience full of people, you will hear all kinds of reactions. If you watch a comedy or a drama you will feel one way or the other. But with genre, you’ll have an audience of passionate fans, and you will hear people squirming or screaming or grossed out, people like you and me screaming, “fuck yeah,” cheering, people laughing out of nerves. You see everything. No other genre can do that. For me, as a filmmaker, the most rewarding part is hearing the reactions and feeling how it impacted them. That’s why I love genre so much.

What are you working on now?
I’ve got my horror TV episode coming up on Amazon. I can’t say which one yet, but it will be really exciting. I’m up for a few features, and let’s keep our fingers crossed.