The creator of A POLISH VAMPIRE IN BURBANK, NUDIST COLONY OF THE DEAD et al. has a new comedic take on the genre.

Writer/director Mark Pirro recently completed THE DECEASED WON’T DESIST!, and plans a streaming release in the near future. Though the title might suggest a zombie flick, it’s actually a variation on an old-dark-house murder mystery. The synopsis: “Rudy Barnett [Ernest Kearney] died with a large chip on his shoulder, leaving behind about a half-dozen heirs and about 700 million dollars. But in order for the heirs to possibly collect anything, they are lured up to an isolated cabin in the snowy mountains, where Rudy has produced a series of videos that are revealed throughout the evening. He informs everyone on one of the videos that one of them will inherit his estate; the rest of them will be dead by the end of the night. Somehow he managed to disable all their cars, jam their phones and cut off their internet access. Soon, one by one, the heirs start meeting their deaths, immediately followed by a new video of Rudy commenting on what just happened. It poses the question: Is Rudy really dead?”

In addition to Kearney, who appeared in Pirro’s previous COLOR-BLINDED and RAGE OF INNOCENCE, other veterans of his past movies in the DECEASED ensemble include his regular star John McCafferty, Debra Lamb (DEATHROW GAMESHOW), Damon Evans (RECTUMA) and Douglas MacPherson (RAGE OF INNOCENCE). Also part of the cast are Sarah Carson (cousin of Johnny), Rachael Olsem, G. Larry Butler and Dani Scott. “I’ve always wanted to do a mystery/comedy,” Pirro tells RUE MORGUE, “and since I’ve run the gamut from bizarre comedies to thrillers, this seemed to be a nice direction to go.

“We started filming this at the end of 2019, just when the COVID pandemic was gaining momentum,” he continues, “but managed to get through it with only one actor, John McCafferty, bailing out of the project about a third of the way through. I filmed him in front of a greenscreen basically saying that he’s leaving the cabin because his ‘work is done.’ I did a little rewriting and shifting things around, giving most of his scenes to Rachael Olsem. Her character was supposed to die early in the film, but because of McCafferty, she gets to survive longer. Other than that, everything went smoothly.”

Pirro also notes that THE DECEASED WON’T DESIST! took a couple of cues from an obscure 1973 horror/comedy called ARNOLD. “ARNOLD is about a dead man who communicates with people by having audiocassettes delivered to them as they die one by one. He’s a rich guy who has his money hidden somewhere, but nobody knows where, and they hope maybe the next audiotape will reveal where it is. DECEASED takes the basic concept of a dead guy communicating with the living and improves on it by having Rudy communicate via a series of prerecorded videos that keep appearing after each person dies. That’s pretty much where the similarities end.”

We’ll keep you posted on THE DECEASED WON’T DESIST!’s release! 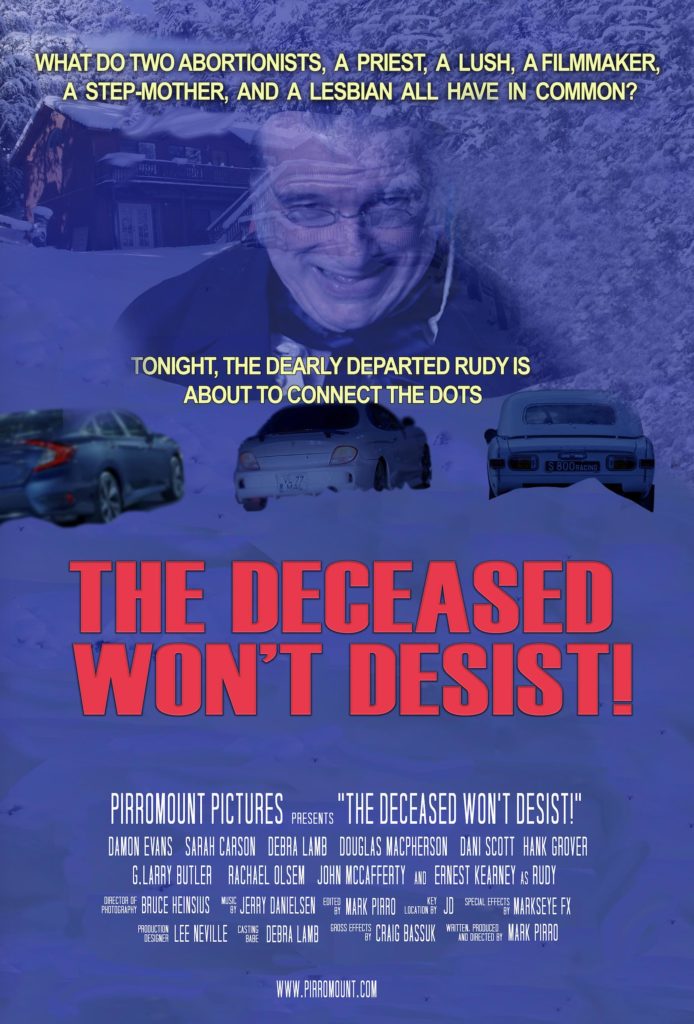