Over at his Facebook page today, filmmaker Pete Schuermann revealed his plans to remake the 1972 cult favorite CHILDREN SHOULDN’T PLAY WITH DEAD THINGS (pictured), and unveiled a poster (see below). He also gave RUE MORGUE some exclusive words about his plans for the project.

“I’m staying close to the original in terms of plot and, more or less, the characters,” Schuermann tells us. “The modern angle comes in with the addition of the Internet and social media influence. In my version, a group of young, independent filmmakers are staging an on-line promotional event on Halloween in a cemetery for maximum-security convicts. There is a big twist as to the type of prison it is, but I probably shouldn’t mention that just yet! In the original, it was a little vague as to why the characters were doing what they were. I make that very clear this time.” 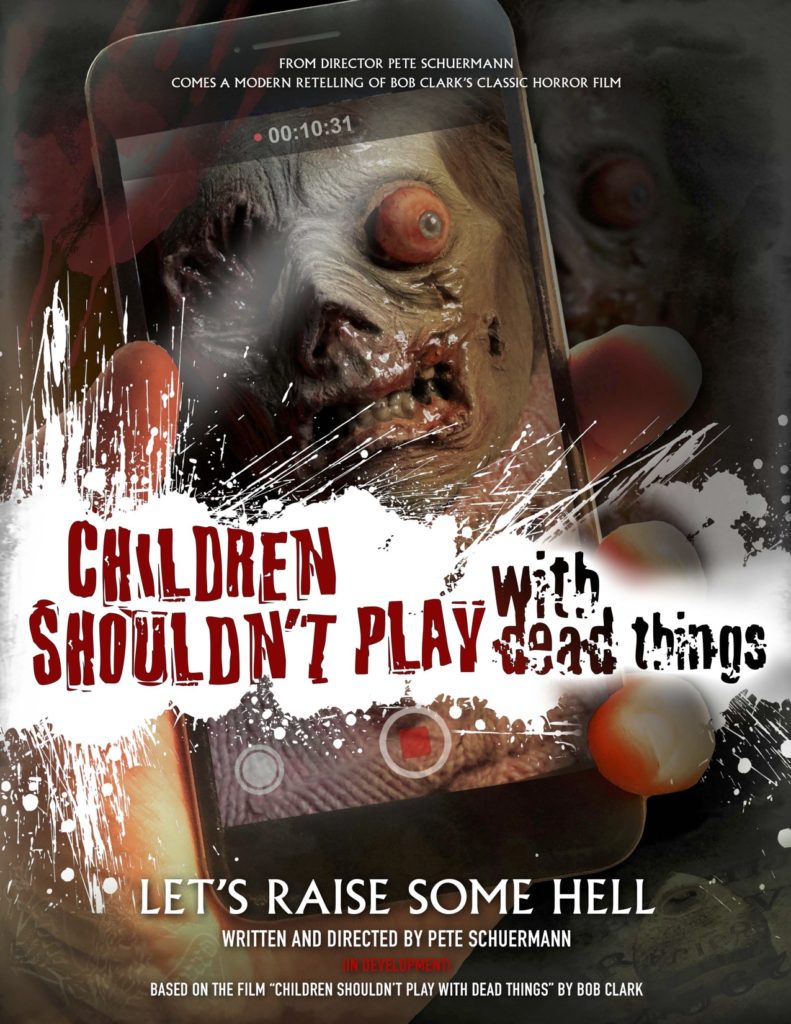 Schuermann previously wrote and directed 2014’s THE CREEP BEHIND THE CAMERA, about the making of the notorious Z-movie THE CREEPING TERROR by a filmmaker who was a monster himself. So it’s a natural follow-up for him to reboot writer/director Benjamin (Bob) Clark and writer/star Alan Ormsby’s story of a theatrical troupe who use an exhumed corpse in a satanic ritual and wind up raising the dead. “The original production team, Midnight Owl, had seen THE CREEP BEHIND THE CAMERA and was impressed with its combination of dark humor and horrific reality. I think I was able to show my resourcefulness with a lean budget and tight timetable. There has been a lot of back-and-forth negotiating, but now we’re set to move forward into development. We’ve got a way to go with locking in partners–and those doors are open–but the concept is a go, as is the project. We’re all quite excited for the chance to tell this great story again, with some new flourishes.”

These include the introduction of supernatural baddies beyond the reanimated corpses. “The creatures that awaken will have some very specific characteristics with great little backstories,” Schuermann says. “They are more ‘purposeful’ than typical zombies, for lack of a better word. Semantics, I realize. Oh, and the devil has a rather prominent role. The themes will run pretty deep, with a look at fear as a weapon or tool to manipulate and control. And I think there is some nice contemporary relevance with the idea that we’re all connected through technology and how that impacts a global society, asking the question, ‘What would Satan do if he could go viral through social media?’ ”

In general, Schuermann promises a remake that both honors and goes beyond its predecessor. “I’m aware that the original sometimes gets a few knocks for ‘vintage pacing,’ which is wholly unwarranted, but in this retelling the ante is upped in the thrills and chills for sure. It definitely will be a blend of the humor-and-horror combo that Bob Clark did so well back in 1972.”