One good dimensional bite deserves another!

When Steven Spielberg’s classic JAWS swims back into theaters in RealD 3D this weekend, Regal Cinemas venues showing it will have the trailer for DAWN OF THE DEAD IN 3-D attached. As we first reported here, George A. Romero’s zombie masterpiece is returning to 250 Regal theaters this coming Halloween weekend in a new 3D transfer, uncut and supervised by producer Richard P. Rubinstein.

This will be the first opportunity for many fright fans to see footage for the 3D DAWN. “It’s very exciting that Regal Cinemas decided to play the 3D trailer for DAWN OF THE DEAD in front of JAWS,” says filmmaker Leif Jonker (DARKNESS), who is involved in the DAWN release, “for us as fans of both movies and as the guys who put the DAWN 3D trailer together. Seeing the trailer on the big screen will help cement the fact that after all these years of waiting, these screenings are really, finally happening.”

Creating that trailer (which you can see in 2D below) “was a rewarding experience, but posed a few challenges I didn’t expect,” he continues. “We ended up searching all over the country for someone who could pay homage to Adolph Caesar’s narration on the original 1979 trailer. We had several professional and amateur voiceover artists submit auditions, but we finally found our guy, Eddie Vargas, from a post in a DAWN OF DEAD group on Facebook. Eddie is a huge fan of the movie who had developed his own Adolph Caesar impression years ago, so he really knocked it out of the park, and we were lucky to find him.

“The next challenge was figuring out how to make a 3D version of the trailer. We had quotes from two major 3D conversion companies, the lowest of which was $34K to convert our 75-second spot. In the end, we figured out how to use actual 3D footage from the feature and pulled the spot together for less than $4K.”

JAWS IN 3-D runs from today through Thursday, September 8. You can order tickets to DAWN OF THE DEAD IN 3-D here. 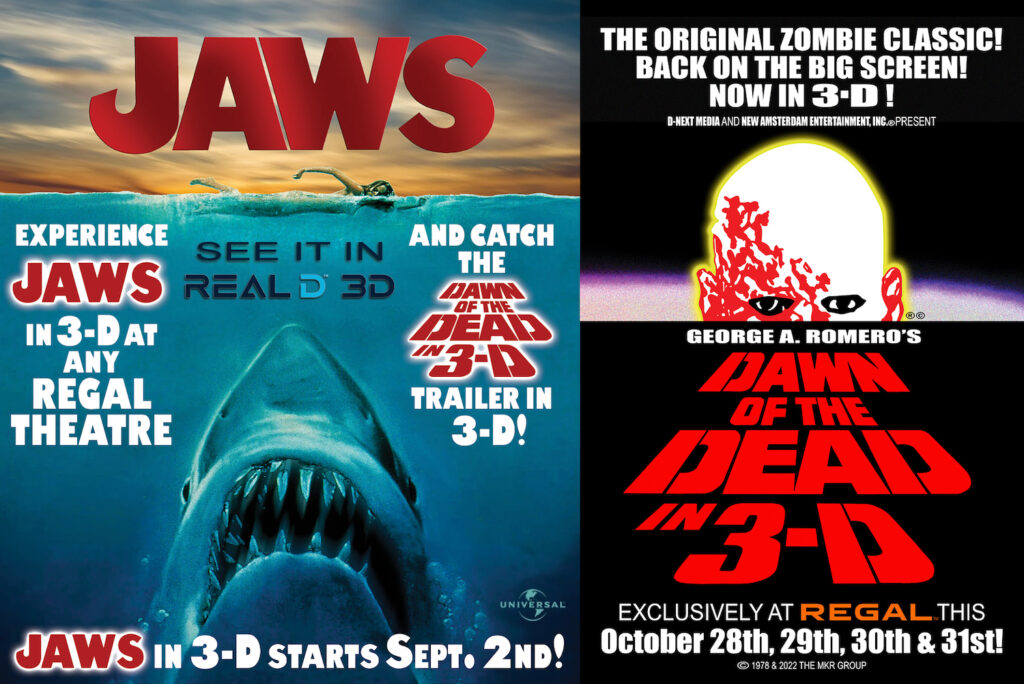