Movie Review: Dan Riddle’s “The Last Possession” Is An Intriguing Concept That Misses the Mark

WARNING: This Review Contains Major Spoilers of THE LAST POSSESSION.

There’s long been a school of thought that posits many cases of hauntings throughout the world might actually be misidentified UFO and alien encounters. Looking at those two towering Grand Poobah’s of the paranormal world, it’s easy to see striking similarities between the two: Supposed sightings of ghostly orbs move identically to what some claim to be UFOs and much of the communications through so-called “spirit boxes” resemble nothing less than some of the bizarre noises oft-times attributed to alien telephone calls (don’t ask). Books have been written on this highly speculative connection and the time seems long past due for an enterprising filmmaker to hang a fictional narrative on the subject, something that will wildly and popularly reimagine the entire horror genre. Director Dan Riddle’s THE LAST POSSESSION, alas, is not that movie.

THE LAST POSSESSION begins with a crackerjack of a setup right out of Haunted House 101. Feeling the strains of a foreclosure, Kent Peroni (in a solid turn by actor Stephen Brodie) moves his family into the home where his estranged father (Tom Proctor) recently killed himself in and, with typical horror movie logic, hopes for a fresh start. Almost immediately, however, things begin to go awry: The young father becomes easily aggravated at his two children; a blinding white light and a massive earth tremor shake the small Texas house to its foundations (something the parents weakly attribute to an earthquake and an exploding power transformer);  a large sinkhole appears overnight in their front yard. It’s not too long before the kids and the wife figure out what the audience already knows: In best Amityville Horror-style, their house is obviously haunted and it’s time to make like Speedy Gonzalez and split. Unfortunately, cash-strapped Kent doesn’t see it that way, prolonging the stay just long enough to give viewers a few more jump-scares and copping a view with his own two peepers of his nine-year-old son getting slung around his bedroom like a rag doll by an unseen force. No longer able to rationally deny the phenomenon and convinced it’s the recently defunct Peroni patriarch, the family pulls up stakes for a nearby hotel.

The film takes a deep dive into the unexpected after that setup, introducing into the paranormal proceedings a co-worker of Kent’s who claims his Granny Inez – a standout Patricia Rae – is a psychic and can help rid the house of his malevolent father. So far so good and in keeping with the outline set by other movies such as Insidious and The Conjuring, except there’s a twist: Though the house is indeed haunted by the late Roger Peroni, it turns out his spirit is cut from the same cloth as Casper and Topper; he’s a friendly ghost who is attempting to warn his son and family about the real threat that exists on the property: An actual alien entity who can jump from one body to the next. 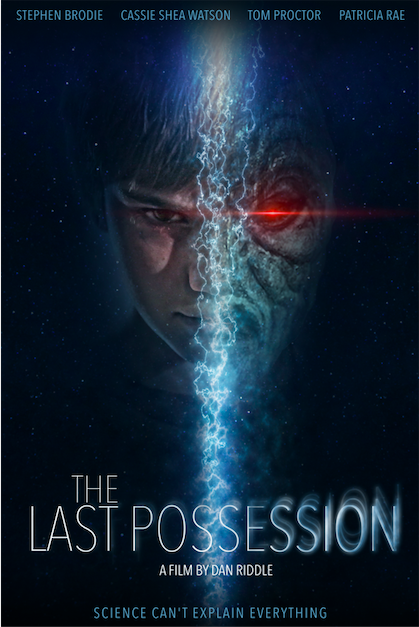 The final few minutes of THE LAST POSSESSION are a veritable calliope of what feels like hasty and ill-thought-out revelations and sloppy character beats made all the weaker for the fact that none of it feels earned: The fate of its characters matter little to us because the logic which forms the flooring of the story does not support the ultimate outcome. The final jump scare in the movie – meant to be a jaw-dropping reveal worthy of M. Night Shyamalan’s best work, no doubt – falls flat and invades the border of suspension of disbelief, unleashing what amounts to a spacecraft full of cheese.

The real problem with THE LAST POSSESSION comes not in that surprise final twist, but in the muddled script from scribe Greg Shouse and the rushed pacing of the story and its surprises by Riddle himself. In more patient hands and with a runtime that extends beyond the one hour and twenty-seven minutes allotted it, this alien invasion movie masked as a haunted house tall-tale could have made a deeper and more lasting impression. Instead, the characters (through no fault of the actors who are all quite capable) are but ghosts themselves – thinly drawn out and written outlines in search of substantive dialogue and meaningful character development. The best horror movies – think of Robert Wise’s The Haunting or Alejandro Amenabar’s The Others – plie a luxury of time in creating a spell around its viewers, casting a sensation that’s dreamlike and otherworldly as the scares are methodically and patiently rolled out. In THE LAST POSSESSION, there’s no such care taken by its creative fathers. The scares are rolled out in quick assembly-line fashion, all of which we’ve seen in a million other similar stories.

Dan Riddle’s THE LAST POSSESSION is neither fish nor fowl. It’s simply a beautifully shot and well-acted movie in search of a serviceable script to hang its unexpected story on. The UFO and ghost connection is an intriguing one that one day will get a proper film to enthrall its audiences. It’s only too bad that with all of its talented cast and crew that THE LAST POSSESSION will not be the bellwether for this new spin on a genre staple.

THE LAST POSSESSION will be available on digital and VOD on March 11, 2022.