Chris Baugh, director of Shudder’s newest original, BOYS FROM COUNTY HELL, wants you to love vampires as much as he does. One caveat: he needs you to cast aside everything you believe as the gospel truth when it comes to bloodsuckers. In his film, garlic and sunlight mean naught, and a vamp’s bite doesn’t beget more vamps. Those rules of old were penned by Bram Stoker, whose preeminent literary classic Dracula helped establish the framework for vampire mythology. But in the town of Six Mile Hill, they simply don’t work.

When Ireland’s own vampire menace, Abhartach, is resurrected through a series of unfortunate events, father-and-son duo Francie and Eugene Moffat (Nigel O’Neill and Jack Rowan, respectively) realize they’ll have to put their constant bickering aside should they have any hope of surviving the night. Flanked by friends Claire (Louisa Harland) and SP (Michael Hough), the group navigates the loss of loved ones and a hometown nearly cast into shambles, amidst a whole lot of bloodletting. An interesting hat trick that strikes a delicate balance between horror, comedy, and drama with no single portion drawing the short straw, BOYS FROM COUNTY HELL rewrites the rules in a way that forces viewers to look at a familiar concept with new eyes. Baugh taps a vein with Rue Morgue to discuss how his love letter to the vampire genre strikes at the heart of the matter with a film that’s as much about raw human emotion as it is horror, and how a spoonful of humor can help the nastiness go down. 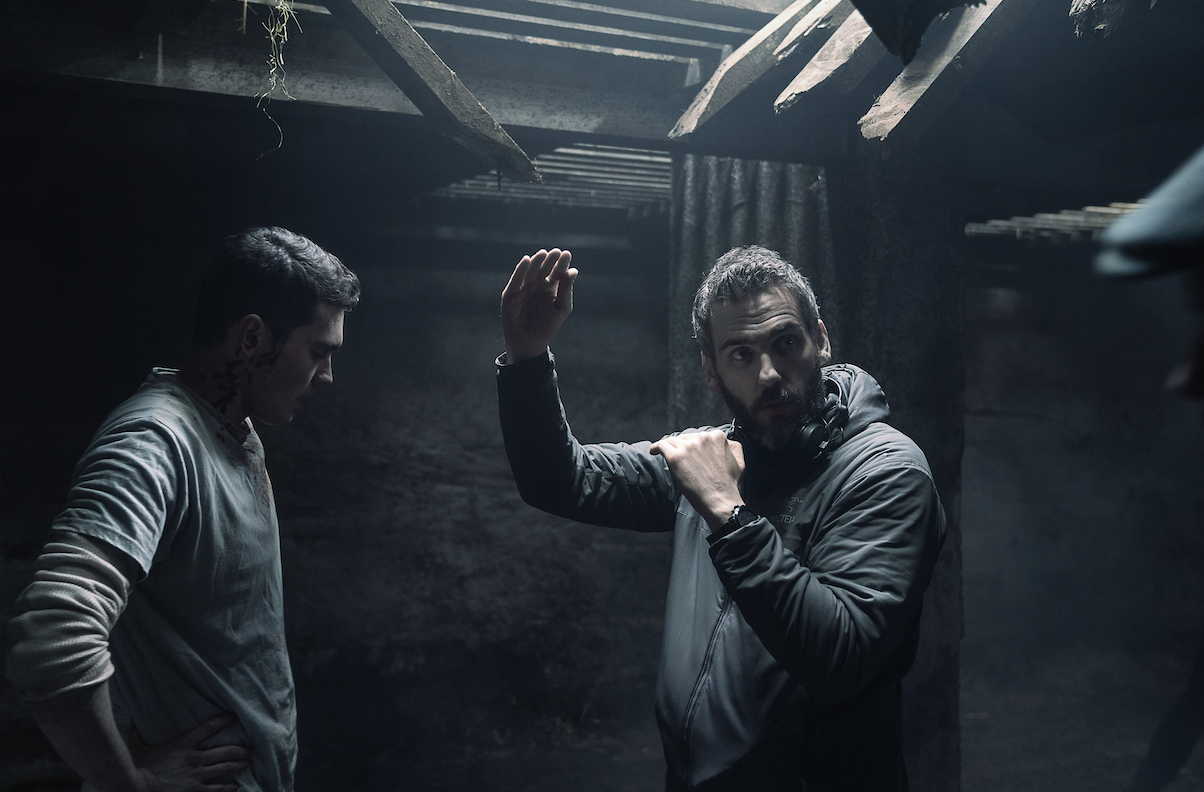 BOYS FROM COUNTY HELL takes liberties with nearly every aspect of the vampire mythology. Was there any trepidation on your part in re-contextualizing such a well-known formula?

Not really. In writing the script, my intention was always to be incredibly reverential to the vampire genre that I love but at the same time attempt to use an existing vampire mythology [the story of Abhartach] as a jumping-off point to create something that feels new and unique.

The film uses comedy in a manner that is very natural and organic; it’s there when it needs to be and feels appropriate in nearly every instance. You walk a very delicate line in trying to balance between horror and hilarity, but why not just go all-in on splatstick?

I tried to create my own specific tone by taking a set of characters who feel very authentic to a certain part of Northern Ireland and then putting them through the grinder of an incredibly heightened set of circumstances. The hope is that, if we can focus on the truth of these guys as human beings and their reactions to this overwhelming horror, then we create a humour, emotion, and pathos that will feel cohesive. It is a tricky balance to walk, but it’s the tone that most appeals to me. And at a certain level, it is instinctive. I just write and shoot in a way that is interesting and exciting to me, then hope the audience connects with it!

Audiences go into a horror movie expecting to be scared, but BOYS FROM COUNTY HELL goes much deeper and makes viewers deal with feelings of loss. Can you speak on the creative reasoning behind taking your viewers on such a rollercoaster of emotions?

It started with the characters and their stories and relationships and wanting to create a reality in the world of Six Mile Hill that felt lived in. In Northern Ireland, we have a very dark sense of humour, even when it comes to dealing with heavy subjects, so that comedy was a natural byproduct that came from the reality of the characters and their world. Further to that, I love movies and novels that take you deep into the world of the characters before the horror even arrives. I wanted to do the same thing. I wanted to give the audience a portrait of the reality of small-town life in Northern Ireland  – and more specifically the portrait of a very fractured father/son relationship – before the fun and excitement of the horror really kicks into gear.

The metamorphosis of the father-son bond between Eugene and Francie is something that many can relate to, and it shares equal footing with all of the other plot elements. Why was it so important to continue to explore their relationship throughout the movie?

That’s the heart of the movie in a way. That conflicted relationship and tough love over the family business is something that, again, feels very specific to Ireland, but at the same time is universal. It’s the kind of relationship I don’t feel I have seen a lot in this kind of horror movie, so I thought it would be an interesting dynamic to explore. You have these two very emotionally unintelligent men who can’t connect and can’t resolve the massive gulf in their relationship, and it takes a night of facing incredible horror to bring them together. Also, it just felt slightly comical to me that Eugene can NEVER do anything right in Francie’s eyes. Whether that be digging holes, running a road crew, or killing vampires, Francie’s level of simmering annoyance with his son is always there.

“I love movies and novels that take you deep into the world of the characters before the horror even arrives.”

BOYS FROM COUNTY HELL is wonderfully Irish, but the thick dialect causes some difficulties for viewers. Was that something you’d anticipated, and, as it relates to those in other countries, how do you feel it factors into the end product?

For me, the most important thing is to be authentic and true to the world in which the movie is set. And that means real accents. People talking in the same way they would talk to you if you were standing in the middle of Tyrone or Derry. My hope is that the audience will appreciate that authenticity and connect with it even if they don’t understand every little colloquialism. And the wonderful thing about streaming is that there is always the option of subtitles!

The film boasts a pretty kick-ass soundtrack, and your use of high-energy music helps shift the tone at just the right moments. Tell us a little about your musical selections and the bands that perform them.

I love soundtracks. I love pairing the right song with the right sequence. It can be hard on a low-budget movie as you have to deal with rights and fees, etc. but from the very start, I knew I wanted the world of the movie to have a specific musical identity. First and foremost, Steve Lynch provided us with an amazing score that hit every emotional and horror beat in ways that went beyond expectations. Myself and my editor Brian Philip Davis spent a long time putting different songs to different sequences. It was his idea to use an old-time rock and roll tune in one of the key horror moments and it really stands out. One of my favourite bands is The Bonnevilles from Northern Ireland and I knew they would be perfect to close out the film. We also had this idea that the owner of The Stoker [a local haunt in the film] was big into hair metal and always had it playing in his little country pub, so that seemed like the perfect opportunity to get “Dream Warriors” in there!

Your personal horror fandom shines through, with references to American Werewolf in London and bloodsucking tactics that feel more Hellraiser than Hammer. With BOYS FROM COUNTY HELL encompassing so many genre facets, what did you have the most fun exploring? What do you want your film’s lasting legacy to be?

I loved creating the horror sequences and building those moments for sure, but really the most fun was working with the incredible cast in creating the characters and having fun exploring those relationships and their camaraderie. I don’t really think about legacy or stuff like that. I was just happy to make the film exactly how I wanted and hope audiences will embrace it. That being said, I do hope it gives horror fans an insight into the character of this part of Northern Ireland while at the same time introducing them to an Irish vampire mythology that they may not have been aware of.