BUFF ’22 Movie Review: You should definitely watch out for “WATCHER”

Many horror films and thrillers have filmed in Eastern Europe for budgetary or other production reasons, but few have utilized their specific locations as adroitly or pointedly as WATCHER. The feature debut of director Chloe Okuno was originally intended to take place in New York City, but it’s hard to imagine its story playing quite as effectively there.

As Bucharest portrays itself for once in a movie, it provides a very effective backdrop for Okuno and co-scripter Zack Ford’s study of isolation, paranoia and distrust. WATCHER, which has been making its way around the fest circuit (including last week’s Boston Underground Film Festival) ahead of its general release June 3, stars IT FOLLOWS’ Maika Monroe, once again being followed. Or so she thinks. She plays Julia, freshly arrived in the Romanian capital with her husband Francis (Karl Glusman), who has accepted a marketing job there. With roots in the country, Francis has no problem fitting in, while Julia doesn’t know a word of the local language and feels like an outsider even at a friendly dinner in her own new apartment. Okuno, who previously helmed well-received shorts and a segment of V/H/S/94, immediately aligns us with Julia, eschewing subtitles for some of the Romanian dialogue so we share her sense of separation, and filming her such that she seems alone even on a busy street. 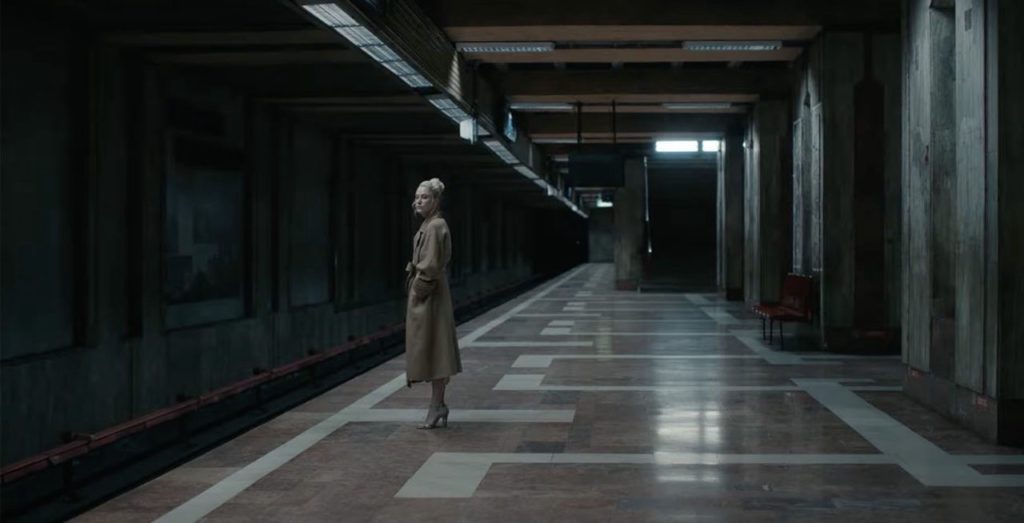 Someone does notice her, though. Loneliness and the nearly floor-to-ceiling windows in her new place inspire Julia to gaze outside one night, and she spies an obscure figure in the building across the street that seems to be looking back. And then it’s there again on a subsequent night. That’s not good for Julia’s mental state, especially when she learns that a serial killer called “The Spider” is stalking the city, claiming his latest victim not far away. And a scary encounter that begins in a movie theater and continues into a supermarket has Julia convinced that she’s the Spider’s latest target.

Or is she? Okuno and Monroe pull off a tricky balancing act in WATCHER: Some of the tension derives from the disbelief Julia encounters when she attempts to convince Francis and the police that someone’s after her, with the former attempting to be comforting and instead coming off as patronizing. While we’re on her side and want her to be taken seriously, Okuno plants just enough seeds of doubt that we can also accept that maybe the threat isn’t as serious as she thinks it is. Will WATCHER become a psychodrama of a woman losing her sense of security in an unfamiliar setting, or a psychothriller in which she’s terrorized and gaslighted at the same time?

Genre fans will recognize the devices Okuno employs and suspect how they’ll pay off, and the director skillfully teases those expectations, especially when Julia decides to get proactive and stalk the man who appears to be her stalker. Even the casting in that role of Burn Gorman, with his instantly suspicious looks, seems to be on-the-nose to a purpose, but Okuno keeps us off-balance throughout, up to a very effective scene late in the game that throws the entire situation into new relief. Monroe’s assured yet vulnerable performance is surrounded by fine, unemphatic craftsmanship, with cinematographer Benjamin Kirk Nielsen expressively capturing the well-chosen locations, backed by the uneasy chords of Nathan Halpern’s music. It all comes to a head in ways that play both fair and frightening–and a final shot that rewards attention to backstory and pays off one of the central relationships in a very satisfying manner.