YOU WON’T BE ALONE may have witches and an impressive body count, but its horror roots stop there. It is a lyric and contemplative film that looks closely at generational trauma, what it is to be human, and to love.

The film (part of the current Boston Underground Film Festival and seeing general release April 1) takes place in 19th-century Macedonia, where witches and folklore are very real. Old Maid Maria (Anamaria Marinca) is terrifying in nearly every way possible. She is covered in enough burns to look like an old-time Helen Lyle. She is an ancient witch who lives up to the destructive rep of her kind. But perhaps worst of all, her tragic story is told as a cautionary tale to children, and her aura of terror hangs over this mountain village even when she is not there. 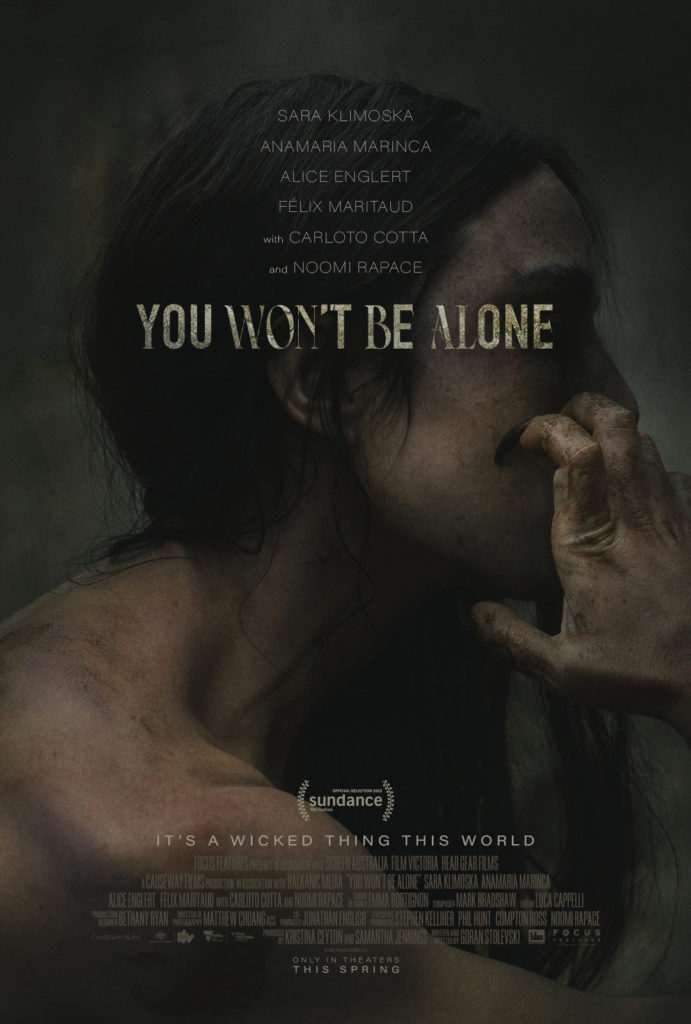 Early on in YOU WON’T BE ALONE, Maria marks a baby as her own, but promises the mother she will allow her to keep the girl for 16 years. Rather than savoring those years, the mother hides her daughter away in a cave, to live away from everyone and everything. She is completely isolated, and as a result lacks many basic skills and has no awareness of the world outside the cave. True to her word, Maria returns and the girl (Sara Klimoska) has no choice but to follow her out into the great wide open.

In learning to be a person out in the world, she is also learning to be the witch that she now is. She sees the whimsy and danger at every turn, despite Maria’s best efforts to keep her spirits low. Even with all of her setbacks, she keeps trying to find her place and her happiness.

The mechanics of this exploration is the coolest part of YOU WON’T BE ALONE. These witches can take the form of any creature. In this mythology, they can be pigs or wolves, but the young witch chooses to take human form in a village to try to understand humans. Through trial and error, she learns to talk, to be around other people, and also to love.

Sadly for us gorehounds, the deaths and physical transformations are always just off screen. We get to see a smear of blood and possibly a pile of guts, but for the most part we just hear something gross and see the reaction to the act and not the act itself. That is just not the kind of film YOU WON’T BE ALONE is trying to be.

What it is trying to be, and does so with great success, is a contemplation on what makes life special and what makes humanity worthy of all the fuss. The young witch sparsely narrates the film with the little language she can grasp, and we learn about her understanding of the world as she tries to make sense of it all. This combination of childlike wonder, stripped of romanticism and nostalgia, comes through in often broken but insightful prose. Certain phrases are repeated for emphasis, and the effect is poetic. She learns that the world is not all good or all bad, as Maria told her.

YOU WON’T BE ALONE is visually beautiful and deliberately paced, but the true star of the film is the parade of performers who are inhabited by the young witch for a time. Though the single character runs throughout the entire film, the faces and bodies on screen (including Noomi Rapace, among others) are a series of different actors. With so little dialogue, these performances are nuanced and overwhelmingly physical, and each one is as strong as the next.

The intention of YOU WON’T BE ALONE never seems to be to scare or to unnerve, which is why it is hard to argue that it is a horror film. But with witches and folk horror framing its lessons, it certainly can play in the genre sandbox.