The title SLASH/BACK might give the wrong idea about the kind of movie this is, since it has nothing to do with slashers and doesn’t take a retro approach. Instead, it’s progressive in a manner that doesn’t call attention to itself, telling a tale of kids vs. invading aliens in a culture rarely spotlighted in genre cinema, or in commercial cinema in general.

Screened at the current Brooklyn Horror Film Festival and coming to theaters and VOD/digital platforms tomorrow, SLASH/BACK is set in the small, remote Inuit village of Pangnirtung, in the Canadian Arctic territory of Nunavut. However, an American researcher is the first person we see–briefly, before he falls victim to a hungry something under the snow. This sequence has a combination of austere and forbidding natural beauty reminiscent of the opening of John Carpenter’s THE THING, before coming to focus on a group of significantly younger characters. Maika (Tasiana Shirley), Jesse (Alexis Vincent-Wolfe), Uki (Nalajoss Ellsworth) and Leena (Chelsea Prusky) are teen female pals looking for things to do and dealing with various parental strictures on a typical summer day. They decide to “borrow” a boat and take an excursion across one of the fjords, only for Maika’s tagalong little sister Aju (Frankie Vincent-Wolfe) to be threatened by a polar bear. 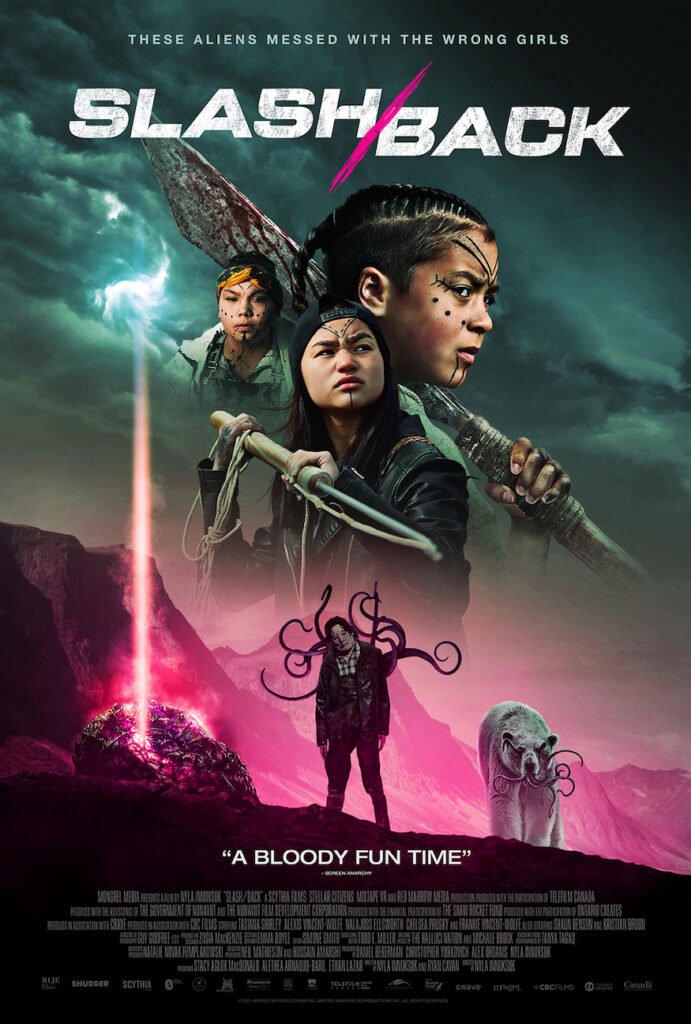 This particular bear is an even greater threat than usual, as its weird, shambling movements indicate to us, and soon to the girls, that it’s inhabited by an unearthly presence. Fortunately, Maika has been taught by her dad to be skilled with a rifle, and the casual way the movie presents these youths as being good with weapons in this hunting and fishing community is one small part of the unique identity the setting gives SLASH/BACK. It also establishes the greater theme that sets the film apart: Indigenous teens as the first and only line of defense against an alien invasion, since their parents are all off at a “Solstice Dance” when the possessive extraterrestrials make their attack.

Writer/director Nyla Innuksuk, who grew up in “Pang,” and her co-scripter Ryan Cavan wrote and filmed SLASH/BACK largely in English, rather than the area’s more prevalent Inuit dialect of Inuktitut. This results in occasional awkward line readings by the young actresses, all local Nunavut discoveries giving otherwise likably naturalistic performances, but somehow that adds to the movie’s charm. It gives SLASH/BACK an infectious “Let’s put on a show” feel, even as the movie bears a production polish belying its low budget. Guy Godfree’s cinematography captures both gorgeous landscapes and a working-class grit in Pang, and the alien effects–lots of tentacles and bodily contortions–are first-rate. The soundtrack of Indigenous music by The Halluci Nation and Michael Brook adds distinctive and appropriate flavor and tension to the young heroines’ adventures.

It’s the heroines themselves that really make SLASH/BACK stand out. While they may be typical teens with typical concerns–family issues, which boys they like and vice versa–and attitudes (when it’s suggested that the strange events may have something to do with traditional legends, one scoffs, “That’s just old people stuff they came up with before they had the Internet”)–they are very much of their environment, with Maika wearing a jacket emblazoned with “No Justice on Stolen Land.” And they’re more than capable of rallying and rising to the occasion when confronted with the extraordinary threat to their lives and their town. The film honors their fortitude, and its approach isn’t watered down due to their ages; SLASH/BACK is unrated, but its grisliness and occasional profane dialogue would definitely warrant an R.

Still, viewers of its stars’ ages will likely eat this up, and probably look past its ethnic specificity to appreciate the universality of its basic concerns. That combination of the fresh and the familiar is at the core of SLASH/BACK’s appeal; there are past films one could somewhat cite as precedents, like ATTACK THE BLOCK and RARE EXPORTS: A CHRISTMAS TALE, but there’s also nothing quite like it out there.